Couple takes the plunge, going from jobless to business owners 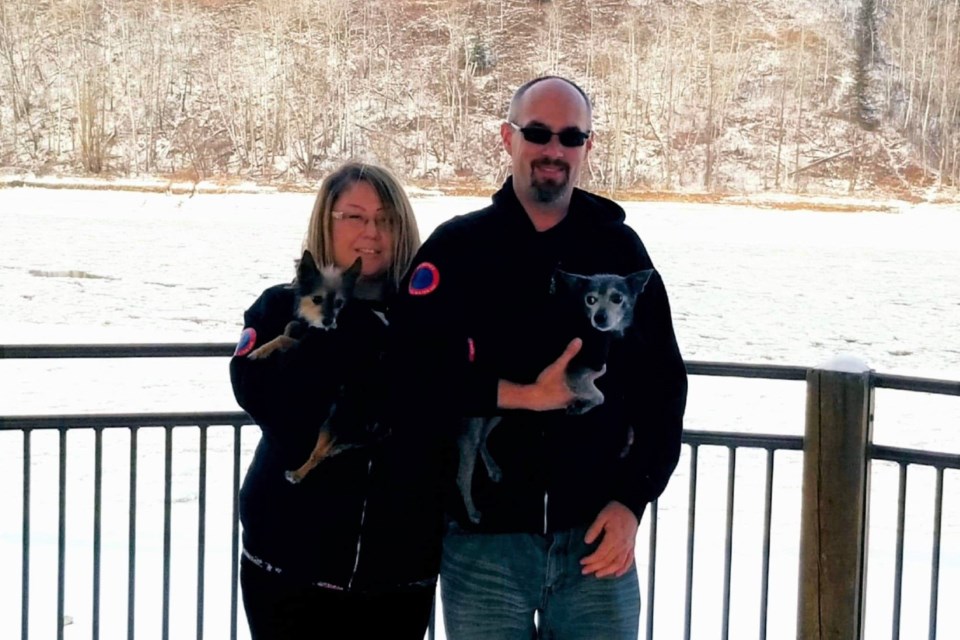 Elena Marin and Tyler Martin, with Chico and Chewy, are all smiles after moving from Edmonton to Athabasca this year. Photo submitted.

A couple made a 180-degree turn during COVID-19, going from unemployed in the big city to operating a water treatment company in a small town.

Thanks to a close family member's retirement, Tyler Martin and Elena Marin, both 36, took the plunge and moved from Edmonton to a new life in Athabasca, population 2,965.

"We said to ourselves, 'We've got nothing to lose.' It was an easy decision," said Martin.

He said the business opportunity was crucial but also admitted rising COVID-19 numbers and a high crime rate in Edmonton also factored into their decision.

Martin says he was nervous when they arrived in mid-summer to take over Athabasca Water Systems Ltd. from his father, Neil.

"It was scary to begin with because it was such a big deal. But then it was super busy in August. We soon forgot about it," said Martin.

The catalyst for change came a few months after the pandemic hit Alberta.

Neither was working; Marin had been laid off from Canadian Tire and Martin was several months removed from off-and-on employment as an electrician.

With time to spare, Martin took regular drives up to Athabasca and spent time working with his dad – a routine he'd carried out in previous years.

Then, in early summer, Neil Martin dropped a challenging surprise on his son.

“He asked me if I wanted to buy the business," said Martin, who also discovered his parents were going to retire to B.C.

Martin and Morin, partners for 12 years, discussed the opportunity and jumped at the chance.

"It was a pretty quick decision. I knew the business from working with my dad over the years, so we decided to take the plunge."

The couple found the first three months rather chaotic as they ran the business while moving between two different houses with their two dogs – a Chihuahua named Chewy and a Yorkie named Chico.

"When we got here in August, the house we were renting was for sale. Then it sold and we had to move. Now we're renting a house that isn't for sale. We should be here for awhile."

Martin, using a large working van, handles the service calls for rural customers with water wells – offering everything from pump installation to applying a reverse osmosis process. Morin takes on a variety of roles including managing work assignments, helping with installations and "handling the computer."

They have customers covering a large rural area, stretching to Lac La Biche and Boyle.

"We have no real issue dealing with COVID-19 when we go to a house because there are so few cases in this area," said Martin, adding, "We offer to wear a mask but usually we don't. We're usually just going into someone's basement to troubleshoot or to make repairs."

An official with the Athabasca District Chamber of Commerce was not aware of a similar local case but said area residents and businesses have grown closer since the pandemic hit.

“People have been more inclined to support local business owners since COVID-19. People used to run to Edmonton to get something. It's more shop local now," said Jennifer Oba, the chamber's executive assistant.

While there are just seven active cases in the county – with a population of 13,000 – COVID-19 restrictions have affected the area.

“We're doing as good as can be expected,” said Oba, “But people do tend to pull together more in a small town.”

After three months, the new couple in town is already dreaming about the future.

“The people here are very friendly,” said Martin, adding, "Our long-term plan is to grow the business and stay here."

He said Athabasca is not only a great place to walk their dogs, but it’s also ideal to enjoy activities like quadding, snowmobiling and fishing.

Gary Poignant is a freelance writer with Great West Newspapers. This story was funded by the Facebook Journalism Project Supporting Local News Coverage of COVID-19 Program via the Local Media Foundation.

Bucking the trend of business closures
Nov 19, 2020 6:49 PM
Comments
We welcome your feedback and encourage you to share your thoughts. We ask that you be respectful of others and their points of view, refrain from personal attacks and stay on topic. To learn about our commenting policies and how we moderate, please read our Community Guidelines.