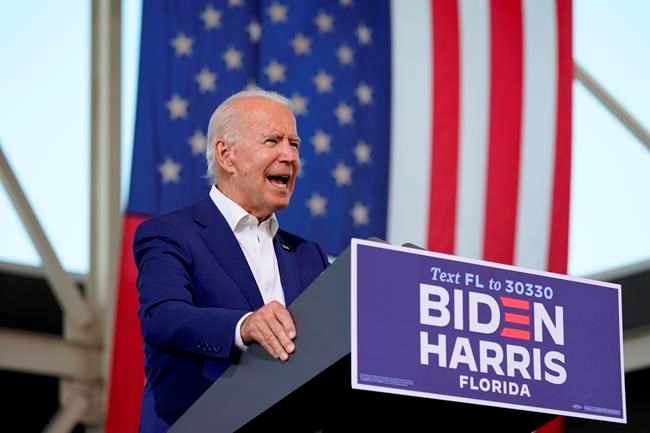 AIRDRIE, Alta. — Alberta Premier Jason Kenney says he is still hopeful about the future of the Keystone XL pipeline, even if the Democrats win the U.S. election next month.

Democratic candidate Joe Biden has promised to kill the project if elected president, but Kenney says his government has been speaking with officials on both sides.

"We're in constant contact with American senators and congressman on both sides of the aisle, governors and state legislators."

TC Energy has approved construction of the US$8-billion project to transport up to 830,000 barrels a day of oil from Alberta to Nebraska, which is about one-fifth of all the oil Canada transports to the United States each day.

The Alberta government has agreed to invest about US$1.1 billion as equity in the project and to guarantee a US$4.2-billion loan.

Kenney said a number of U.S. trade unions and Indigenous groups on both sides of the border will speak in favour of the project if there's a change in administration.

"It would send a very, very negative message, should a future U.S. administration cancel a project that's partly owned by the Canadian government," the premier said. "It would really undermine the single most important trade relationship that the United States has in the world."

The project was sidelined in 2015 by former U.S. president Barack Obama when Biden was his vice-president.

President Donald Trump approved it when he took office.

"I've been against Keystone from the beginning," Biden said last week in an U.S. television interview.

"It's the tarsands that we don't need, that in fact (are) very, very high pollutant."

"The U.S. refineries on the Gulf Coast require huge amounts of heavy crude oil and, if it's not coming from Alberta, then it's coming from the socialist dictatorship and OPEC country of Venezuela, so we think we have a very strong argument to make," he said.

"Of course we're not going to interfere in the U.S. election ... but whoever's elected, we'll be making these points as strongly as we possibly can."

This report by The Canadian Press was first published October 15, 2020.

Calgary Flames sign Russian defenceman Nikita Nesterov to one-year contract
Oct 23, 2020 4:25 PM
Comments
We welcome your feedback and encourage you to share your thoughts. We ask that you be respectful of others and their points of view, refrain from personal attacks and stay on topic. To learn about our commenting policies and how we moderate, please read our Community Guidelines.