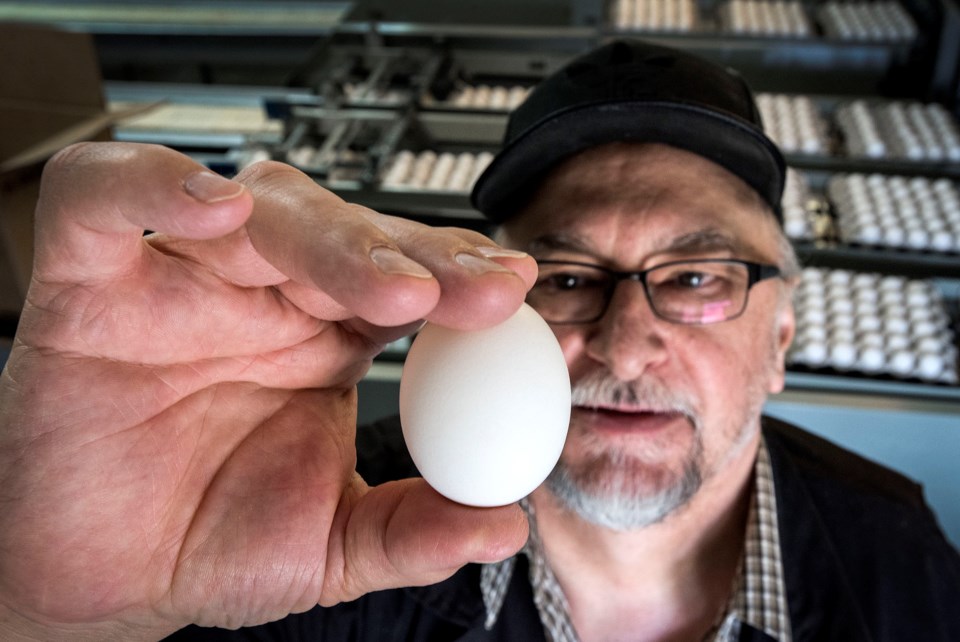 EGGCELLENT – Morinville Colony egg barn manager Paul Wurz examines one of the roughly 20,000 eggs the farm produces each day. Only Grade A eggs make it to stores or restaurants – any cracks or defects relegate an egg to baking or egg products. DAN RIEDLHUBER/St. Albert Gazette

This is part of a series examining the ways the COVID-19 pandemic has changed Alberta agriculture, creating unprecedented challenges for farmers. Read our introduction to the series here.

Paul Wurz, the laying barn manager for Morinville Poultry, part of the Morinville Hutterite Colony, said they lost a lot of business when restaurants closed down, but consumers made up for that drop through their increased desire for eggs at the grocery store.

“The demand for eggs has always been there for us,” Wurz said.

The Morinville Hutterite Colony delivered around 500 cases – made up of 15 dozen eggs per case – each week to restaurants, and another 200 to 240 cases to grocery stores, before the shutdown.

Once restaurants closed, demand for their products surged in grocery stores, and Wurz found himself getting calls from shops across the province trying to source eggs. The 500 cases of eggs he would have delivered to restaurants got snapped up by retailers.

Jim Vercammen, a food supply economist at the University of British Columbia, said the egg industry is able to produce whatever level it needs to because it is supply managed.

“Over the years, production quotas have been really fine-tuned to exactly what the restaurants want and what consumers want,” Vercammen said.

When COVID-19 shut down restaurants, grocery stores were also rationing their eggs because consumer demand surged in retail settings, which led Vercammen to believe consumers picked up most of the egg market dropped by institutions and restaurants.

“I think it's pretty easy to take eggs that were destined for restaurants and to revert them to retail,” Vercammen said.

David Webb, spokesperson for the Egg Farmers of Alberta, said Wurz's experience was a common one for the industry, as the consumption of eggs at home increased after the pandemic shut down restaurants.

“Retail roughly offset the decline in sales that we saw through for food service and industrial product demand,” Webb said.

Part of the reason demand surged in grocery stores was because families were eating breakfast together at home more regularly.

“The one thing that we've seen through our research over the years is that eggs typically are one of the top foods for weekend breakfasts. And I think with families being home and able to dedicate more time to spend time with family throughout the week now we're ... seeing more (families) sitting down for the big family breakfasts during the week,” Webb said.

Another factor driving egg sales is the sudden surge in baking at home.

Webb said it’s not exactly simple to redirect large cartons of eggs destined for restaurants into grocery stores, but overall the process in manageable for producers.

“From what I've heard, some of the value chain partners – like the processors – are certainly feeling it,” Webb said. “So far for most farmers, it has pretty much been business as usual.”

Wurz immediately began fielding calls from grocery stores once the pandemic started and he was easily able to get his eggs, that were once destined for restaurants like Cora’s, into stores.

Wurz supplies places like the Italian Centre Shop and H and W Produce with eggs. He was getting calls from grocery stores as far away as Slave Lake asking to deliver eggs.

Because Morinville Poultry has its own egg grading system in-house, Wurz is able to get his eggs out to stores within a day of them being laid.

“We managed to bring eggs sometimes that are under a day old,” Wurz said, giving their business the ability to respond quickly to consumer demand.

He said he's determined to help out all the stores calling him, as he wants to make sure consumers never see empty shelves.

“I’ll never say no to anyone,” Wurz said.

“We tried to keep (the stores) going as much as we could ... we made sure that everybody has some (eggs) on their shelves because you don't want to walk in a store without stuff on the shelves, especially chicken and eggs."

Jennifer Henderson covers rural Alberta matters under the Local Journalism Initiative, which is funded by the Government of Canada.