Terrell Edwards learned about service and care as a young boy of eight or nine, when his dad would take him to see his great grandmother in the senior's home. Decades later, Edwards still visits care homes, this time volunteering his time and talent with Balcony Serenades, the name he gives to the hour of music he performs at various local senior's facilities for residents to enjoy safely from their balconies.

Complete with speaker, microphone, back track and dancers, Edwards make the parking lot his stage, belting out upbeat songs from his repertoire of Motown hits, pop songs and standards for appreciative residents. And judging by the energy and applause he's getting back from his audience, it's a special time for all involved.

"There's a transformation that happens in the hour I'm there. People first start tapping their toes, then clapping their hands. By the third song many are up on their feet, singing along," Edwards said. "This is one of the most fulfilling things I've done, being able to offer a moment of connection through music in what is such an isolating time."

"I believe we're here for each other," added the musician, who performs regularly in Edmonton under the Terrell Edwards Music banner and with the locally-based Rat Pack (who've opened for Jay Leno here and in Las Vegas). The affable entertainer also offers up his voice to aid charitable events in the city, recently headlining a Night of Motown at the Jubilee in support of Alzheimer research.

"If I'm now in a position in my life where I can share my gift, then I want to do that for the folks least able to get out," he said.

As word has spread about Edward's uplifting set, the singer has even done shows outdoors in city neighbourhoods, once making music on a residential street in front of the home of a terminally-ill woman at her friend's request. All area residents, including those who've been house-bound for weeks, are able to enjoy the impromptu musical moment.

"Even during this difficult time with COVID-19, I marvel at the goodness in the world--Terrell's parking lot concerts are an example of that," said Izabella Roth, CEO of Christenson Communities, who has brought Edwards music to several of the organization's independent living and designated supportive living facilities in Edmonton.

"One of our biggest hurdles through the pandemic has been the social isolation and the toll that takes on staff and residents. We're able to start some outside visits now, and have faciltated walks with residents," she said. "Residents are finding their own ways to stay connected to each other, with hallway meals or hall yoga. Some come downstairs with pool noodles for six-foot social distancing, or call out chess moves during games across the hall from each other. It's critical to address mental health for our staff and residents, and these are ways to do that."

Edwards said he'll keep up his weekend balcony serenades, "as long as we're needed, and I have the energy to go. We're gonna go on." 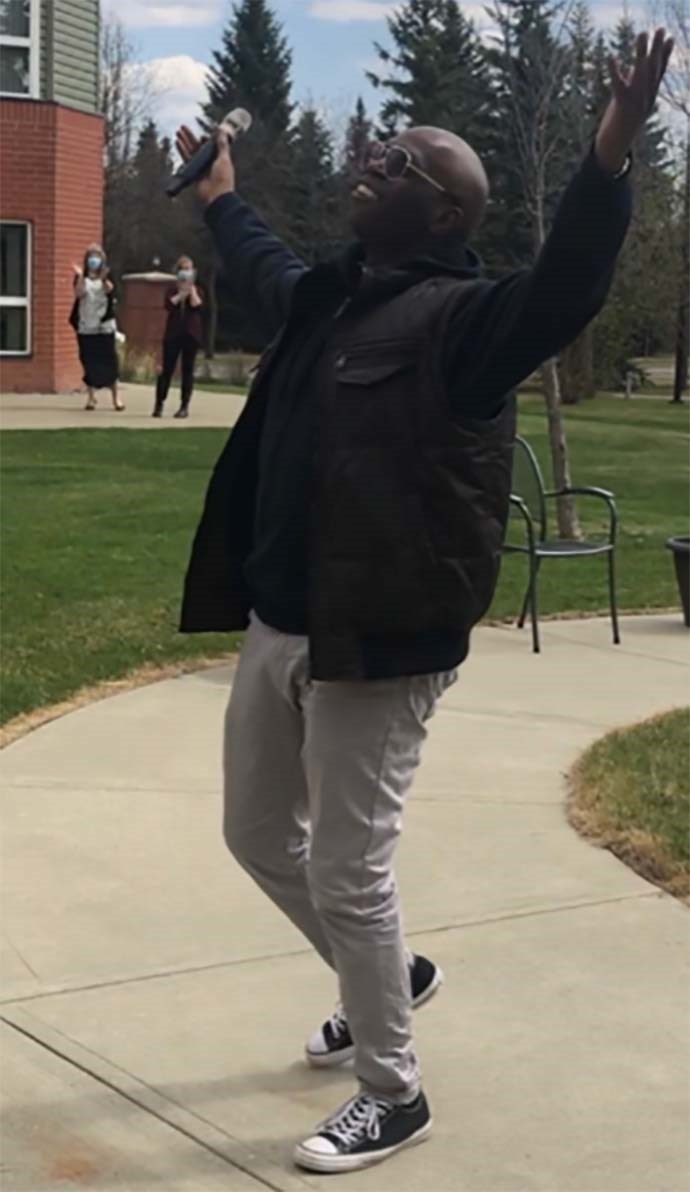 Pieridae Energy says engineering company seeking exit from Goldboro LNG deal
Jul 13, 2020 3:56 PM
Comments
We welcome your feedback and encourage you to share your thoughts. We ask that you be respectful of others and their points of view, refrain from personal attacks and stay on topic. To learn about our commenting policies and how we moderate, please read our Community Guidelines.