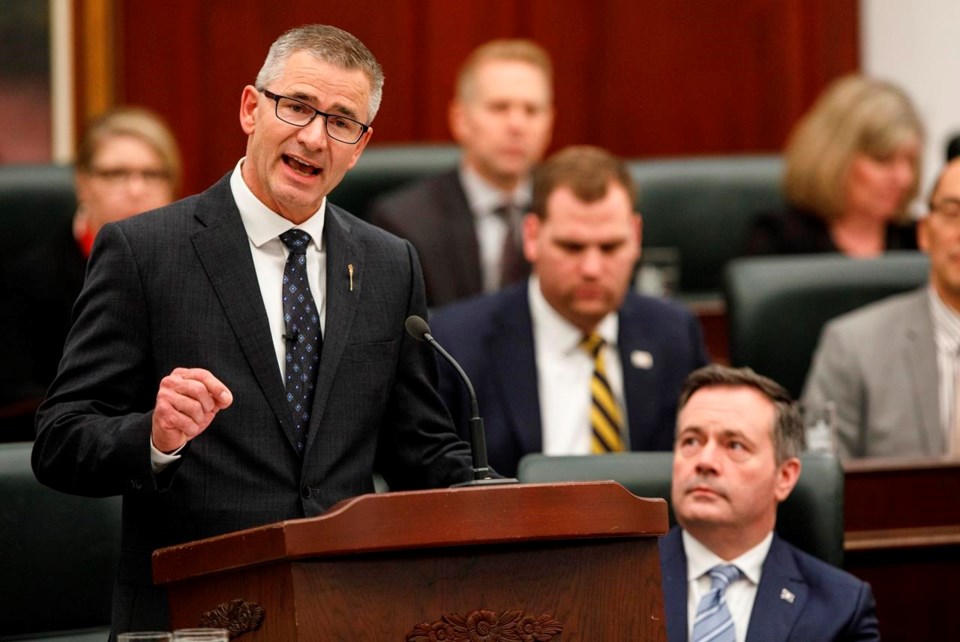 EDMONTON — The Alberta budget is counting on oil and gas bouncing back while recognizing it's time to put more money and effort into areas such as high-tech and tourism.

But with a bottom line still deep in the red, Premier Jason Kenney's government continues to hold the line on program spending while pursuing job, benefit and salary cuts from thousands of public-sector workers.

"We recognize that our unemployment rate remains stubbornly high in this province," Finance Minister Travis Toews told a news conference Thursday before introducing the 2020-21 budget in the legislature.

"While we've had a jobs focus from Day 1 as a government, we will be putting an even finer focus on job creation going forward."

It predicts better times ahead in the oil sector as pipeline projects come on line and exports increase. Natural resource revenue, about 10 per cent of total income, is expected to grow by 15 per cent by 2022-23.

The budget forecasts the oil benchmark West Texas Intermediate to average US$58 a barrel in the upcoming year. It is currently hovering at about $50 due mainly to the novel coronavirus outbreak that is reducing demand in China.

"We are not predicting a boom time in the next two years. These projections I believe are credible, but they're cautious," said Toews.

It's a government in need of good news.

Kenney's United Conservatives were elected last April on a promise to focus on oil and gas and bring jobs back to Alberta by reducing the corporate income tax rate and red tape.

But since last June, 50,000 full-time jobs have been lost. The unemployment rate was 6.9 per cent in 2019 and is forecast to be 6.7 per cent this year. The province is aiming for five per cent.

Kenney has been criticized for scrapping targeted tax incentives brought in by the previous NDP government to lure high-tech startups.

To counter that, the budget's signal feature is what's being called a "Blueprint for Jobs." Its centrepiece is $200 million to support research and innovation, and to attract talent in areas such as artificial intelligence, aviation, tourism and financial tech.

On the expense side, the government continues to follow the advice of a third-party panel chaired by former Saskatchewan finance minister Janice MacKinnon. The panel found that Alberta is paying more and getting less in return for its public services. It urged streamlining and reform, rather than tax increases, as the best way to balance the books while not compromising service.

To that end, the budget maintains operational funding at current levels for core services: $8.2 billion for kindergarten to Grade 12 education and $20.6 billion for health.

The Opposition NDP has said that when population growth, inflation and other factors are weighed in, those numbers represent significant cuts affecting front-line workers and forcing families to pay more for services such as school busing.

NDP Leader Rachel Notley disparaged the budget as a plan for more public sector cuts and service fee hikes underpinned by unattainable growth projections that are out of step with private sector forecasts.

"He refuses to accept that his economic plan has failed. And instead of reversing course, he is doubling down.

"Albertans will pay more. Much more."

The government is forecasting it will spend $26.7 billion on public-sector compensation with continued tight controls on salaries and compensation. Full-time equivalent jobs are expected to drop by 1,436 this year, mainly through attrition.

Guy Smith, head of the Alberta Union of Provincial Employees, said the budget is more fuel for the smouldering dispute between its members and the government.

"I thought this government was about creating and supporting jobs, and all we're seeing is job losses in the frontlines of the public service," said Smith.

"Albertans are going to notice it when they try to get services from the province."

Funding for compensation to doctors is to remain stable at $5.4 billion, but the Alberta Medical Association says coming changes to billing will be devastating to many rural and family practices.

The government still plans to have the budget balanced before the end of its mandate.

This report by The Canadian Press was first published Feb. 27, 2020

Man charged after licking product in store as part of 'COVID Challenge:' police
Apr 8, 2020 1:55 PM
Comments
We welcome your feedback and encourage you to share your thoughts on this story. We ask that you be respectful of others and their points of view, refrain from personal attacks and stay on topic. To learn about our commenting policies and how we moderate, please read our Community Guidelines.