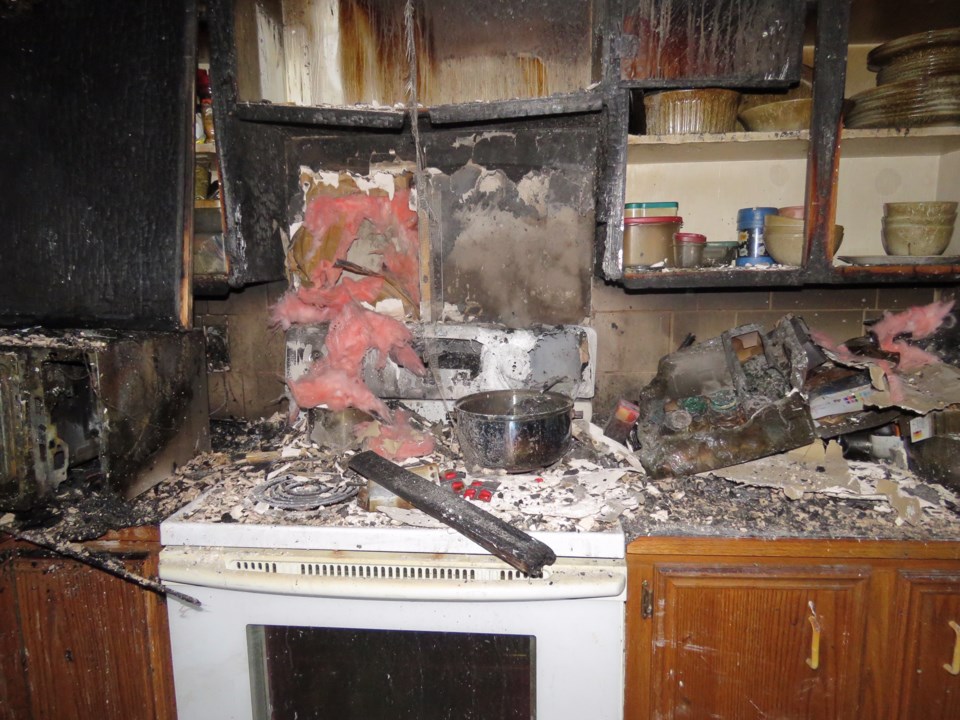 When Irene Nelson was in her 20s, the oil she was heating to make french fries burst into flame. She immediately grabbed the cast iron pan by the handle and put it in the sink just as sheer curtains hanging on the window above also caught fire.

In a panic, Nelson put the still-flaming pan on the tile floor, grabbed a tea towel and beat the flames on the melting curtains. When that fire was out, she grabbed a cover to smother the flames in the pan.

A burn mark on the tile floor was a reminder of the event and even now, fifty years later, Nelson remembers how lucky she was that day. She could have been burned, and damage to the kitchen could have been much worse.

The startling fact is that fire will double in size in just 30 seconds. And Nelson's story is an example of what not to do in case of an oil fire.

Kitchen fires - A Safe Kitchen is a Prepared Kitchen - is this year's theme for Fire Prevention Week, October 4-10. Courtney Tupker, a fire prevention officer with Edmonton's Fire Rescue Services, said kitchen fires are the most common of indoor fires, and the leading cause of injuries and death in the home.

"When cooking, especially if using grease or oil, make sure you stay at the stove," said Tupker, adding that any distractions, being tired or even drowsy from medication or alcohol is also a concern. "The number one rule is to stay alert, and never leave the cooking unattended."

Tupker said when heating oil in a pan or pot, have the lid or even a cookie sheet handy, so that if it does catch fire you can easily cover the pan to smother the flames--which need oxygen to burn. "Then turn off the element and just leave it. Don't try to move it because the bottom of the pot could be burned out, or you could splash yourself," she said.

It may feel instinctive to put water on the grease fire, but don't, added Tupker, as oil and water really do not mix. "It goes against our basic thoughts--things we've been taught--to put water on it or get out of the house, so it's about retraining our brains when we're cooking," she said.

Tupker said a fire extinguisher is good to have, but it's only good for small fires and for those who know how to operate the unit.

"If the flames do not go out, leave your home immediately and call 911. Practicing your escape route will help override panic in case you have to leave," Tupker said. "You want to know what to do before an emergency happens and not when it happens."

Carol Henke, a Calgary Fire Department information officer, said the service responds to cooking-related calls virtually every day. This year, that includes 1,477 false alarms where smoke triggered an alarm without a fire, and 129 incidents where cooking oil ignited and did cause a fire.

Suncor says end of Alberta oil quotas a "positive signal" as it reports $302M loss
Oct 29, 2020 1:38 PM
Comments
We welcome your feedback and encourage you to share your thoughts. We ask that you be respectful of others and their points of view, refrain from personal attacks and stay on topic. To learn about our commenting policies and how we moderate, please read our Community Guidelines.