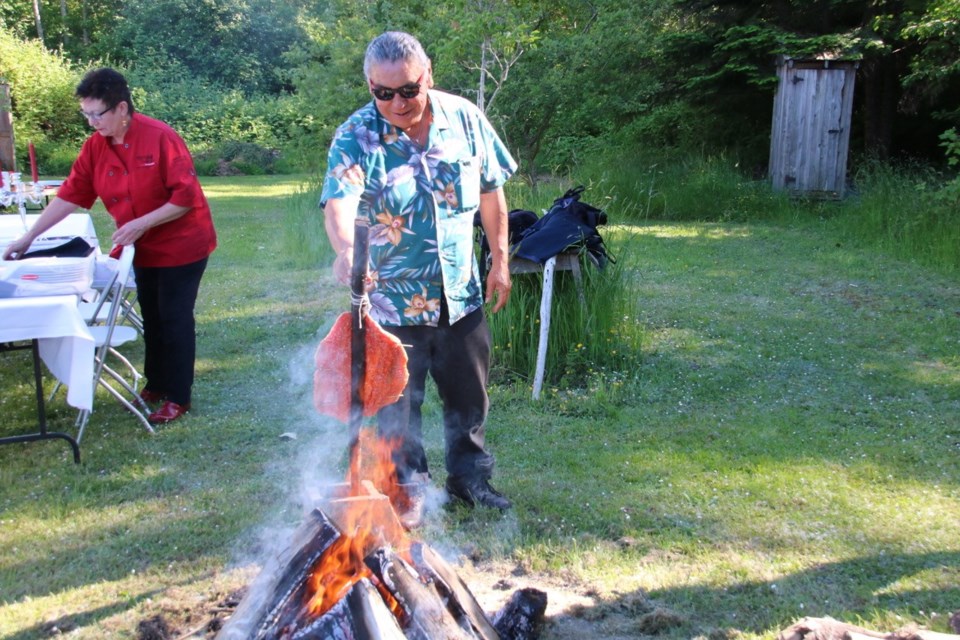 Leslie McGarry represents five generations passionate about bringing cultural awareness and promoting her heritage. Her legacy began with her great, great grandfather, George Hunt who worked with anthropologist, Franz Boaz to record the cultural heritage and practices of her people, Kwakwaka’ wakw.

She is also a great, granddaughter of the late Chief Mungo Martin and the eldest granddaughter of the late Chief Henry Hunt, both of whom were internationally renowned artists as well as Master Carvers for the Royal B.C. Museum’s totem pole restoration project. Leslie brings this knowledge of indigenous people and her family heritage to her work as a First Nation Cultural Liaison Officer, especially with the Royal B.C. Museum.

The Royal B.C. Museum has First People’s galleries, central of which is Totem Hall, featuring monumental carvings of the Kwakwake’wakw and other communities. The magnificent carvings portray styles used by 19th century coastal villagers. The museum also has a living language exhibit where visitors can learn First Nation languages.

Chef Shirley Lang, who is of Cree Nation descent, expresses her culture through culinary skills. Operating Kitchen of Distinction from her Victoria home, Lang said she hates racism and “the only way I can help resolve it is by cooking our food." Offering delicious food, wines and surreal artisan creations, Lang treated our group of six to lovely seafood creations at her Chef’s Private Table, prepared using indigenous ingredients and paired with indigenous wines.

Lang learned cooking from her mother and grandmother, who made rustic food using meat and poultry they raised on their farm with the freshest and finest ingredients they planted and harvested. Inspired by the world fusion cuisine, Lang adds her own twist to traditional recipes taught by Moroccan, Spanish, Middle Eastern, East Indian and Persian chefs.

The grand finale of our meal included feasting on wild sockeye salmon, traditionally cooked over an open fire on sticks by Tsawout elder, Earl Claxton. This was supplemented with freshly picked wild edibles including wild Oregon grape dressing with a Cree bannock and raven spirit bread created by Lang.

We also enjoyed a hands-on experience of tasting and learning the traditional uses and health benefits of seaweed cultivated from the Sooke area by Amanda Swinimer, owner of Dakini Tidal Winds.

“Edible seaweeds and medicinal plants from the local forest and ocean send a powerful message that our environment has healing and economic benefits,” said Swinimer, a marine biologist.

A shining example of successful indigenous achievement is that of the Songhees, who live on the southern tip of Vancouver Island, the San Juan and Gulf Islands. For years, First Nations peoples have called Victoria home and their ancestral influence is everywhere, especially in their totem poles. One of the world’s tallest freestanding totem poles is located at the Beacon Hill Park in downtown Victoria.

In 2014, the Songhees elders decided to combine food and culture by starting the Songhees Seafood and Steam food trucks, which offer a vast menu with fresh local ingredients. The venture has popularized Songhees culture, tradition and food in Victoria and the surrounding region.

Indigenous culture, tradition and food is celebrated all over Canada each June during National Indigenous History Month. As well, the Indigenous Tourism Association of Canada (ITAC) assists indigenous people own and operate restaurants, hotels, art galleries, cultural experiences, tours and more.  See indigenoustourism.ca for packages and ideas on exploring indigenous food and culture in your own province or around the country.

Mansoor Ladha is a Calgary-based journalist, travel writer/photographer and author of Memoirs of a Muhindi: Fleeing East Africa for the West and Portrait in Pluralism: Aga Khan’s Shia Ismaili Muslims.

RCMP investigating after far-right groups disrupt anti-racism rally in Alberta
Sep 22, 2020 7:45 PM
Comments
We welcome your feedback and encourage you to share your thoughts. We ask that you be respectful of others and their points of view, refrain from personal attacks and stay on topic. To learn about our commenting policies and how we moderate, please read our Community Guidelines.