Looking forward to 2021 in Edmonton theatre 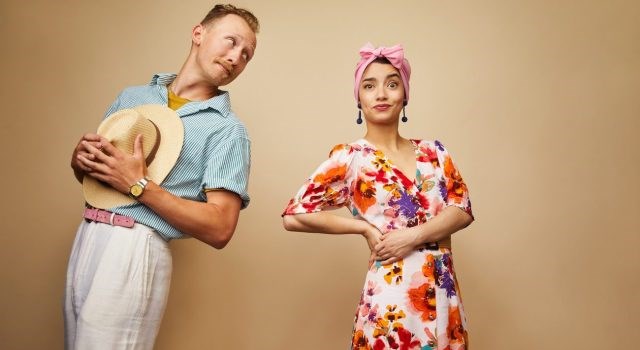 Braydon Dowler-Coltman and Christina Nguyen in Much Ado About Nothing, Freewill Shakespeare Festival. Photo by Ryan Parker.

I know what you’re thinking.… The world has been so chaotic and unpredictable this past year that you’d have to be crazy to ink in a calendar of upcoming theatre events.

But one thing that 2020 has taught us is that theatre artists will find a way. In a performing arts industry devastated by the pandemic they’ve cancelled, postponed, planned, unplanned, re-planned, experimented; they’ve gone to extraordinary lengths. So we are, to put it mildly, looking forward to 2021. And why shouldn’t we? It’s bound to be a better year: hold that thought.

To whet your appetite, here’s a selection of upcoming theatrical engagements that will happen, one way or another, or in ways yet unforeseen. Pencil them in; question marks hover over the dates.

And this, I need hardly add, is just a sampling, and a start: there will doubtless be more, created within ever-mutating parameters, as live theatre gradually returns to live-ness. Because unlike the government hypocrites that proclaim them whilst weasling out of them, theatre works creatively within the social contract.

•Northern Light Theatre’s season, which began in stellar fashion with a live November production (for a tiny, distanced, masked audience in the big Westbury theatre) of We Had A Girl Before You, continues January 22 to 31, this time online, with another solo show. The Look, a black comedy by the Australian playwright and screenwriter Alexa Wyatt, is about an aging woman, the former face of Estelle Cosmetics, charged with training her replacement. Linda Grass stars in the Trevor Schmidt production. The $30 streaming tickets are available at northernlighttheatre.com.

•The theme of the 9th annual SkirtsAfire Festival (March 4 to 14) might be a mantra for the times: The Distance Between Us. The mainstage production, Makings of a Voice by and starring singer-songwriter folk artist/musicologist Dana Wylie, is billed as a “theatrical song cycle,” spun from the creator’s unusual personal story. The production, directed by Vanessa Sabourin, marks the welcome return to theatre of Wylie, a charismatic presence onstage (I still remember her in a Tim Ryan production of the Jeanine Tesori musical Violet lo these many years) who left the world of theatre to be a folk/roots artist.

DRAFT #1,000: At Edmonton’s largest playhouse, the Citadel, resourceful artistic director Daryl Cloran has spent the last 10 months hoping, and then creatively reshuffling and re-scheduling his 2019-2020 and 2020-2021 seasons, over and over (not to mention making a film version of the Citadel’s $1 million production of A Christmas Carol).

Will this be the year we finally get to see The Garneau Block, Belinda Cornish’s adaptation of the hit Todd Babiak novel, cancelled last March 13 after the last dress rehearsal? The answer is written (in pencil) in the stars. The set is currently gathering dust on the Maclab stage waiting for the doors to re-open.

The most current iteration of the plan is that it would be part of a “spring (2021) mini-series” of full-bodied productions originally programmed for the 2019-2020 season, along with Peter Pan Goes Wrong, Matthew MacKenzie’s Bears (a collaboration between Punctuate! Theatre and Alberta Aboriginal Arts,) and Erin Shields’ adaptation of Jane Eyre.

Meanwhile, the Citadel’s Horizon Series LIVE, a trio of small-cast shows which began with the heartwarming A Brimful of Asha (available for streaming through Jan. 10), is now an online venture. Mary’s Wedding, a Métis version of Stephen Massicotte’s Canadian classic by Tai Amy Grauman, is up for streaming till the end of January (see the 12thnight review HERE). Upcoming is Heaven, a new solo play by Calgary playwright Cheryl Foggo (John Ware Reimagined), set in Alberta’s Amber Valley, settled by  black pioneers from the southern U.S. in the early 20th century. Patricia Darbasie’s production stars the multi-talented Helen Belay.

ONLINE ADVENTURES AT Theatre Network: (a) Read and discuss: Theatre Network launches a new book club this month. When you sign up, you get a (free) copy of a Canadian play in the mail, thanks to Talon Books. Then you get to discuss it on Zoom with a star Edmonton playwright. First up is Darrin Hagen, leading a discussion of Michel Tremblay’s seminal Hosanna (Hagen starred in a 2015 Theatre Network production). Details await on February’s meet-up; it’s led by the sibling team of Hunter and Jacquelyn Cardinal, who brought us Lake of the Strangers in 2019. Registration is free; donations are encouraged.

(b) Sneak previews: a quartet of new plays commissioned by Theatre Network, and destined for premieres at the new Roxy Theatre in 2022, get introduced to audiences first, in a monthly online Sunday afternoon series. Tune in to excerpts, playwright interviews, illustrations, music, design ideas perhaps — all depending on the play and what stage of development it’s at. Calgary-based Eugene Stickland’s new play, about the reclusive Saskatchewan-born abstract painter Agnes Martin, is first up. The series includes Joan Upside Down by Colleen Murphy (The Society for the Destitute Presents Titus Bouffonius, Armstrong’s War, Pig Girl), a new play by Hunter and Jacquelyn Cardinal, and Darrin Hagen’s much-awaited play about Edmonton’s infamous bath house raids.

GETTING ALL SHOOK UP: The Mayfield Dinner Theatre re-opens April 13 (through June 13) with Matt Cage’s One Night With The King (not a show about Henry VIII). Edmonton audiences will remember Cage, an award-winning Elvis tribute artist, from his Presley-ian contributions to the Mayfield’s excellent 2019 Million Dollar Quartet. A Closer Walk With Patsy Cline follows at the Mayfield in the summer.

•The Teatro La Quindicina summer season of Stewart Lemoine plays, originally planned for 2020, got punted by a full year to land on similar dates in 2021. It opens May 27 (through June 12) with a revival of Stewart Lemoine’s black comedy/ Hitchcock-ian thriller Evelyn Strange, surely the only offering of the season containing a scene set in a box at the Metropolitan Opera during a performance of Wagner’s Siegfried. The season includes a homegrown musical about this place, Everybody Goes To Mitzi’s (July 8 to 24)); a new Lemoine comedy for Fringe time (Aug. 12 to 28); and a revival of Lemoine’s Fever-Land (Sept. 23 to Oct. 9). All but one of the four productions are directed by women: Shannon Blanchet, Kate Ryan, and Belinda Cornish.

•FESTIVALS! (“dost thou think because thou are virtuous there shall be no more cakes and ale?”)

The Freewill Shakespeare Festival, which cancelled its entire 32nd annual edition of alternating Shakespeares last summer, is back in Hawrelak Park June 15 to July 11, with those very plays: Macbeth and Much Ado About Nothing. Garett Ross and Nadien Chu star in Macbeth, directed by Nancy McAlear. The company’s new artistic director Dave Horak directs Much Ado, with Bobbi Goddard and Mathew Hulshof as Beatrice and Benedick, and Braydon Dowler-Coltman and Christina Nguyen as Claudio and Hero.  Tickets are already on sale. The Heritage Amphitheatre, incidentally, is a 1,000-seat house: lots of room for distancing.

Nextfest, the influential multi-disciplinary showcase of emerging artists that figured out, on short notice, how to shift its massively complex self online in 2020, will happen, one way or another, June 3 to 13.  (They started inviting mainstage proposals in December.)

•Workshop West Playwrights Theatre has announced a spring premiere (date to be determined) for a new piece from the startlingly versatile actor/ playwright/ composer/ Guys in Disguise artistic director Darrin Hagen. It’s a story of falling in love with music.

•Punctuate! Theatre’s new Playwrights’ Unit brings together 15 theatre artists, of every ethnic background and experience, from across the country to create new plays while the world is imprisoned by COVID. Expect public readings from this diversity of talent in May.

The Shoe Project brings together the SkirtsAfire Festival and Workshop West Playwrights Theatre in the Edmonton chapter of a national project launched in 2011 to giving voices, through theatre, to immigrant and refugee women. Veteran Canadian playwright Conni Massing mentors women from around the globe; their storytelling prompt is a pair of shoes they have worn on journeys, often arduous, to new lives in this country. Public performances happen March 12 and 13, at (or possibly from) the Westbury Theatre.

The SkirtsAfire festivities, designed to showcase the work of female artists, includes a collaboration with Edmonton Ballet. Body of Words is a multi-disciplinary work that includes Edmonton’s poet laureate Nisha Patel and spoken word artist Medicine Mathurin. It runs March 7, 8, and 14.

A NEW THEATRE FOR A THEATRE TOWN: And as a grand finale, the new $12 million Roxy will open, late in 2021 — now, there’s a New Year’s Eve bash to anticipate! — on the footprint of Theatre Network’s 124th St. ex-cinema home, which burned to the ground in 2015. Not one but two theatre spaces, a 200-seat mainstage house and a 100-seat rehearsal hall/ studio theatre. Theatre Network will start equipping it this summer.

Running out of doses: Alberta pauses appointments for first dose of COVID-19 vaccine
Jan 18, 2021 11:51 AM
Comments