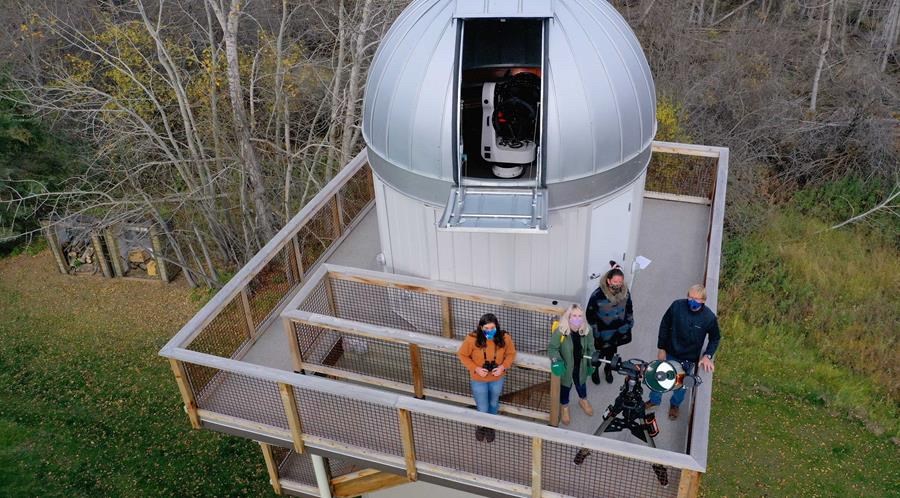 The new Hesje Observatory makes the U of A the only university with a dark sky preserve observatory in Western Canada. (Photo: Daron Donahue)

A new University of Alberta observatory opening at Miquelon Lake Provincial Park will give area stargazers a cutting-edge way to enjoy the splendour of the night skies.

The Hesje Observatory, located at the Augustana Miquelon Lake Research Station, opens with a virtual ceremony Jan. 12, and brings the wonders of after-dark skies to the public, as well as to local schools, U of A students and researchers.

The facility makes the U of A the only university with a dark sky preserve observatory in Western Canada, giving users the opportunity to get up close to the natural wonders of night skies unpolluted by artificial light.

“This is one of the only observatories that has the benefit of being in a designated dark sky preserve,” said Glynnis Hood, manager of the research station and an environmental sciences professor at Augustana Campus. “We can now have a very unhindered view of the sky, and to be able to see it in a more natural format reflects the importance of having dark sky preserves.”

From telescope to full observatory

The construction of the observatory was made possible by a $500,000 donation from U of A alumnus and retired businessman Brian Hesje.

The project began with the idea of a high-quality telescope for astrophysics classes, but eventually resulted in the building of an entire observatory, said physics professor Gerhard Lotz, who is excited about the world of exploration the facility represents.

“It gives us something to hang onto during these hard times of the pandemic—that there are things out there that are worthwhile and beautiful and exciting.”

“They’re important not only for astronomical observation, but also for ecological processes. Many animal species depend on darkness to avoid predation, to breed, to exist. In areas with light pollution, we're seeing biological changes in some species which aren’t positive for their ongoing survival. Having this observatory highlights the importance of dark skies, and highlights the need for taking sustainability and the effects of human activities seriously.”

The observatory, built onto the existing research station, is equipped with a rotating dome and two high-powered telescopes—one fixed and one portable—that offer sky-watchers richly detailed viewing, said Rae Metrunec, a research assistant at the station who is helping bring the observatory online.

“People can’t get equipment like this on their own,” said Metrunec, who recently graduated with a U of A science degree in math and physics. “The moon is spectacular; you can see every crater, all of the shadows.”

The budding astronomer is excited about the teaching potential of the new facility for students.

“We’d use a homemade telescope for astrophysics class, but the observatory offers much better equipment. The things we were learning about we wanted to see personally. When you look at a nebula or a galaxy through a good telescope it looks much more realistic than photos.”

The advanced software that controls the fixed telescope will give astronomy students the ability to do advanced analysis, Lotz added.

“They could do some very fine measurements of astronomical objects, mainly stars, but also galaxies.” The observatory gives “access to hands-on science,” he noted. “It’s a step up from doing experiments in a lab.”

There’s also interest in using the facility for scientific and Indigenous land-based research, Hood said. There’s already an all-sky camera hooked up at the research station to track meteors, with plans to bring the observatory’s main telescope online for remote viewing and livestream feeds to local school division classrooms and to post-secondary classes.

A new digitally wired classroom, an observation deck for people with their own telescopes, additional washrooms and a wheelchair ramp also open the facility to tourism, along with remote and post-pandemic in-person community programming such as special astronomical viewings, field trips, presentations, conferences and science camps for children and adults, Hood said.

“We’re thinking of all sorts of things. It’s such a gift to have this observatory, and if we can share it with as many people as possible, it lives up to the intent of the donation.”

In announcing the donation in 2019, Hesje said his support of the observatory will give students experiences to help them find and ask the right questions.

"I want to help motivate young people to realize their potential, and I'm trying to find ways to help them do that," he said.

Metrunec said she hopes the observatory will draw other young people into studying science.

“It’s a comfortable way to get people interested in STEM (science, technology, engineering and mathematics) studies and careers. I think almost everyone looks into the sky and wonders what’s out there—this will be a really exciting adventure for people.”