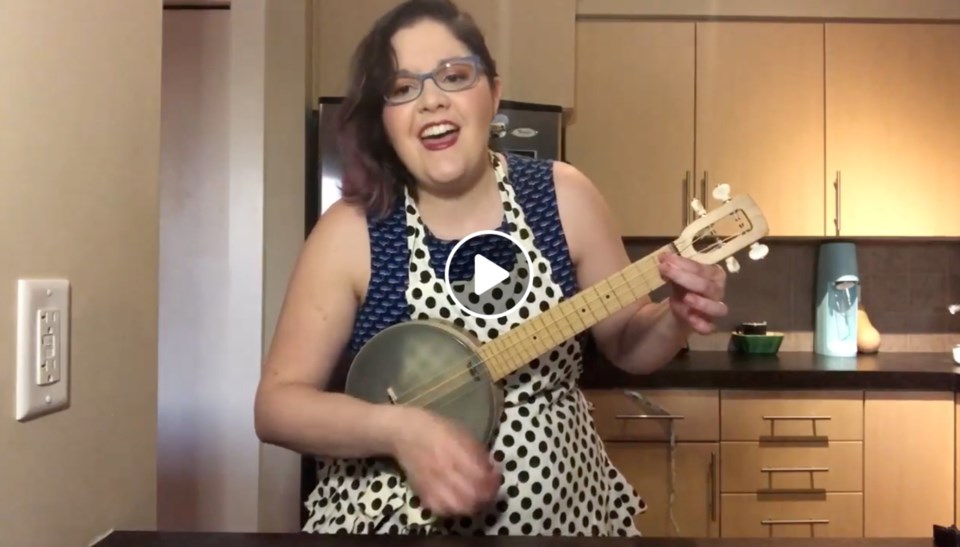 Edmonton Opera Chorus member Christina O’Dell cooks up blood orange gelato and accompanies herself on the ukulele during an episode of Kitchen Concerts. Photo: Edmonton Opera

Have you noticed there's more flour and sugar available at the grocery store? The shelves aren't quite fully-stocked, but they're not bare either.

It seems we're still cooking and baking just as much as at the start of the pandemic--and posting the results on Facebook or YouTube videos in ever-greater numbers. There's Vancouver chef Pailin Chongchitnant, whose Hot Thai Kitchen YouTube channel has more than a million subscribers. Or Renee Chan's True Nosh, now an online series of cooking classes by the Registered Dietician on healthy foods, Asian cuisine and vegetarian fare.

Experts say it's because we're entering a new phase of response to COVID-19, which ranges from a sense of limbo, to worry about the future, to wanting things to return to the way they were before. But it's also because we all have more time on our hands, spending hours at home and looking for ways to fill them.

The urge to try something new--to develop skills and work opportunities; that's part of it too, according to Mary Forhan, occupational therapist and associate professor at the University of Alberta, whose recent free online presentation took at look at why we're all baking so much today.

For Cameron MacRae, director of marketing and communications with Edmonton Opera, it's pretty simple. "Food is comforting; the recipes we share show love and care."

Edmonton Opera has springboarded off people's interest in watching cooking tutorials, cocktail-making and the like with Edmonton Opera At Home. The video series includes the kid-focused, educational DIY Opera, plus fun 'Happy Hour' sessions of cocktail recipes and chat with Canadian opera singers set to star in upcoming Edmonton Opera productions. Kitchen Concerts, which shares recipes, songs and a lot of personality from opera chorus members, is another series getting great response from foodies and the community at large, according to MacRae.

"We're trying to find ways to engage with those who aren't already part of the opera family," said MacRae. "It's a way to stay connected, and while it doesn't replace what we do on stage, it's another expression of the art form, and a great way to get to know performers individually, in a different way."

Chorus member Martin Galba, an IT specialist for Norquest College by day who just filmed a segment on making Sloppy Joes, said cooking on camera is a lot harder than it looks.

"You have to narrate everything, but make it look conversational and easy. It's not," he said. "I used to make a mean goulash, but now the only thing I make is sloppy joes--literally four steps. This was challenging, but fun to do."

Like many, Galba said commuting back and forth from a 40-hour work week at the office left little time for he and his family to think about cooking or to try new recipes.

"We were always on the go before COVID-19, with no time to experiment in the kitchen," said Galba, who has worked from a home office since the start of the pandemic shutdown. "We got a breadmaker years ago and never used it. Now we've baked bread twice. Knowing what ingredients are in your food, and the smell of bread baking--it's comforting."

Alberta to streamline approvals for new private clinics to boost surgeries
Jul 6, 2020 4:56 PM
Comments
We welcome your feedback and encourage you to share your thoughts. We ask that you be respectful of others and their points of view, refrain from personal attacks and stay on topic. To learn about our commenting policies and how we moderate, please read our Community Guidelines.