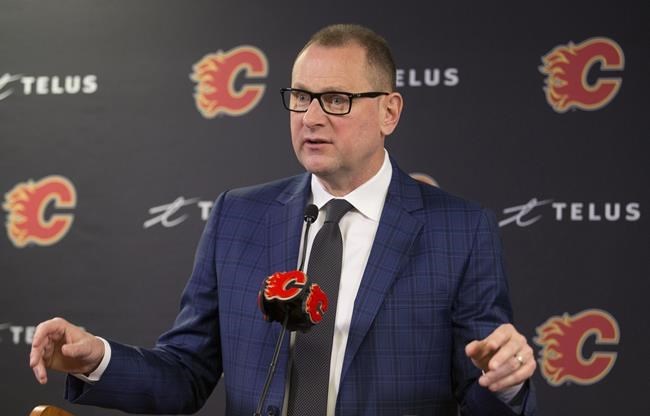 CALGARY — Proper pacing, staying disease-free and being ready to beat the Winnipeg Jets when the NHL reboots is the balancing act at Calgary Flames training camp, according to the team's general manager.

The Flames open training camp 2.0 Monday, which is four months plus a day after the NHL suspended the 2019-20 season for the COVID-19 pandemic.

"My understanding right now is that's your group, so you've got to manage your group," Flames GM Brad Treliving said Sunday in a conference call with reporters.

Knowing their first games after training camp won't be pre-season warmups, but a best-of-five elimination series against the Jets in Edmonton, Treliving says Flames coaches might have to pull on the reins the first few days of camp.

"I think they're going to come out hot," Treliving said. "You want to get your work done, but you've got to be smart about it.

"As much as the series against Winnipeg isn't that far away, from a playing standpoint, we've still got three weeks.

Calgary (36-27-7) ranked third in the Pacific Division, four points back of the second-place Edmonton Oilers, when the NHL halted play.

Winnipeg (37-32-8) was fourth in the Central and held down the first wild-card berth in the Western Conference.

Theirs is the lone all-Canadian matchup when the play-in round starts Aug. 1 in the hub cities of Edmonton and Toronto.

Each team is limited to 52 people, including 31 players, upon arrival in each hub city where they're to be walled off from the public.

Treliving says what keeps him awake at night is the Flames staying virus-free before arrival in Edmonton.

"What we've learned about this virus is it's not a dirty little secret. You don't have to be doing something wrong to attract it," he said. "It's still out there."

The Flames will enter Scotiabank Saddledome one by one wearing masks, the GM said, and be subject to daily temperature checks and COVID-19 tests.

Dressing rooms will be sanitized after use and players will physically distance from each other during dryland training, he added.

"Where you are susceptible is when you leave the rink," Treliving acknowledged. "As an organization, we've given them all the instruction they need.

"We're as on lockdown as you can possibly be right now, to try to be as safe as we can to get to the hub."

Hamonic was among half a dozen NHL players as of Sunday who had opted out of returning to play.

In a statement, he cited his infant daughter's respiratory illness earlier this year as his reason for sitting out the rest of this season.

The 29-year-old Manitoban is scheduled to become an unrestricted free agent at the conclusion of this season.

"Contractual status and all that stuff is a discussion for another day," Treliving said. "As I told him, I respect his decision.

"Every player has that right, has that ability. But like everything else, our focus is on the people that are here.

"The focus is going to be on us getting ready over the next three weeks to play August 1st."

This report by The Canadian Press was first published July 12, 2020.