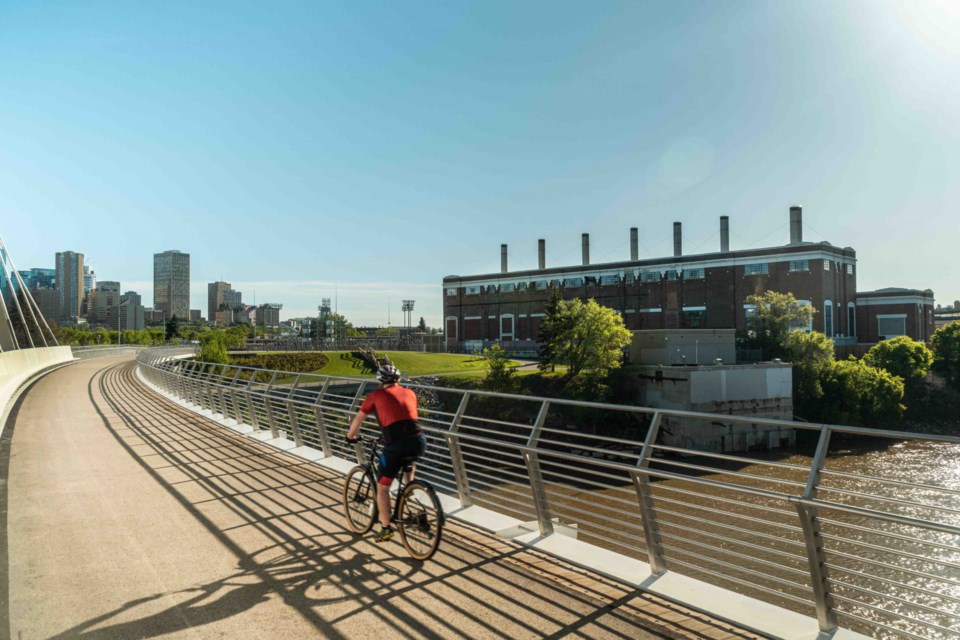 Edmonton's historic Rossdale Power Plant is finally open for public tours, and it's a project that has potential to open up a long-neglected part of the city's river valley and its Indigenous history.

"I’ve always thought, what a wonderful opportunity for a national centre on Indigenous art and culture," said city councillor for the area Scott McKeen."It could be like the Forks in Winnipeg, or Granville Island in Vancouver."

That's also the thinking for Prairie Sky, the group that took the reins on getting tourists into the near century-old electric power plant on the banks of the North Saskatchewan River in historic Rossdale. Together with operator Big E Tours and a group of companies that paid for the development and building permits to get tours going, Prairie Sky hopes to use public activity in and around the power plant as a catalyst for more in the under-utilized area, including the company's hoped-for gondola project.

Planned as a way to get around the city's core neighbourhoods, as a tourist attraction and as means to activate the river valley, the Prairie Sky Urban Gondola project awaits approval. If it proceeds, the gondola will stop at the east side of the power plant--key to West Rossdale redevelopment--and be part of a connection between downtown and Old Strathcona over a 3-kilometer gondola route.

Prairie Sky has been working with EPCOR and city council on the power plant project, mindful of the City's aim to incorporate certain principles on the site redevelopment. These include intended construction of an Indigenous interpretive park and the continued presence of Re/Max Field for at least the next decade. City council is asking that redevelopment start at the water, better linking the site with the river.

"The power plant has been a fixture in the river valley since Edmonton's story began," said Prairie Sky CEO Jeffrey Hansen-Carlson. "Edmonton has sometimes struggled with what its story is, but the Indigenous story is the city's true platform, and it starts here."

The site the plant is built on is linked to First Nations activity dating back as far as 1802, once hosting a fur trading post and burial ground. "That piece of dirt was the first location of Fort Edmonton, and it's history goes back thousands of years. Who knows what archaeologists will unearth when we continue to excavate?" said Hansen-Carlson.

In a city that hasn't traditionally cherished its older buildings, Hansen-Carlson is especially excited about this one, and thinks it's why so many Edmontonians are lining up to get a ticket for a one-hour tour of the plant. "Anyone could've got the power plant tour going, but it made sense for us to take it on, with what we're aiming to do in the Rossdale neighbourhood," he said.

“I’ve toured it recently and it is hard to fathom until you go in how big and impressive the interior of that building is. What I like about the tour is Edmontonians get a chance to go in and see that, and maybe their imaginations get excited by that, too," said McKeen, referring to potential development ideas that could bring the building back to life: condos, markets, theatres and dining are among the suggestions.

"The building is unfinished and largely gutted inside. We've created a route/path for visitors to walk through while enjoying the rarely-seen views across the river and learning the story of the building and the place, and what the power plant did and how it worked--the architecture, the turbines--all of it," said Hansen-Carlson of the 50,000 square-foot facility. "People have been here all their lives and never seen Edmonton from this angle."

Built in phases between the 1930s and 1950s, the Rossdale Power Plant was the only electrical facility in the city until the 1970s. After powering Edmonton for decades, the plant stopped generating electricity in 1989 and was designated a provincial historic resource in 2001. Even though it stood vacant for decades, the plant and its unique silhouette of seven smoke stacks has remained a notable landmark in the city centre.

"This was the right thing to do for the city, at the perfect time. With COVID-19, people are looking to explore their own regions with 'rubber-tire tourism'. The lack of parking is a social experiment: we're going to let everyone know that we'd like them to walk, rollerblade or cycle to the area," he said.

"And all profits from the tours will go to the city's historic society. It's an area we care about, and we want Edmontonians to see that we're activating West Rossdale in a meaningful way."

Tour-goers can park at nearby Re/Max Field or at the Kinsmen Sports Centre across the bridge if they choose to drive and walk. Storage will be provided for bikes, rollerblades, scooters and skateboards.

Because the building isn't up to code, children aren't allowed on the tour. While mobility isn't an issue, tour groups must strictly follow the set path as they learn about the building and area history. Personal protective equipment including hard hats and glasses will be required and provided on the tour.

Prairie Sky Power Plant Tours will run weekends (10 a.m. to 4 p.m.) until late September, and Hansen-Carlson said all COVID-19 regulations are in place, such as having small tour group numbers and requiring the use of face masks for tour leaders and participants. Tickets range from $16 to $26 (ages 15 and up) and must be booked online, in advance at edmonton.tours. Depending on demand, additional tours may be added on weekdays.