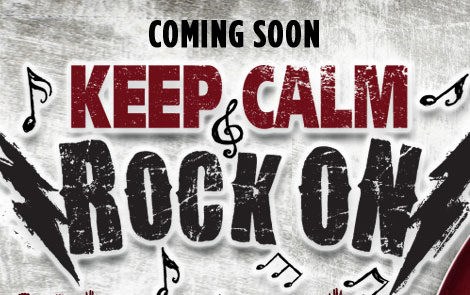 The holiday season wouldn't be the same without the Mayfield's rock'n'roll revue. This year's COVID-19-friendly edition aims to keep the music alive and spirits high. Photo: Mayfield Dinner Theatre.

"These are weird times--I think we've set a record on the use of plexiglass," laughed Van Wilmott, artistic director of the Mayfield Dinner Theatre, watching his cast and band in previews for the holiday season rock 'n roll revue Keep Calm & Rock On!. While COVID-19 safety protocols around singing and physical distancing made even putting on the beloved Christmas-time production a question mark, the Mayfield is determined the show must and will go on.

"It worked out great with our first show. Everyone stayed healthy and audiences said they felt safe--but that was simpler, with only one cast member," said Wilmott of the season-opener Playing with Fire: The Theo Fleury Story.  "This time, it's a cast of five and a five-piece band on stage. The drum, guitar, bass, sax, keyboard--they're all engulfed in plexiglass. And anytime someone sings, they go into one of three isolation-type booths. We designed the set in a way that we could have live music and live singing--no masks, no lip syncing--and AHS approved it."

It's no wonder Wilmott wants to make the biggest show of the season--normally a destination for staff Christmas parties, holiday get-togethers etc--as energized as possible. It's the nature of the rock 'n roll revues (a staple for some 20 years, written and compiled by Will Marks a.k.a. Wilmott and writing partners) to offer hits from various decades around a loose storyline (this time about a dysfunctional rock 'n roll band) as audience members hoot, clap and sing along. But with just a third of the house available (COVID-19 protocols mean the 450-seat space can now host just over 100 patrons), plexiglass barriers around booths, and rules disallowing audience interaction, singing or mingling, it's bound to be a more subdued affair.

"It's traditionally a party show, running through Christmas and New Year, and there's usually more alcohol consumed and sharing between tables. That won't happen the same way this year, but this show's music is classic rock from the 70s and 80s--Pink Floyd, Led Zeppelin, Eurythmics, Joan Jett (with a side of Lady Gaga and Pharrell Williams) so it'll still get people moving in their seats," said Wilmott.

"But maybe it's time to redefine entertainment and why we do theatre at all right now. Whether it's a play or musical, our audience surveys tell us people want the experience--to feel something or learn something. And we know the power of music. Memories are attached to songs, and music is always a great healer. It helps us celebrate the best of times and comforts us during the worst."

Wilmott said the cast and crew are so dedicated to the project (and safety of it), that they're choosing to live in the adjacent hotel during the show's 11-week run. Having their own cohort during rehearsals and weeks of performance means minimal exposure to the outside world which, especially during the typical family visits and togetherness characteristic of the holiday season, can be a sacrifice.

"Two cast members are married (Mayfield favourites Pamela Gordon and Brad Wiebe) and Murph (also a Mayfield staple, Kieran Martin Murphy) is from here, but he's choosing to stay at the hotel through the run too. These five actors have trust among each other to stay in the bubble. It's not restrictive like the NHL bubble, but we're all aware that if anyone gets COVID symptoms, we'd have to separate and isolate and then where's the show? Everyone is committed to the process."

The beloved buffet is still a way off, said Wilmott, but as the Mayfield is part of a hotel equipped to handle banquets, table food service is going well. Patrons will note added options to the dinner and brunch menus for this show, (fish and seafood, turkey, and a Vegan chili) but fear not! Audience favourites like beef and yorkshire pudding and dessert samplers (gotta have the rice pudding) remain.

Keep Calm & Rock On! is directed by Kate Ryan, with music direction by Van Wilmott. The classic Mayfield madness runs Nov. 3 to Jan. 17.

Alberta adds 700 enforcers to stop COVID-19 rule-breakers as hospitalizations climb
Nov 27, 2020 5:40 PM
Comments
We welcome your feedback and encourage you to share your thoughts. We ask that you be respectful of others and their points of view, refrain from personal attacks and stay on topic. To learn about our commenting policies and how we moderate, please read our Community Guidelines.