Two-wheels or four, protect your ride 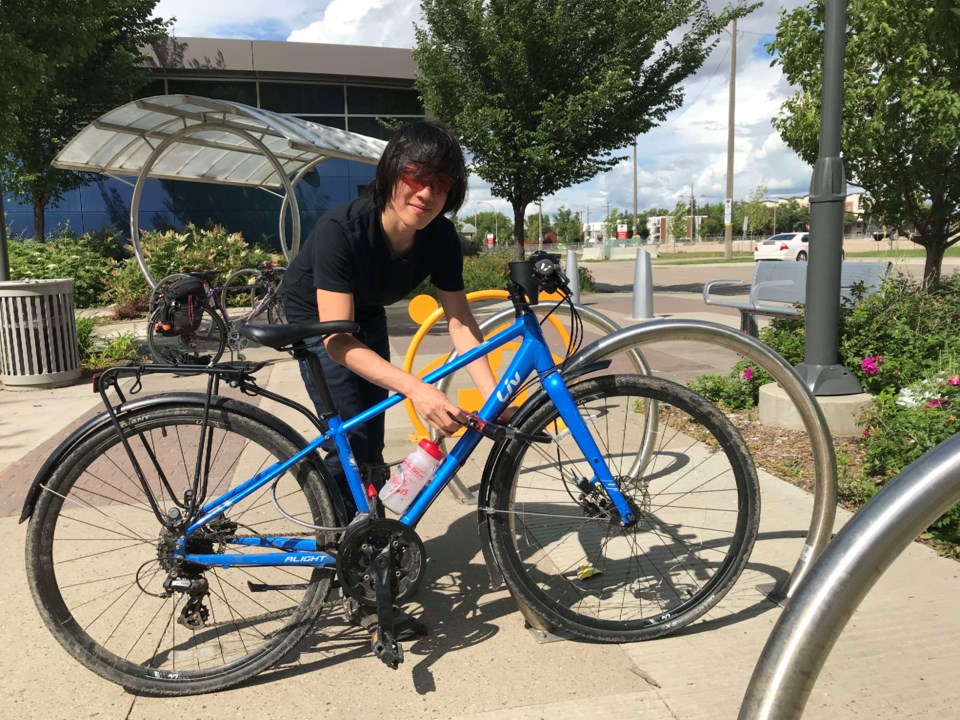 The bike movement has seen a surge in both sales and thefts since COVID-19 hit Edmonton.

And while two-wheeled ownership can be a thrill, Edmonton Police warn a clever thief can end a ride in no time flat.

"Cheap box-store locks are not worth the money. It takes seconds to cut through a weak lock," said EPS Const. Kenny McKinnon.

"Store your bike inside your house or apartment,” said the officer, adding bikes should never be left in backyards or the back of a truck. "Criminals look for bikes that are easy to grab and go."

"A basic U-lock starts at around $30-40. A secondary cable lock is helpful for securing wheels to the U-lock, but the primary lock needs to be a U-lock or equivalent, as even expensive cable locks are relatively easy to cut with small tools," he said.

Chan said Bike Edmonton routinely see high-value bikes being stolen from garages. "People with high-end bikes may not even own locks, as they aren't using the bikes to run errands around town. Relying on the security of your garage alone is insufficient."

McKinnon said thieves are getting caught more often, thanks to the Bike Index (bikeindex.org) - a non-profit bike registry founded in 2013 - which partnered with more than a dozen local bike shops last year.

"Prior to Bike Index, we returned only 50-100 bikes each year.  Since Bike Index was launched we are sitting at approximately 375 bikes recovered," he said.

Chan said Bike Index was crucial in helping him recover his bike when it was stolen in 2016. Six months after his locked $1,200 Vitas Cyclo-cross bike was taken from a friend's backyard, he received a call that the bike had been located.

"A woman found it for sale at a pawn shop, searched the bike model on Google just to find out how much it was worth, and came across my stolen bike report," said Chan, who eventually received a phone call about the stolen Vitas.  EPS retrieved the bike from the pawn shop and returned it to him. "The public aspect of Bike Index is part of what makes it such a powerful tool."

While there have been a rash of bike thefts at a handful of neighbourhoods since the COVID-19 outbreak, McKinnon said overall bike thefts in the city have held steady at about 4,200-4,500 bikes annually.

"Thieves are getting caught more often when selling bikes, and our community is more proactive when purchasing bikes," said McKinnon. "They check bikes before they buy and contact us if they come across what they believe is a stolen bike online."

He added, "If it’s stolen, the chances of you getting your bike returned exponentially increase, because not only is EPS looking for your bike, but the community is also keeping its eyes open."

Bike Edmonton has created a video called "How to Steal a Bike", which demonstrates how to properly lock a bike, as well as how easy it is to bypass cheaper locks and cable locks. See bikeedmonton.ca for links.

For those who travel using four wheels, there is similar reason for caution.

While police data for 2020 shows a 7 per cent drop in theft of/from vehicles compared to the same period in 2019, that still totals over 8,100 reported incidents.

Tips to keep your vehicle safe include; Do not leave your vehicle running with the keys in the ignition; Install a remote car starter; Do not leave a spare key hidden in the vehicle; Always lock your vehicle and ensure  the doors, windows and sun roof are shut; Always park in safe or secure parking lots; Use a steering wheel lock device and do not leave valuable items in your vehicle.

12 The average number of bikes stolen each day in Edmonton

375 Number of bikes recovered since the launch of Bike Index

5,950 Incidents of theft from vehicles reported to EPS Jan-Aug 2020

Alberta declares outbreaks at university in Edmonton, hospital in Calgary
Sep 21, 2020 11:17 AM

Shumka classes for fall
Sep 21, 2020 10:56 AM
Comments
We welcome your feedback and encourage you to share your thoughts. We ask that you be respectful of others and their points of view, refrain from personal attacks and stay on topic. To learn about our commenting policies and how we moderate, please read our Community Guidelines.