REVIEW: Mayfield Dinner Theatre steps up to the plate with powerful season opener 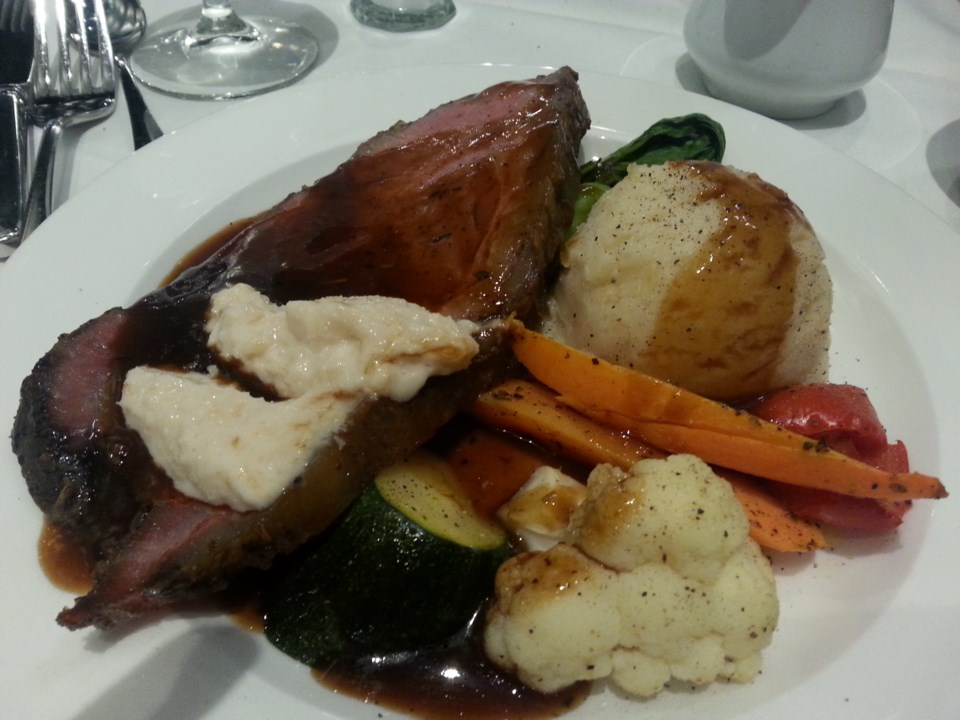 The meal won't disappoint at the newly reopened dinner theatre, but it's the show that you'll remember most. Photo: Lucy Haines

How do you come back to life after COVID-19 shut down your dinner theatre? How to stage a show with physical distancing restrictions? What can be offered to substitute for the popular but currently disallowed buffet meals?

Though no one has an easy answer to these questions, the Mayfield Dinner Theatre has done its darndest to return to a semblance of normal with an entertaining, provocative season opener and a dinner featuring all the familiar favourites.

First the show. Playing with Fire: The Theo Fleury Story is a one-man wonder, with Shaun Smyth embodying the title character in every way, from his compact stature and scrappy attitude to fancy footwork on the ice, and a mean slapshot to boot.

Smyth skates across the ice rink (yes, he's really skating on the faux-ice) and into the boards (routinely swapping out the many jerseys for teams he played for) as he tells the amazing and often traumatic story of the prairie hockey player turned NHL superstar. Fleury's tale is sometimes funny, often poignant and ultimately amazing because he survived a chaotic life that seemed doomed to fail.

A survivor of sexual abuse, alcohol and drug addiction, Fleury's is an inspirational story of triumph over tragedy. Based on the book of the same name, Playing With Fire playwright Kirstie Mclellan Day's 2012 script (that has been presented dozens of times in cities across Canada) offers up the chronology of Fleury's life--from being a poor, neglected young boy in Russell, Manitoba to facing the trauma of sexual abuse at the hand of a trusted coach, to battles with addiction, failed marriages and success/failures on the ice and ultimately, Fleury's present day work with other victims of trauma.

Director Ron Jenkins keeps the show tight, providing big screen video and photo moments to enhance the onstage narrative, from scenes of small town Manitoba to Fleury's Stanley Cup victory with the Calgary Flames and Olympic gold medal with Team Canada. And you couldn't find a better way to stage the story than on the ice. For those missing hockey in Edmonton, this is a fulfilling simulation of the real thing, with crowd noises and standing up for O Canada at the start of the show a realistic part of the action. There's even a wee zamboni clearing the ice during a five-minute refreshment break.

Kudos to Smyth, who rips through it all in a high-energy 90-minute one act show. His telling of the moments he was sexually abused are done so with honesty and care, intense in a different but as effective a way as his foul-mouthed rememberings of scraps on the ice during key NHL games. The audience gave the veteran actor a well-deserved standing ovation for the performance on opening weekend.

Now the food: if you're hankering for the Mayfield prime rib with horseradish and the rice pudding for dessert, you'll be happy to hear it's on the menu, just served at the table instead of buffet style. There are other options too--enough to fully satisfy that Mayfield craving.

Plexiglass abounds in the newly reconfigured Mayfield, which is fitting for a hockey show, but will also serve as long as needed to offer barriers but still unobstructed stage views for patrons. Check out this show, and dip your toe into the world of dining and theatre again. It feels comfortable and familiar in the space, and the show is challenging and entertaining--a great mix for a relaunch.

Labour board orders health-care staff who walked off the job to go back to work
Oct 26, 2020 11:53 PM
Comments
We welcome your feedback and encourage you to share your thoughts. We ask that you be respectful of others and their points of view, refrain from personal attacks and stay on topic. To learn about our commenting policies and how we moderate, please read our Community Guidelines.