Review: Scrooge up close and personal 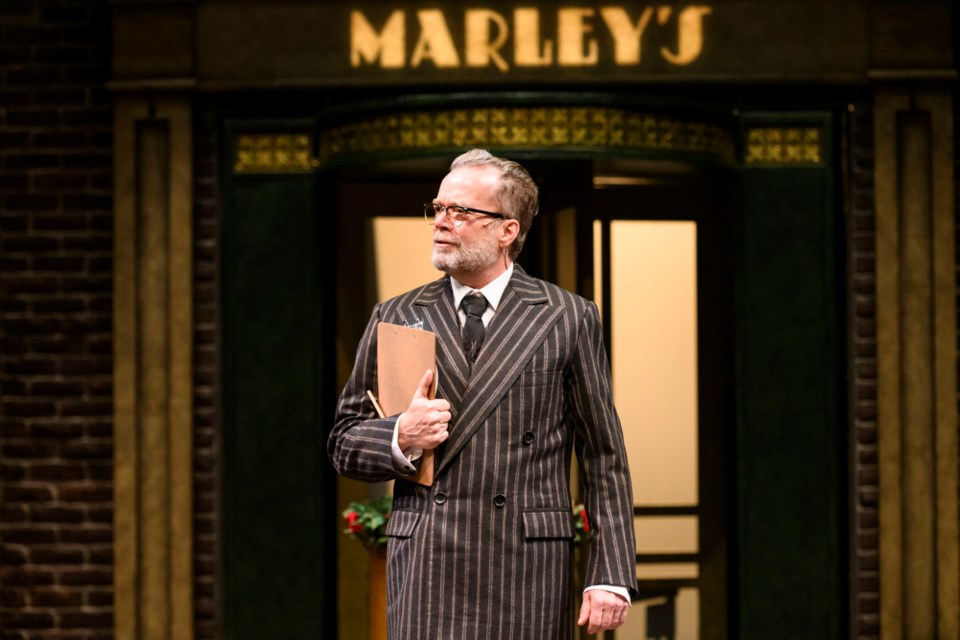 There are good things about seeing The Citadel Theatre's annual Christmas tradition, A Christmas Carol, streamed at home: getting a close-up look at Ebeneezer Scrooge's transformation from Bah Humbug curmudgeon to an old softie spreading love to those he has been hardest on, for one.

Another is simply seeing the story of Scrooge played out much like it was last year when David van Belle's adaptation first took to the Maclab stage. The 1940s-era costumes and scenery are back in this version, as is the music, used effectively in the 90-minute adaptation of the adaptation. It sets the mood at the Cratchit home with Have Yourself A Merry Little Christmas, and in festive fashion at the Fezziwig's department store Christmas party. Plus, it's warming just to see the familiar cast (most all returned from last year's show) before us again, albeit from our couch instead of a downtown theatre seat.

St. Albert native Ted Dykstra is an effective Scrooge. As owner of Marley's department store, Scrooge is at turns snarly and gruff, impatient and exasperated with his staff, his housekeeper and pretty much everyone he encounters. Film works well for Dykstra's portrayal--a Scrooge that is as expressive with his breath as eyes brimming with tears when redemption is at hand. We can hear the fear in his body and voice when encountering ghosts past, present and future. We feel the love and ache he has in childhood for his sister Fanny, and likewise see the joy he finds with his second chance at the end, dancing giddily around the stage with his housekeeper Mrs. Dilber or contrite at his nephew Fred's front door. It's a lovely performance.

I especially liked the quiet moments, between young Ben and his fiance Belle, (Braydon Dowler-Coltman and Cynthia Jimenez-Hicks), and the tender care of Mrs. Cratchit (Alison MacDonald) and her children. The interactions between Scrooge and Fred (Ben Stevens) whose love for his uncle never wavers, are especially poignant. The tenderest of moments really work on the small screen.

Still, a lively turn from the cool Ghost of Christmas Present in the form of Citadel favourite John Ullyattt is worth a gander too.

Some things work better in the stage version--for me the music with live band is a preferred way to hear standards like I'll Be Home for Christmas and It's The Most Wonderful Time of the Year, with folk bustling through the city and the revolving door of Fezziwig's department store.  And the narrator, introduced for this film version, is largely unnecessary, though veteran Edmonton actor Glen Nelson is always fun to watch.

With hope that Edmonton audiences will return to the Citadel to see this holiday favourite live again next year, the film version (directed by Citadel artistic director Daryl Cloran) is a unique and welcome treat.  And film is the way many theatre companies are staying connected to their audiences during the pandemic; at-home versions of stage productions offered to view for a limited time. In this case, you can enjoy the production anytime until Dec. 31, for a $40 streaming fee. See citadeltheatre.com for tickets.