Rolling beyond the store front on wheels 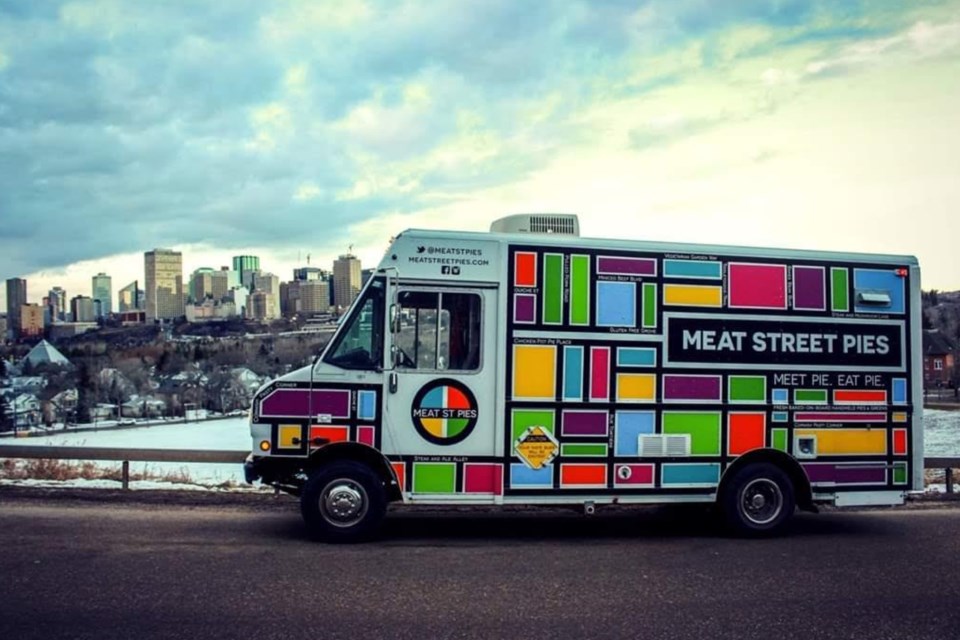 Meat Street Pies food truck anchors the flourishing business, now with product in retail shops, at farmers markets and with retail sales at a restaurant in Sherwood Park. PHOTO supplied by Thea Avis.

At a time in life when many are settled into retirement, two seventy-somethings are expanding their brainchild business of making and selling meat pies to hungry customers wherever they can find them. And it hasn’t just been at their popular store front on wheels, the Meat Street Pies food truck that has been a fixture on Edmonton streets and at festivals and special events for some six seasons now. These savvy entrepreneurs are also growing the brand--meeting customer demand for hot-and-ready or frozen, bake-at-home family size and individual hand pies--at farmers markets, in a few select wholesale and retail outlets, and at a Sherwood Park restaurant that bears the company name.

Meat Street Pies knows how to cast a wide net—maintaining a loyal customer base while finding new outlets to gain more followers. And at a time when restaurants, cafes and other food sellers are struggling to stay alive because of mandated COVID-19- related closures, Meat Street Pies may have unknowingly created a formula that can weather the unprecedented economic hit on small businesses. If customers can’t walk up to the food truck or dine in at Meat Street Pies restaurant for some time to come, they can still pick up a frozen, family-sized chicken pot pie, Jamaican patty or steak and kidney pub pie to cook at home from a city wholesaler, or grab a hot pie on the way home from work thanks to curbside delivery service at the namesake restaurant.

Changing in response to market conditions isn’t something new for chef Jonathan Avis, a British chef who brought along his cooking skills and a work history of turning companies around when he moved to Canada in the 60s. In ensuing decades, Avis and wife Thea owned a Vancouver bakery and then moved to Edmonton, where the entrepreneur took an up and down ride with food producer and exporter Saxby. When that all ended, along with much of the couple’s savings, Avis said he started thinking back to his childhood and the meat pies his mum used to make. Soon after, Meat Street Pies was born.

“We’ve been in the food business all our lives, so I guess it’s a natural fit. I’d like to not keep expanding, but my husband is a true entrepreneur,” said Thea, who works alongside Jonathan creating pie pastry and fillings in their backyard commissary—a 400 square-foot converted four-car garage equipped to create filled pies for sale on the truck, at stores and at farmers markets, and pastry for Meat Street Pies restaurant, which creates the signature fillings onsite. “We trained the restaurant staff with our recipes for the fillings, so you’ll find the same favorites there—tourtiere, steak and cheese pub pie, shepherd’s pie and more.”

Among food trucks, meat pies are an underserviced category. While the fare is nostalgic to some—sausage rolls, steak and kidney pie, cornish pasty --the unique, hearty meat pies are made from scratch at the commissary using flaky or puff pastry and then finished baking in the truck, to order. Handheld pies range from $7-$9. An Eccles cake—filled with candied orange peel, apple, currants and raisins—is only $3.

The couple is clever with marketing too, updating social media sites with where the food truck will be stationed in the warm weather months, or what varieties they’ve got at the farmers market on any given weekend. Cross-promotions with local events gives Meat Street Pies a fun presence too, an added appeal to the usually younger clientele that frequents food trucks. At the Ice on Whyte outdoor winter festival a couple years ago, the truck was on site serving up hot, stick-to-your-ribs pies for frigid festival-goers. A summer before that, the truck was stationed outside the Westbury Theatre in Old Strathcona selling meat pies before show time and during intermission for a local production of Sweeney Todd (a musical which is notorious for its questionably-produced and filled ‘meat’ pies). The couple is set to do it all again for a coming production of the musical Brigadoon, where the Scottish pie (ground lamb, onion, herbs and spices) will definitely be featured on the menu.

“We love dressing up and being silly, and meeting customers at the window,” said Thea. “And we’re still doing community events whenever we can.”

At the Meat Street Pies storefront in Sherwood Park, the chilled showcase includes the same variety of traditional, savoury pies made famous on the Avis’ food truck. Kitchen manager Stephanie Jackson says customers order online for pickup or delivery, or can stop in to browse the selection of family-sized pies.

“In these changing times, the retail side is the biggest part of our business. We work with customers on freezer orders, deliver to their home or meet them at the curb,” she said.

Province reports 18 new cases of COVID-19, hospitalization rates hold steady
May 31, 2020 5:34 PM
RCMP lift shelter advisory in Alberta after they allege officers were shot at
May 31, 2020 1:31 PM
Comments
We welcome your feedback and encourage you to share your thoughts. We ask that you be respectful of others and their points of view, refrain from personal attacks and stay on topic. To learn about our commenting policies and how we moderate, please read our Community Guidelines.