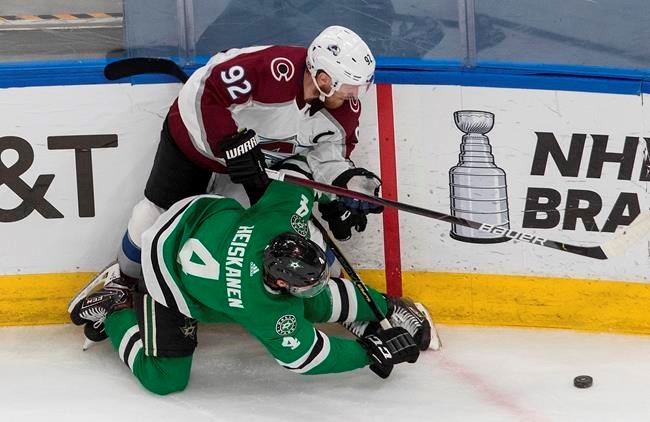 EDMONTON — High-scoring rookie Cale Makar connected on an early power-play goal, 30-year-old Pavel Francouz recorded a shutout in his debut and the Colorado Avalanche cruised to a 4-0 round-robin win over the Dallas Stars on Wednesday night.

Joonas Donskoi, Vladislav Namestnikov and Andre Burakovsky also scored as the Avalanche improved to 2-0 in the three-game round that will determine playoff seeding for the top four teams in the Western Conference.

“We’re certainly trying to give ourselves every advantage we possibly can going into the playoffs and home ice is one of them even though we’re playing in Edmonton,” coach Jared Bednar said. “I like to see our team get rewarded through all their hard work through the regular season and get the top seed and then we reset and start over for a seven-game series.”

Francouz stopped 27 shots, including a couple of point-blank whacks from Tyler Seguin on rebounds in the second period.

It was the second career shutout for Francouz. The first was Feb. 21 before the shutdown, the same day he signed a two-year contract extension.

“Actually, I wasn’t nervous today and that kind of scared me because usually I’m pretty nervous,” said Francouz, who signed as a free agent in the in 2018. “I was a little bit afraid of that. It didn’t affect my performance. I don’t even know why but I felt pretty comfortable today.”

The Stars have lost both of their games and are likely to finish where they started as the fourth seed.

“I don’t think we are where we need to be as of right now,” Andrew Cogliano said. “I think that game showed that mentally we just have to really realize that this is playoffs and this is tough and it's tough to win.”

Colorado was 1 of 18 on the power play while losing all four regular-season games to Dallas before the pandemic-forced shutdown, but three of the four goals in the restart involved the man advantage.

Donskoi scored 3 seconds after a power play ended in the first period, and Burakovsky connected early in the third period after Mattias Janmark was called for tripping late in the second.

Burakovsky's shot hit the crossbar before deflecting into the net off the back of Stars goalie Anton Khudobin, who had 36 saves. Donskoi and Burakovsky had assists on the other's goal.

Makar opened the scoring 33 seconds into Esa Lindell's interference penalty with a shot from near the blue line early in the first period.

It was the first goal in the NHL bubble for the 21-year-old Makar, who led all rookie with 12 goals and was second among all rookies with 50 points before the hiatus.

The Stars have been shut out for 115 of the 120 minutes in the restart. All three goals in a 5-3 loss to Vegas came in a span of less than five minutes.

“We know how we have to play. We can’t afford to fall behind,” coach Rick Bowness said. “The chances are there. The finish wasn’t tonight. We know how we’ve got to play to be successful going into the playoffs, and we’ll get back there.”

NOTES: D John Klingberg didn't play for Dallas. G Ben Bishop was also declared unfit to play but probably wouldn't have made the start anyway. ... Nazem Kadri, whose goal with 0.1 seconds left beat St. Louis in the round-robin opener, had an assist. ... Stars D Thomas Harley made his NHL debut at 18. Harley was the 18th overall pick last year.

Alberta's top health official says province is not in a second wave of COVID-19
Sep 24, 2020 4:49 PM
Comments
We welcome your feedback and encourage you to share your thoughts. We ask that you be respectful of others and their points of view, refrain from personal attacks and stay on topic. To learn about our commenting policies and how we moderate, please read our Community Guidelines.