Seven Tips for Cooking your Turkey this Thanksgiving 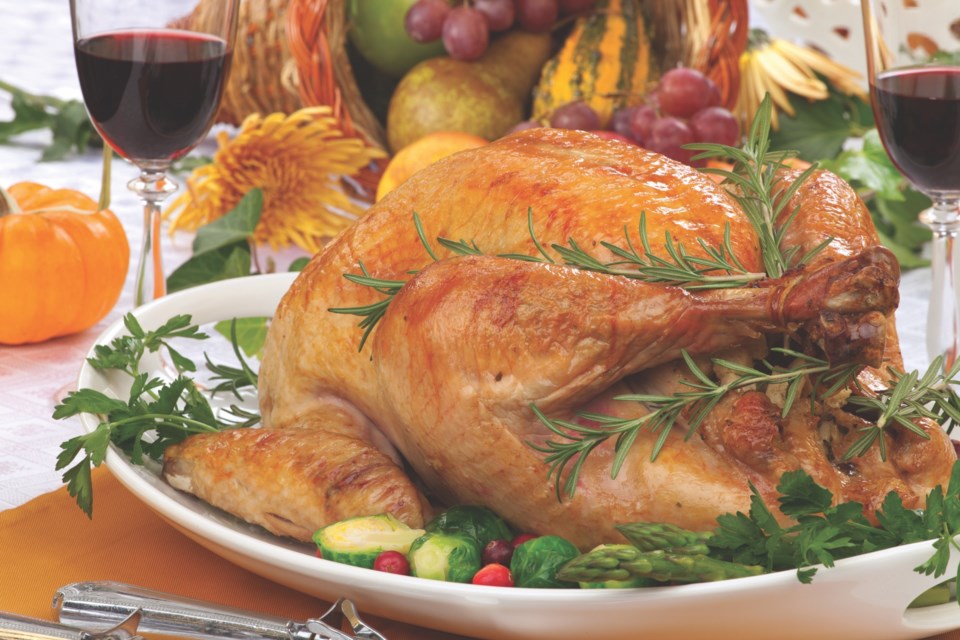 Don't be nervous about cooking a turkey this Thanksgiving. Follow our tips and it'll work out! Photo: Metro Creative Connection

Many of us have a disaster story about cooking a holiday turkey. Forgot to turn the oven on? Burned it beyond recognition? Dropped it right out of the oven? You're not alone. With tips on brining basting and more, gathered from Google, chatelaine.com and the Butterball Talk Line (1-800-BUTTERBALL), you've got this!

1) How big of a turkey? - Butterball recommend planning for from 1 to 1.5 pounds per person, (because leftovers!) so for a gathering of eight, buy a turkey of about 12 pounds. Consider roasting two smaller turkeys instead of a huge one, say experts--it'll be less dry.

2) How and when to thaw a frozen turkey? For that 12-pound turkey, start unthawing up to one week ahead of cooking date. It takes about 24 hours to thaw every four pounds of turkey in the refrigerator. Keep in a tray on bottom shelf, breast side up. It'll keep an additional four days once thawed. The quick-thaw method, covered in water (sink or cooler) thaws turkey at a rate of about 30 minutes per pound. The trick here is to change water frequently (every 30 minutes) and keep the bird cold!

3) To brine or not to brine? If you're buying any type of pre-seasoned turkey, do not brine--it'll be too salty. Otherwise, brining in a salt-water solution (1/4 cup salt to 4 litres water ratio) or with a salt-mixture rub (sugar, salt, butter) adds flavour and will keep your turkey moist! Remember to rinse off brine before cooking.

4) How about a roasting rack? Yes, lift your turkey off the bottom of the roasting pan for better air circulation and even cooking. Use a rack or, as I do, sit the turkey atop a few carrots or celery stalks (even snakes of tin foil) to raise the bird up a little.

5) Stuffing inside or on the side? I used to always do stuffing inside the bird, but my thoughts have changed. In-the-bird stuffing adds cooking time, which can dry out your meat--plus there are concerns about bacteria growth--stuffing and turkey both need to reach 170F.  Now I do a dish of stuffing alongside the bird in the last hour of oven time, adding some turkey juices while the stuffing cooks in its own casserole. Try both ways and see what you prefer.

6) Covering and basting - Your choice. I do both, covering the bird with foil for most of the cooking, and then removing foil and basting for the last hour or so to get the golden, crisp skin everyone loves. Those who don't like to baste say it'll take longer to cook the bird, with all the opening and closing of the oven door, and it doesn't add juiciness if it doesn't penetrate beneath the skin. Butterball's open-pan roasting method says to roast the turkey uncovered for the first 2/3 of time, until skin is golden brown. Then, cover breast with tent of foil for the rest of cooking time, so the white meat doesn't dry out.

7) How do you know the turkey is cooked? Experts recommend always using a meat thermometer, which should read 170F in breast and stuffing, and 180F in the thigh. Others talk about having juices run clear, or easily twisting the drumstick to indicate done-ness, but a meat thermometer is the most reliable option. Don't overcook the bird, as it will continue cooking out of the oven. Leave it to rest for as long as possible (some say for as many hours as it spent in the oven) loosely tented in the pan, where it will re-absorb many of the pan juices, helping keep your bird moist!

THIRD ACTion Film Festival celebrates age this weekend
Oct 23, 2020 3:57 PM
Comments
We welcome your feedback and encourage you to share your thoughts. We ask that you be respectful of others and their points of view, refrain from personal attacks and stay on topic. To learn about our commenting policies and how we moderate, please read our Community Guidelines.