Standardized patient program a benefit to students and would-be patients 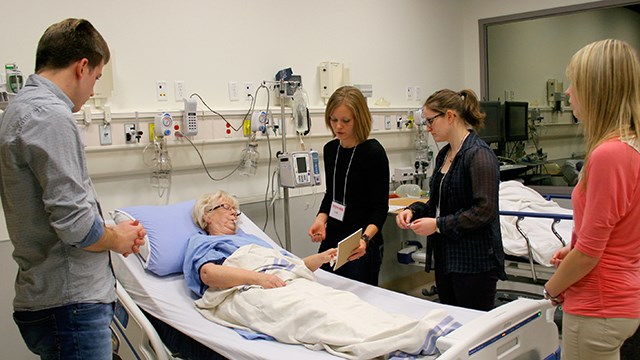 A Standardized Patient--playing the role of a patient who is intubated and cannot speak--uses a notepad to communicate with a class of inter-professional health care students. Photo supplied

Roger Levesque doesn't have diabetes, hasn't had a stroke or a heart attack, but he acts like he does.

The 60-year-old Edmonton freelance writer pretends he has illnesses, ailments and medical emergencies as a Standardized Patient (SP) for health care professionals studying at the University of Alberta, MacEwan University and the Northern Alberta Institute of Technology.

SPs are given a script to memorize, and are trained in how to physicalize a role by, for example, walking like a Parkinson's patient: how to emotionally respond to it; the psychology of the character; and all the responses a patient would have during an an actual examination. Sometimes the patient is a mannequin and the SP plays the part of a relative.

Creating a real-life situation for students

The purpose of the SP program is to create an authentic experience for students for teaching and assessment purposes, said Vlady Peychoff, the program's simulation educator.

Besides acting out symptoms, SPs help students work on their patient rapport, empathy, communication and interpersonal skills, providing them with different strategies for delivering bad news, for example.

"It's a bridge between textbook learning and practise," Peychoff said, and more real than students practising on each other, the way they did before SPs.

The SP program at the U of A has been running since 1992 and benefits those studying to be doctors, nurses, physiotherapists, pharmacists, denturists, and phlebotomists, among other health care occupations. It's also used by nursing students at MacEwan, and paramedics, Emergency Medical Technicians and veterinary assistants studying at NAIT.

The program has a data base of 300 SPs, but is always recruiting, Peychoff said. Current SPs range in age from teens to 80s and come from all walks of life. Besides actors, there are former bankers, a retired minister and entrepreneurs. SPs are paid between minimum wage and $20-$25 an hour, and the work can be steady or sporadic.

Flexible schedule and a new understanding of medical system

Levesque has played about 60 different roles since becoming an SP four years ago.

"I've had virtually every conventional disease or chronic illness, to emergency situations. Sometimes you play a role where you have multiple things wrong, so if you're playing an older person you might have diabetes, high blood pressure and an enlarged prostate all at the same time."

SPs also play non-acting "warm body roles," where they are literally a warm body to be examined by students who check their breathing, liver, gastrointestinal tract, heart, blood flow, and lungs.

"I've not only learned a great deal about health issues, but I'm much more conscious of my own physical health," Levesque said. "Suddenly I was going out and meeting more people, feeling like I was doing something positive and good for the medical system."

It's a perfect job for a playwright, who, like many theatre people, hustle for a living, because the work is flexible and pays, Vance Hehir said. "I've been a waitress, a server and a bartender, and I simply didn't want to do that anymore with a kid."

Before COVID-19, SPs were in person with students at school and at the hospital. Now they communicate virtually.

Vance Hehir recently spent hours on Zoom playing a role for an exam for third-year medical students. She did four, 10-minute rounds, each with six students and an examiner monitoring.

Though her favourite roles are played for paramedics and EMTs--even being taken around the block in an ambulance--Vance Hehir has also played homeless and in medical distress in an outdoor setting. She was so convincing, passersby called security to help her. "Somebody once dropped a bag of cookies beside me," she said.

Spending time with students has made her more comfortable dealing with health professionals too.

"Instead of bring scared when I go to the doctor I feel like I have a better grip on what's going on to advocate for myself."

The hardest part of being an SP, Vance Hehir said, is the higher-stakes exams which can be a "little nerve-wracking" because they're standardized and very rigid.

"You may have 40 different students during an exam day and you have to keep (your performance) absolutely standardized to make it fair for each person. Students pay a lot of money (thousands of dollars) for licensing exams so there's a lot at stake for them. Their career is in your hands so you can't coast."

It's "hugely important" to give students the experience of this simulation work as part of their training, Levesque said. "You realize their whole experience has been tremendously empowering and it's great to know you were able to help them."

How to become an SP

The U of A is always looking to add SPs from different age groups and backgrounds. For more information go to ualberta.ca and search Standardized Patient Program.

Public health officials urge Canadians to limit contacts again as COVID-19 cases rise
Sep 22, 2020 8:45 PM
Comments
We welcome your feedback and encourage you to share your thoughts. We ask that you be respectful of others and their points of view, refrain from personal attacks and stay on topic. To learn about our commenting policies and how we moderate, please read our Community Guidelines.