Survey: nervous Alberta diners don't have to opt out of dining out 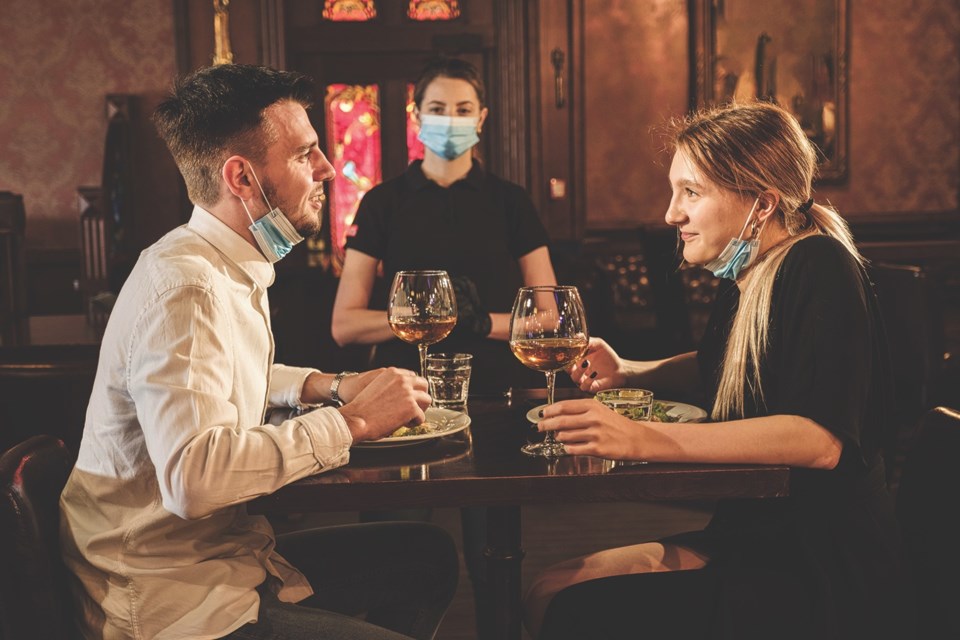 Anxious about dining out during COVID-19? There's an app for that. Photo: Metro Creative Connection

Even though phase 2 of Alberta's COVID-19 relaunch allows more opportunities for dining out, have you still avoided going? A new survey shows that just over half of Canadians are still only eating at home, so there's work to be done in making people feel safe and ready to venture to the restaurants.

Andie.work, a Canadian free AI online and mobile app focused on empowering consumers to avoid COVID-19 exposure, found in a recent survey that most Canadians have some anxiety about the dine-in scene, whether at an indoor table or at a patio seat. As a result, the app is expanding its functionality to keep Canadians safe when they eat at a restaurant, bar or patio.

In addition to past help the app has offered around finding the shortest wait times at grocery stores, liquor stores and pharmacies, Andie.work has added a five-star rating system for nervous diners to rate restaurants on key COVID-19 issues like utensils, bathrooms, staff cleanliness, food preparation, physical distancing and availability of hand sanitizers.

The Canadian company recently conducted a survey of 1000 Canadians to uncover and address their greatest concerns while dining out. Attitudes range slightly from Ontario to B.C. to Alberta, but overall, Canadians expressed similar concerns over restaurant lineups, affordability and worry over touchpoints.

Key findings of the survey show that Canadians feel significantly safer eating at independent restaurants (35.5 per cent) versus fast food or chain restaurants. They also feel safer on patios (21.7 per cent) than indoor dining rooms. Women are more concerned about lineups (56.1 per cent) and utensils (55.8 per cent) than men, it showed and, perhaps not surprisingly, men really want buffets back. A whopping 73.4 per cent of male respondents said they felt the safest eating at a buffet during COVID-19.

When asked to identify the biggest barrier to eating out right now, nearly half of those surveyed said 'potentialy catching COVID-19'. Exposure to others, lack of affordability and long lineups with other patrons were other concerns. Issues around bathrooms and exposure to wait staff were also mentioned.

Viz Saraby, a professor of interior design at George Brown College in Toronto, said that while restaurants are implementing safety measures, they may also be making themselves less appealing to diners.

"I think the fundamental reason people go to restaurants is because of the vibe," said Saraby. "You don't go into a place that's empty because you think it's probably not very good. Plus you don't want to sit there by yourself. Even when you don't know the others in the restaurant, it's the feeling of being together that people may be missing."

Through Andie.work’s ‘Dining Defender’ update, Canadians that use the app will be able to review ratings from other diners and rate their own experiences in real-time. Diners will rate the critical COVID touchpoints of utensils, bathrooms, staff cleanliness, food preparation, physical distancing, safety rules enforcement, guest PPE and availability of hand sanitizers and share those ratings in the app.

“We see this active ecosystem of diners on the app during COVID as a big step forward in protecting Canadians who choose to eat out,” said Dan Snow, CMO of Andie.work. “For the sake of restaurants and patrons alike, we’ve expanded the Andie.work app to make eating out safer for Canadians and with the ratings system, they can dine with confidence.”

With restaurant density and wait times refreshed every five seconds, the Andie.work app gives Canadians a clear view of how busy prime restaurant and patio destinations are from coast to coast, enabling them to avoid both the busiest customer times and close quarters waiting in line.

Canadians can simply input a postal code to search any popular restaurant/patio area in the country and get an AI, not crowdsourced, real-time density and line update.


This has been shared 0 times

RCMP investigating after far-right groups disrupt anti-racism rally in Alberta
Sep 22, 2020 7:45 PM
Comments
We welcome your feedback and encourage you to share your thoughts. We ask that you be respectful of others and their points of view, refrain from personal attacks and stay on topic. To learn about our commenting policies and how we moderate, please read our Community Guidelines.