The Mayfield steps boldly into the theatrical unknown 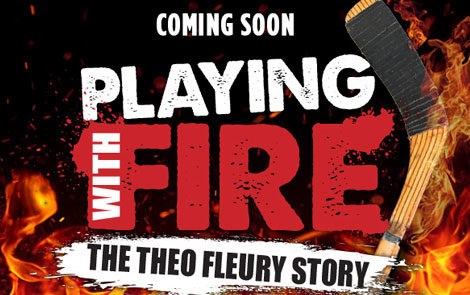 It's a brave step the Mayfield Dinner Theatre is taking: re-opening in the midst of a pandemic at a third of previous seating capacity, taking away patron's beloved buffet dinners and staging a one-man show that is as much poignant and tragic as an uplifting success story.

"We don't know if this will work until we put our toe in the water," said Mayfield artistic director Van Wilmott about all of it--the reconfigured space (down from booths and tables seating 452 to about 150 now, spaced for physical distancing and with glass barriers above booths), the meal (now a four-course plated dinner served table-side), and the season opener: a six week run of Playing with Fire: The Theo Fleury Story.

"We asked ourselves, do we start up or lay low? We're a commercial theatre and there's no way to make money with this scenario, but we want to keep our name out there, keep people interested and keep musicians and theatre staff working," Wilmott said. "The goal post keeps moving every five minutes. We thought we'd be in Stage 3 by now, singing onstage and planning the Christmas-time musical, but we're not there yet."

Wilmott, who has been at the Mayfield helm since 2007 (and continues to be music director), said there are many moving parts in keeping the audience safe (masks are required for patrons while not at their tables) plus all those working onstage and behind-the-scenes. That means much smaller casts, awareness of distancing on the 40-foot mainstage, backstage and in dressing rooms and--sadly--no singing. At least not for now.

"Playing with Fire has an amazing performance by Shaun Smyth--off the charts--and it's a touching story that has dark elements but also funny ones. It's a one-man show too, so no worries about sharing a dressing room," he said.

"It may be a bold choice for dinner theatre, to have sensitive subject matter (sexual abuse, addictions), but we've done others that weren't all laughs before--Driving Miss Daisy, Tuesdays with Morrie, even Cabaret. And the story is about hockey, and we're in the NHL bubble right now. I see it as a success story of someone who overcame many struggles and came out stronger on the other side. It's a play to make you think: something with real meat on its bones."

It wasn't Wilmott's first choice for a season-opener though. It was to be the Canadian musical-comedy 2 Pianos 4 Hands, featuring an American cast, but COVID-19 shut borders and derailed those plans.

Playing with Fire: The Theo Fleury Story is an autobiographical show set in a hockey rink, with its star on skates throughout. It tells the story of the young Canadian hockey player who was sexually abused by his coach as a youth, overcoming addictions and mental health challenges to become a legendary NHL player and advocate for Canadians recovering from trauma. Playing with Fire has toured regularly across the country since its 2012 Calgary premiere.

"There's more important things happening now than our show, like safe school re-openings and COVID spikes," Wilmott said. "But if you can get out for a night of entertainment, the show has some parallel to what the world is going through right now. None of it is our fault, and we'll come out the other side too," he said.

Wilmott knows it's impossible to please everyone, but he's aware his subscriber base tends to be older and tends to like light theatrical fare with their dinners--comedies and musicals. As it stands now, the rest of the 20/21 season is all that: Elvis, Patsy Cline and Buddy Holly on tap, plus the regular Christmas season feel-good rock 'n roll romp. Wilmott says even if there's no live singing allowed by November, the show will likely go ahead with pre-recorded vocals.

"Our audiences love the silly rock 'n roll revues so touch wood, we'll be singing live on stage soon," he said. "We're going to roll with the punches."

Dos and Don'ts in the fall garden
Sep 26, 2020 12:13 PM
Comments
We welcome your feedback and encourage you to share your thoughts. We ask that you be respectful of others and their points of view, refrain from personal attacks and stay on topic. To learn about our commenting policies and how we moderate, please read our Community Guidelines.