Walking is good for the sole (and soul) 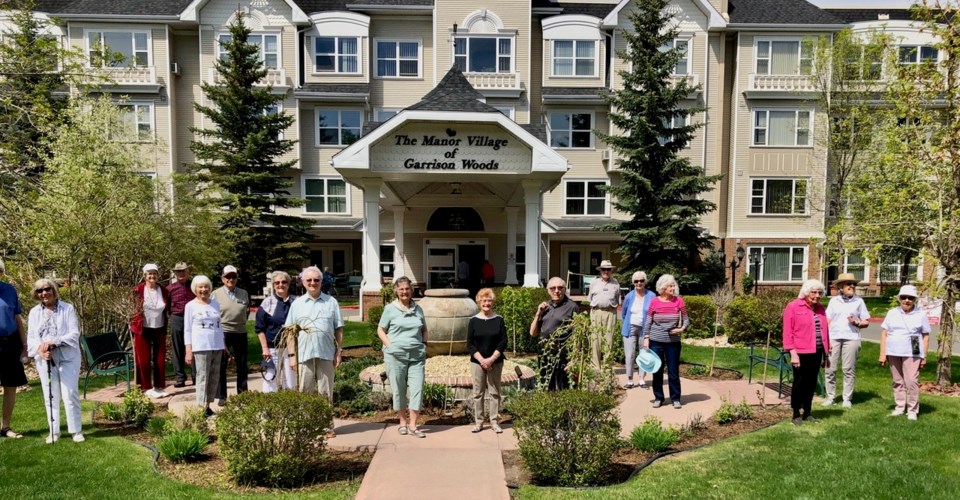 The Marda Loopers are a walking group of seniors that recently made a virtual trek across the country. Photo: supplied

Everyone knows the good walking can do-- it provides a decreased risk of hypertension, diabetes, high cholesterol and heart disease--and it offers fresh air and some vitamin D therapy when the sun is out.

But the simple act of walking can be more. Just ask 83 year-old Marion Rogers.

When the active senior was locked down by COVID-19, the resident of Calgary's Manor Village of Garrison Woods eventually coaxed staff into allowing her to walk around the building perimeter for some recreation. Soon, a trickle of people joined in, walking whenever they could, even in the April rain (and snow).

"We felt like gerbils walking around and around the same building--we soon needed new routes," she said. "When we started to count our steps, (800 steps for once around the building--twice equalled a kilometre) the interest just exploded. My 98 year-old neighbour Lynne became our 'sensational' statistician, and Ed and Gord, the 'old computer guy' and 'awesome' analyst volunteered to collect the records of our steps and track our efforts.

Donned in t-shirts bearing the group name, the Marda Loopers (named for their Calgary neighbourhood), encouraged residents to count steps when taking a morning walk, after-dinner summer stroll or even while moving up and down their hall corridors. With Fitbits and pedometers, solo or in groups, over 50 Marda Loopers started to accumulate steps faster than they could have imagined.

"We were shocked at the distance we covered when we added up our weekly tallies. We wanted a new goal so I said, let's walk to the border," Rogers (the leading looper lady) said. "We got to the B.C. border in no time, so next it was south to Montana,then to the Saskatchewan border and finally the Northwest Territories. I got maps sent from the AMA, and we took over a corner of the complex for our 'executive office' to hang the maps and mark our progress."

Rogers said all residents got involved, looking at where the group's steps took them on the map of Canada. "Someone would point to a spot on our route and say, "oh, that's where my grandparents homesteaded in Saskatchewan. The project unified everyone in the building."

After taking enough steps to virtually dip their toes in the Pacific Ocean, the group unsurprisingly turned around and kept right on walking: target Newfoundland.

"We took in parts of Canada we thought would be an important part of the journey. We worked on our French in Montreal, walked along the south shore of the St. Lawrence and arrived in Ottawa on Canada Day."

Word of the group's efforts reached the area's Calgary MP, who showed up at the residence on Canada Day with banners and a welcoming speech. "He made a fuss--it was really something," she said.

When the group's steps numbered enough to hit Canada's east coast, a genuine kitchen party was in order, Rogers said. Music, a taste of Screech, a virtual kissing-of-the-cod and even a traditional Ugly Stick were part of the festivities, and a kid's swimming pool filled with plastic lobsters capped it all off--a fitting place for walkers to dip another toe, this time in the Atlantic.

"I can't measure what this has done for our spirits--it's been good physically, but huge mentally and emotionally," Rogers said.

"It gave everyone something to be part of," she said of the 150-resident independent living and assisted living facility. "Now other seniors homes out east have heard of what we've done and are doing the same. It's a warm and fuzzy story."

Discovering a community on foot

Ask Sherwood Park's Terry Fikowski, 73, why he started walking when COVID-19 hit, and he'll say it's because his gym closed. Every day since mid-March, the retiree has walked the streets of his city, aiming for 20,000 steps (about 18 kilometres a day) first on familiar paths and main routes, and then beyond.

"My wife Diane suggested I map out where I walked, and it changed things for me," said Fikowski, who hasn't missed a single walking day in over five months. Always starting and ending the walk from his home, Fikowski said he's had many blisters and gone through a few pairs of runners along the way. "I"ve been down every street in the city--every back alley, cul de sac, commercial and industrial area from the Henday to Highway 21.

"I've lost 25 pounds without changing my diet, so that's a nice side benefit," he said, pointing to his goal of 4 million steps (3,700 kms) in 200 days, which will happen by early October. "I like to hear the birds and what's going on around me when I walk. Some people honk or wave. My granddaughter has walked with me, and a neighbour joins me on Sundays. I don't get that at the gym."

Fikowski said even the Strathcona County Museum and Archives has asked for his maps and running shoes.

"The gym I go to is open again, but I don't think I'll ever stop walking. Now I'm posting photos on Facebook--unusual things I come across while I walk, like the painted rocks in Heritage Lakes--things that other people in the city may not know about."

"The neat thing is, the only reason I started walking was that I'd rather do that than sit at home. I thought I knew my community, but I discovered a lot more by venturing a little further."

New CPR board created in Edmonton to help with COVID-19 resuscitation
Sep 21, 2020 4:22 PM
Comments
We welcome your feedback and encourage you to share your thoughts. We ask that you be respectful of others and their points of view, refrain from personal attacks and stay on topic. To learn about our commenting policies and how we moderate, please read our Community Guidelines.