What are the odds? A mind-boggling season on the links 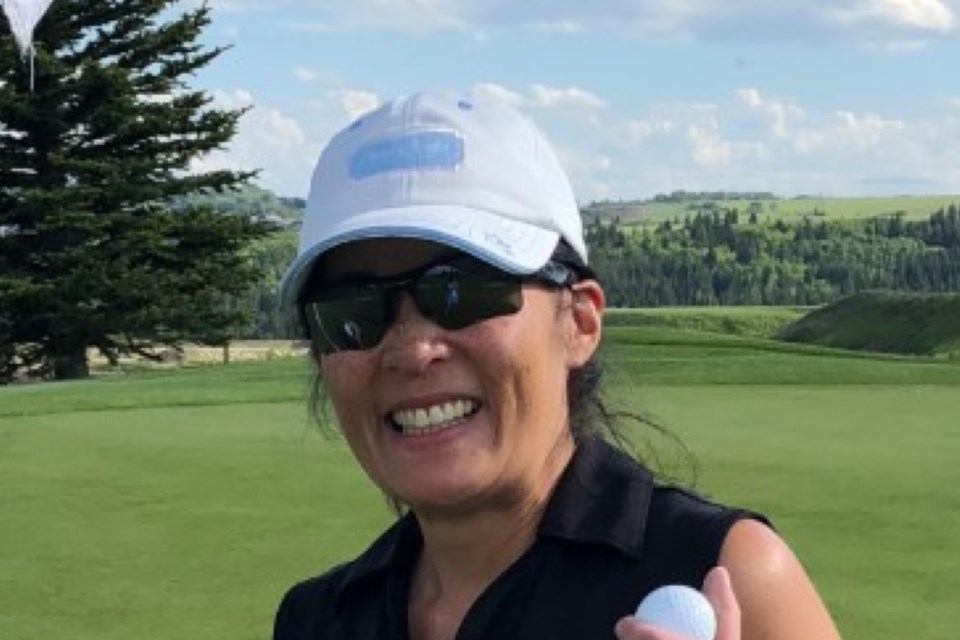 Most golfers never get a hole-in-one, but Calgary recreational player Kim Young has three this year alone--four in total--for an amazing claim-to-fame. Photo: supplied.

You could call it a stroke of luck but when you accomplish what Calgary golfer Kim Young has done that would be a gross understatement.

Young made three holes-in-one in the last three months alone. One in May. One in June. And another in July.

She also had one last year.

The odds on a hole-in-one by an average golfer are 12,000 to 1. The odds on three aces in three consecutive months? Astronomical.

“We have members who play 100 times a year and have been doing so for 20 years and yet to have (a hole-in-one),” Lynx Ridge Director of Golf Matt Kirlan told CTV Calgary. ”So what Kim has done is a one-of-a-kind accomplishment, really.”

“It’s surreal; it really is,” said Young, who admits that there’s a lot of luck involved.

“I’m just an average golfer. I’m no superstar by any means.

“The minute you think you’ve got this game down the golf gods smack you down.”

But her achievements have resulted in some fame.

“I got recognized in Kananaskis. A woman came up to me and said ‘You’re the lady that was on TV last night,” said Young, who played to a handicap that ranged from 22-24 last year but is down to 20 this year.

“My iron play has really improved but my putting has been holding me up. I shot an 86 the other day which is good for me. I usually shoot in the low 90s. But I three-putted four times.”

But Young has shown that sometimes she can keep the putter in the bag.

“I’ve been playing golf seriously for 20 years. I came close to getting a hole-in-one - most of us have come close - but last year was the first time I had one that actually went in.”

That one came at Calgary’s Lynx Ridge where all of her holes-in-one have come when she used a 9-iron from 90 yards on hole No. 5.

“That was the first one.”

But certainly not the last one.

On May 23 of this year she did it again. On the same hole no less and with the same club.

“I hit a similar shot but this time I didn’t have to go over the sand. My eye sight is not great and my friends started yelling.

“My first two holes-in-one and I never saw either of them go in.”

Then Young did it again. And again.

On June 5 on the 14th hole with another pin tucked behind a bunker, Young used an 8-iron from 85 yards.

“Again I thought it was going in the sand but it hit on top of the hill and rolled in.”

“Two shots I hit after I made my last hole-in-one landed right in front, rolled up to the cup and stopped right beside the pin.”

And, if that isn’t enough Young holed out earlier this year from 120 yards with a 7-iron for an eagle two.

“Then I got the three aces.”

As well as playing with her friends, Young also likes to golf with her husband, David Rose, who recently shot a 76 - the best round of his life.

“Everyone has been cheering me on to get a hole-in-one in August and make it four straight months of aces.

“A friend of ours has a four handicap. He’s been playing golf for 50 years and never had one.

“Holes-in-one are something special for sure,” said Young.

“All four of mine have been exciting.”

Parliament Hill security increased after reports of harassment
Sep 27, 2020 1:30 PM
Plucky Stars, leading Lightning confident going into Game 6
Sep 27, 2020 12:52 PM
Comments
We welcome your feedback and encourage you to share your thoughts. We ask that you be respectful of others and their points of view, refrain from personal attacks and stay on topic. To learn about our commenting policies and how we moderate, please read our Community Guidelines.