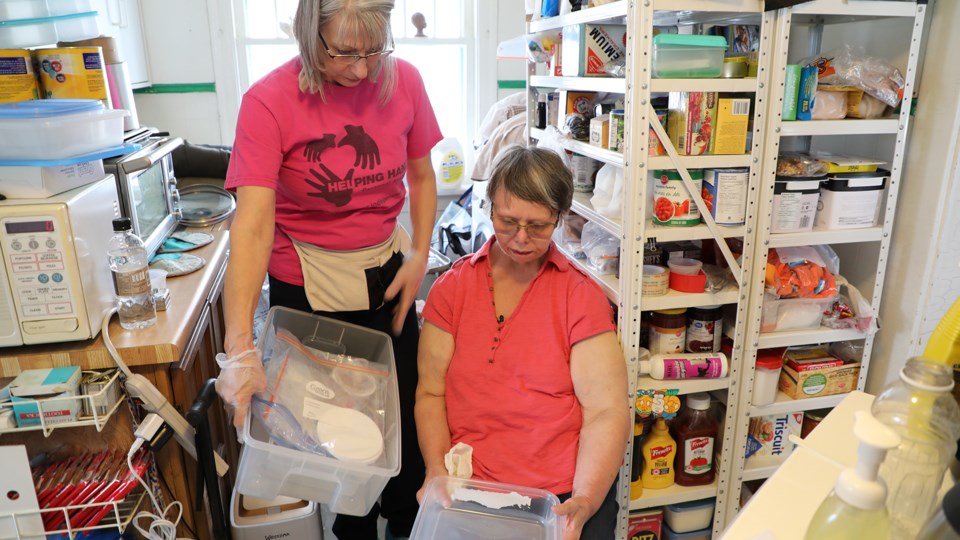 Peggy Zubyk is a retired interior designer, now living alone in Edmonton in a 650-square-foot 1940s-era house. She likes doing jigsaw puzzles online, Zooming with friends and watching crime investigations on t.v. Roast beef and turkey dinners and Greek salad are among her favourite foods. She has mobility issues and needs a walker to get around.

And she has a hoarding problem.

"There is such a stigma attached to hoarding," she said. "It implies this is what the person is, but these are interesting people, as individual as you or I. They're a whole person who has this problem called hoarding."

Zubyk, however, does refer to herself as a hoarder, "but I'm not a high-level hoarder like my sister was." Watching shows about hoarding and helping to clean out her sister's home after her death in June, Zubyk said, "I never want to get to that point."

Hoarding affects 1 out of 20

The 68-year-old is among the five per cent of the population that grapple with hoarding, an anxiety disorder where people become attached to things that have a meaning, purpose, or memory for them they can't even think about parting with.

Sometimes there's a genetic component, with tendencies that start in childhood and become problematic in adulthood, Bailey said, noting that hoarding disorder was added to the Diagnostic and Statistical Manual of Mental Disorders in 2013.

Bailey said people often associate hoarding with shows like Hoarders or Hoarding: Buried Alive, where people can't walk through their homes because they're piled so high with stuff, or they can only get around on narrow 'goat paths'. Sometimes rodents are seen running around.

"These shows can be stigmatizing. They show the most extreme cases and I have an issue with suffering as entertainment," she said, noting that on the Clutter Image Rating Scale (CIR) of one to nine, these examples are the worst, at nine. The CIR is used to screen for hoarding disorder, with people showing pictures of their kitchen and other living spaces.

Tracey Fraser, owner of Helping Hands Personal Assistants, has been working with Zubyk to declutter. She said the home was a three or four on the CIR scale when they started, meaning it had become an unsafe and dysfunctional environment. Zubyk's basement was her storage space, but clutter became a real issue after she could no longer move items downstairs and started to pile things up on the main floor living space.

"I began accumulating stuff after moving to Edmonton 40 years ago. For me, shopping was not an enjoyable thing," Zubyk said. "When I needed clothes for work and found a style of pants that fit, I'd buy it in every colour. But I liked buying things in sets, like highlighter pens in different colours. That was my Achilles' heel. I'm better about that now, mainly because I don't shop very much because of my mobility."

Zubyk deals with Kyphosis, a spinal disorder that forces her head to look downward. Though that was surgically corrected in 2019, Zubyk also suffers from clinical depression and Sjogren's Syndrome, an autoimmune disease that weakens ligaments and causes chronic fatigue.

"Depression gets to me and I shut down. At that point, I don't even see the clutter," Zubyk said. When the stuff started to prevent her from moving freely about the house with her walker, Zubyk said she knew she needed to do something about it.

After contacting Sage Seniors Association (mysage.ca), which has a support group for hoarders, Zubyk was put in touch with Fraser. The pair has been working together on and off for five years.

"As you age you may lose your mobility and cognitive ability, and you need more help," said Fraser, whose clients are mostly seniors. "That's usually when the family gets involved--if there's a fall or health reason or landlord reason, it's brought to their attention that there is hoarding or clutter in the home."

"My job isn't to make someone's house a show home. It's about making it a safe, functional space for them to live and still be happy in," Fraser said. "At the end of the day they still have to live in their home with everything that goes along with their mental health issues, so we try not to rock the boat as much as possible."

Fraser called Zubyk courageous for sharing her story in the recent documentary Attachments of Life, streaming on CBC GEM.

"I put myself out there and let cameras into my home, which was tough to do," Zubyk said. "But I decided if anybody could get anything positive out of what happened to me it would be worth it to take part."

"What works for me now is putting like with like, and then sorting it into keep, garbage or donate," she added. "I still have clutter, but I've gotten rid of a lot of stuff. I feel safe and can function in my house. But, I'm still a work in progress."