More than two million Canadians have received AstraZeneca and 17 have been confirmed to have VITT. Three women have died.
May 12, 2021 3:45 PM By: Canadian Press 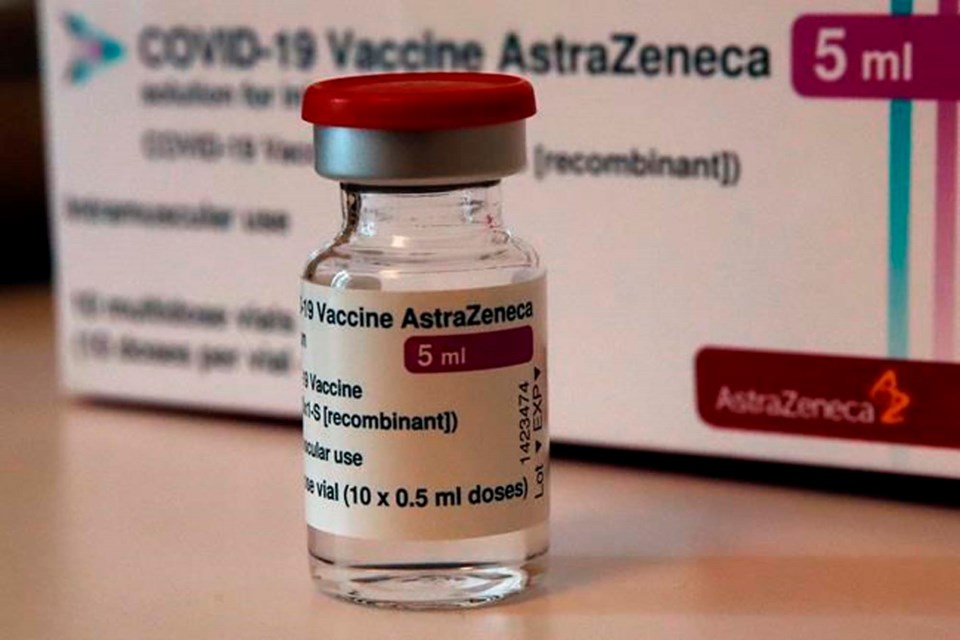 In this Monday, March 15, 2021 file photo a vial of AstraZeneca vaccine is pictured in a pharmacy in Boulogne Billancourt, outside Paris. Questions remained Wednesday about the future of the Oxford-AstraZeneca vaccine in Canada, as Manitoba limited use of the shot and Ontario announced it planned to save an incoming shipment to use as second doses.THE CANADIAN PRESS/AP/Christophe Ena

Questions remained Wednesday about the future of the Oxford-AstraZeneca vaccine in Canada as the federal government prepared to receive hundreds of thousands of doses while provinces limited use of the shot.

Nova Scotia and Manitoba both announced new restrictions on the use of the AstraZeneca vaccine on Wednesday, following similar news out of Alberta, Saskatchewan, Ontario and Quebec a day earlier.

Most provinces said they're pausing the use of AstraZeneca for most – if not all – first doses due to a lack of supply, and it wasn't immediately clear how the 655,000 doses Ottawa expects to distribute next week will affect those plans.

But Manitoba, Ontario and Nova Scotia have pointed to a connection between the AstraZeneca vaccine and a rare blood-clotting condition as part of the reason for their pause.

Prime Minister Justin Trudeau, for his part, said he intends to get a second jab of AstraZeneca.

"I talked to my doctor just last week and he recommended that I indeed get a second dose of AstraZeneca in the coming weeks or months when it becomes available," he said in question period on Wednesday.

Trudeau urged others to consult with their doctors, too.

Manitoba, for one, has said it will continue administering first doses of AstraZeneca to those who are unlikely to get other shots, but will otherwise reserve its supply for second doses.

It's due to receive 20,000 doses of AstraZeneca in the next shipment.

Ontario, meanwhile, is deciding when and whether to offer second doses of AstraZeneca to those who got a first shot of that vaccine.

The province is due to receive a quarter-million doses of the AstraZeneca vaccine next week, in addition to about 50,000 doses it has sitting in refrigerators with an expiry date just weeks away.

"We don't expect that there will be any, or perhaps just a few doses, that may expire," Health Minister Christine Elliott said. "However, this is out of an abundance of caution, because the safety and well-being of the people of Ontario has to be our top priority."

British Columbia, too, has said it intends to use most of its few remaining AstraZeneca doses to give people their second jabs.

The uncertainty over AstraZeneca has rankled some who already received their first dose of that vaccine and are undeterred by the risk of vaccine-induced thrombotic thrombocytopenia, also known as VITT.

A group of scientists advising the Ontario government has pegged the rate in Canada at one in 55,000 doses of AstraZeneca vaccine as of May 8, though it noted that some presumptive cases were still being investigated.

More than two million Canadians have received AstraZeneca and 17 have been confirmed to have VITT. Three women have died.

Alison Meek, who received her first dose of AstraZeneca last week, said she'd take a second shot of the same vaccine "in a heartbeat."

"I would have taken any of the ones that was offered. I think it is important not just for our own health, but to protect those around us. I think it's needed to get out of this – these lockdowns that we're in," said Meek, who lives in London, Ont., and teaches history at Western University.

She said she had muscle aches and a fever after the shot but is happy with her decision.

"I have no regrets whatsoever, and would happily take the second dose," Meek said.

Toronto writer Emily Saso, 40, also stands by her decision to get the AstraZeneca shot in late April to guard against the risk of her husband bringing the COVID-19 virus back home from work.

But Saso said the shifting messages surrounding the AstraZeneca vaccine have done little to quell her long-standing fear of blood clots.

"It was definitely a failure of communication," she said. "And that added to my anxiety, which was already high."

Experts have noted that the risk of clotting is much higher among people diagnosed with COVID-19 than those who received the AstraZeneca shot.

Health Canada's chief medical adviser has said that from an authorization perspective, AstraZeneca's benefits against COVID-19 still outweigh the rare risk of VIIT.

As questions over the use of AstraZeneca continue to swirl, however, health officials in all provinces are now watching for the results of a British study on mixing and matching vaccines.

Data could come on AstraZeneca and Pfizer as early as this week, with many health experts expecting very positive results from combining two different vaccines.

Yukon, which has only one active case of COVID-19 and did not report any more on Wednesday, announced it will vaccinate all kids aged 12 and up with the Pfizer shot.

It's aiming to administer first doses by the end of the school year, and fully vaccinate the youths by mid-July.

This report by The Canadian Press was first published May 12, 2021.