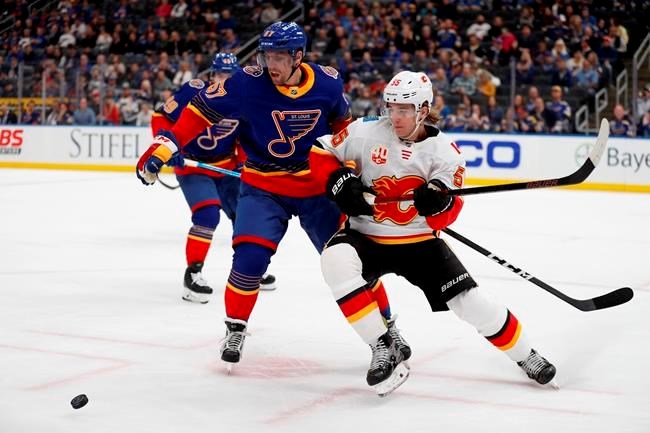 Calgary's defensive depth has been put to the test while the Flames scratch and claw to maintain playoff position.

Since the NHL all-star break, it seems when one big-minute man draws back into the lineup after an injury, another goes down.

Add in the acquisition of a pair of defencemen at the Feb. 24 trade deadline and the Flames have had a blue line in flux.

Noah Hanifin is the latest to deal with a malady. He left Sunday's 5-3 loss to the Vegas Golden Knights in the first period and did not return with an undisclosed upper body.

After 19 games sidelined with a lower-body injury, Travis Hamonic participated in a full practice Tuesday. He was injured just four days after captain and Norris Trophy winner Mark Giordano damaged his right hamstring.

Out 10 games, Giordano returned to action Feb. 25 a day after the Flames traded for reinforcements Derek Forbort and Erik Gustaffson.

Calgary has gone 9-6-1 since Giordano was injured Feb. 4

"Defencemen are always at a premium in our league," Calgary head coach Geoff Ward said Tuesday. "A couple years ago, it used to be right-shot defencemen and now it's defencemen.

"You need some depth in the organization at that position and we're seeing why right now for us.

"We feel we've got an awful lot of good depth at that position."

Hamonic might play Thursday against the New York Islanders, but Ward wasn't sure if Hanifin would.

"I don't think he's going to be long term, but we're taking that a day at a time," the coach said.

Calgary (36-27-7) was third in the Pacific Division three points up on the Vancouver Canucks, who were at home to the Isles on Tuesday night and had two games in hand on the Flames.

Calgary was six points back of the division-topping Knights and three behind the Edmonton Oilers.

Even with Vancouver's No. 1 goaltender Jacob Markstrom injured and the Arizona Coyotes more distant in Calgary's rearview mirror, the Flames still felt the precariousness of their playoff position.

A Canucks surge would drop the Flames into a logjam of teams jockeying for the two wild-card berths in the Western Conference.

"I'd be lying to you if I said you weren't watching scoreboards, you weren't looking to see what teams are doing around the league and things like that," Hamonic said.

Hamonic was paired with T.J. Brodie and Giordano with Rasmus Andersson in Hanifin's absence Tuesday.

Forbot and Gustaffson continued as a duo. Michael Stone skated alongside Oliver Kylington.

"Forbes and Gusts have come in and fit in really, really well and have played really well since they've been here so there hasn't been really any adjustment," Giordano said.

"For me, I've said the biggest difference if I play with Brodes, he's left handed and Razzie's a right-handed defenceman. That's the big adjustment as a defenceman where you put the puck really for your partner."

Hamonic says the competition for minutes when all defencemen are healthy makes the Flames a better team.

Ward's silver lining to the spate of injuries is the chance to exercise depth on defence in preparation for the post-season.

"We take the stance that it's an opportunity," the coach said. "We've seen a lot of defencemen in our lineup with over 20 minutes a night with a lot of different roles.

"The most important lineup is the one that's on the ice. We're fortunate we have a lot of able-bodied defencemen that are good NHL players.

"That gives us the opportunity to take some of these hits with our high-minute defencemen and we're able to fill the holes pretty effectively."

This story by The Canadian Press was first published March 10, 2020.

Golf Canada CEO Applebaum asks golfers to stay home during COVID-19 pandemic
Mar 22, 2020 10:49 AM
Comments
We welcome your feedback and encourage you to share your thoughts on this story. We ask that you be respectful of others and their points of view, refrain from personal attacks and stay on topic. To learn about our commenting policies and how we moderate, please read our Community Guidelines.