There's a growing confidence inside Canmore-native Connor Howe for the 2020 Winter Olympics.
Feb 4, 2021 11:45 AM By: Jordan Small 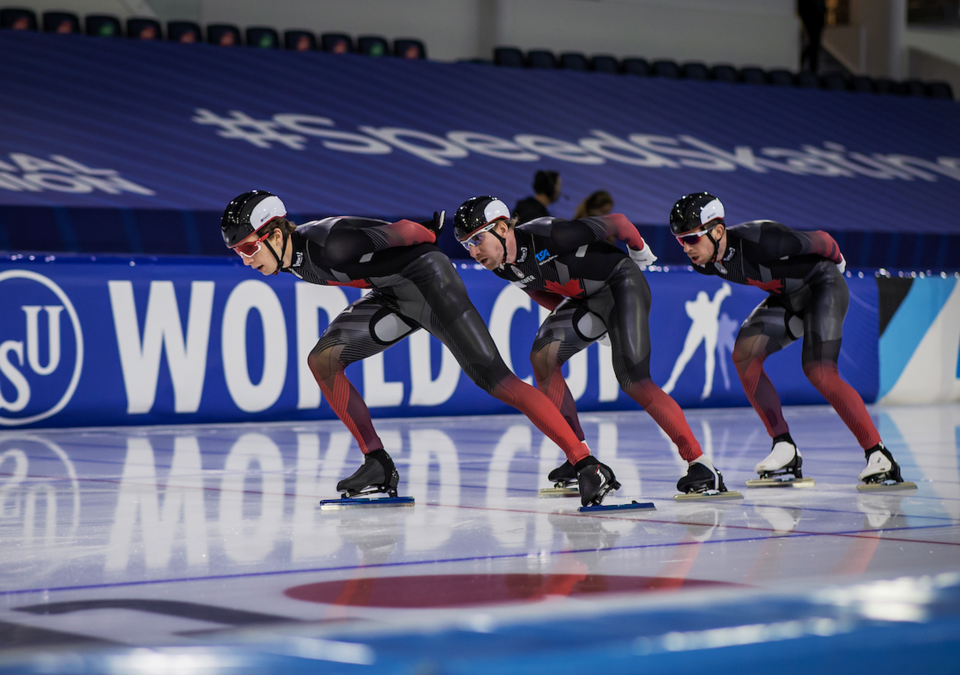 Connor Howe, front, leads the Canadians in the team pursuit on Jan. 29 at the world cup in Heerenveen, the Netherlands. GETTY IMAGES

THE NETHERLANDS – With little ice time together, speed skater Connor Howe got a huge surprise winning a world cup medal in team pursuit. But when he and his teammates did it again a week later, the Canmore-native's ambitions started turning toward a bigger event.

Wrapping up two successful world cup weekends on Sunday (Jan. 31) in Heerenveen, the Netherlands, the sparkle of Howe's newly minted silver and bronze hardware is only being outshone by an upbeat mindset that is giving the 20-year-old “a lot of confidence” ahead of the 2022 Beijing Winter Olympics.

“The pursuit is probably one of our biggest chances for an Olympic medal, at this point,” said Howe, a long track specialist.

"It’s amazing to me how quickly we’ve all clicked together," said Belchos in a press release.  "While we train together, we don’t train specifically for the team pursuit all the time. I think today we executed pretty well. I’m really impressed with Connor for coming in these past two weeks and doing just a perfect job.”

Winning bronze, said Howe, was a bit of a shocker for him due to the lack of ice time training the past 10 months due to the pandemic. But to make things a little bit more impressive, these team races were the first at a world cup for the former Banff/Canmore speed skating product.

“I think it was a kind of a good surprise for them [my teammates] to give them some speed and hold on at the end,” said Howe. “We got in some training at Fort St. John [in November] and I felt more comfortable at that intensity than I have in the past.”

For individual speed skating events inside the world cup bubble, Howe specializes in the 1,500-metre and 1,000m, and showed improvement the second weekend, finishing seventh and 11th on Jan. 30-31, respectively.

Ranked 10th in world cup points in the 1,500m this season, Howe's hopes are high for team pursuit in Beijing, but the 20-year-old is kicking at the door of individual glory.

“In the bubble, it’s been good preparation for the Olympics because there’s more security and going straight between accommodation, and knowing what I have to do to get to my peak performance, like prep-wise.”

As the world cups come to a close, Howe and the Canadian team are now resting and preparing for the ISU World Speed Skating Championships on Feb. 11, where the men's and women's team pursuits are positioned strongly for additional medals.

On the women's side at the world cup, Canadians Ivanie Blondin, Isabelle Weidemann and Valérie Maltais have been dominant, winning gold twice in the team pursuit and setting a new track record in Heerenveen.

"We were really nervous before the race, but I think we really focused on the tactical and technical aspects," said Maltais in a press release. "We executed them well, even better than expected, and we proved to ourselves that we could go even faster."