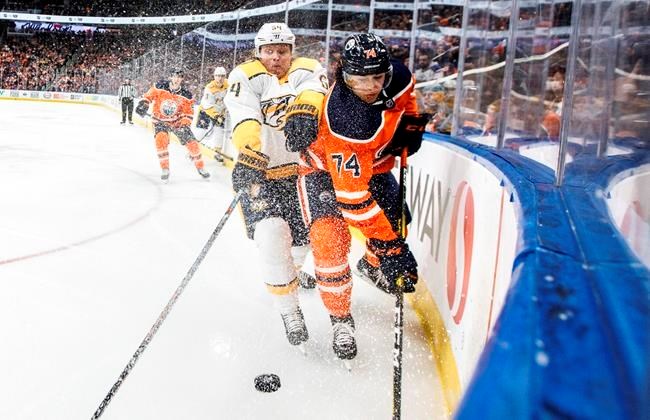 EDMONTON — The Edmonton Oilers needed to find a new gear and Leon Draisaitl ended up driving them to two badly-needed points.

Draisaitl had a pair of goals as the Oilers came away with a 3-2 come-from-behind victory over the Nashville Predators on Saturday.

“At this time of year it’s about sticking with it, it doesn’t have to be pretty,” Draisaitl said. “Two points is two points. It’s a gutty win for us and that’s huge for our group.”

Alex Chiasson also scored for the Oilers (29-20-6) who snapped a two-game losing skid.

Oilers head coach Dave Tippett said Draisaitl stepped up to the plate to counter a couple of off nights in the previous games.

“He is such a dominant player when he plays a big, strong game,” he said. “That’s where he was tonight. He just holds the puck and can dominate the game at times.

“He knew things weren’t going as well as he liked and he knows he is one of the leaders on our team and he played with a purpose to turn it around, and tonight he did.”

Craig Smith and Nick Bonino replied for the Predators (26-21-7) who lost for just the second time in their last six outings.

“I thought we deserved better,” said Nashville head coach John Hynes. “I really liked our game. I thought we played well enough to win, unfortunately a couple of bad bounces went in, particularly the first goal and then we have to find a way to kill that four-on-three.

“Unfortunately we didn’t find a way to be able to win it, but I think if we play like we did tonight, more times than not, we’re going to find a way to win games."

Nashville started the scoring 12 minutes into the first period as Craig Smith was able to poke a backhand off a rebound past Oilers goalie Mike Smith for his 12th goal of the season.

With Predators goalie Juuse Saros standing tall to keep the Oilers off the board, Nashville made it 2-0 with three minutes to play in the second period when Bonino was able to tip in his 17th off a shot by Dan Hamhuis.

Edmonton got a huge power-play goal with nine seconds left in the middle frame as a Connor McDavid shot hit teammate Chiasson on the way to the net and was then accidentally kicked into the net by Nashville’s Kyle Turris.

The Oilers tied the game up four minutes into the third as a deft backhand pass from Ryan Nugent-Hopkins allowed Draisaitl to come up the left side and blast a shot off the post and in.

Draisaitl then gave Edmonton the lead on a four-on-three power play with seven minutes left in the third, hammering a one-timer into the top corner for his 31st of the season.

Nashville pushed hard to even the game back up in the final minute, but Edmonton was able to hang on.

The Predators close out a four-game road trip on Monday in Vancouver, while the Oilers conclude a three-game homestand on Tuesday against the Chicago Blackhawks.

Notes: It was the second of three meetings between the two teams, with the Oilers winning the first encounter 4-2 on Jan. 14 in Edmonton… In the Edmonton net, Smith was playing in his 600th NHL game. He came into the contest with a record of 256-245-72… Out with injuries for the Oilers were Joakim Nygard (hand), Kris Russell (concussion) and James Neal (foot), while the Predators were without the services of Ryan Ellis (upper body) and Calle Jarnkrok (illness).

This report by The Canadian Press was first published Feb. 8, 2020.

A capsule look at teams in the Tim Hortons Brier
Feb 27, 2020 10:54 AM
Comments
We welcome your feedback and encourage you to share your thoughts on this story. We ask that you be respectful of others and their points of view, refrain from personal attacks and stay on topic. To learn about our commenting policies and how we moderate, please read our Community Guidelines.