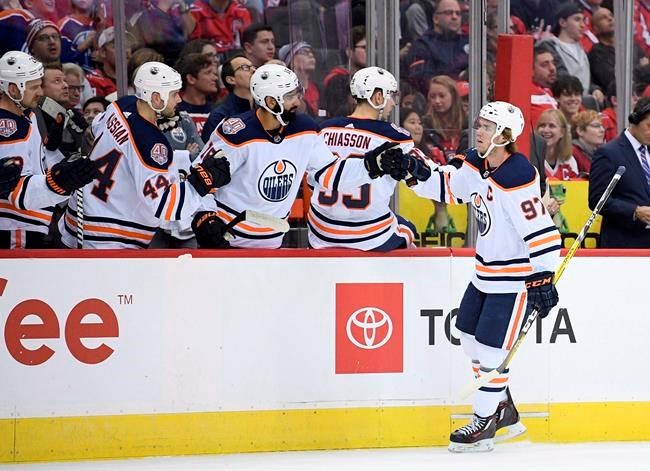 Edmonton Oilers center Connor McDavid (97) celebrates his goal with the bench during the first period of an NHL hockey game against the Washington Capitals, Monday, Nov. 5, 2018, in Washington. The Edmonton Oilers have signed defenceman Filip Berglund to a two-year entry-level contract. THE CANADIAN PRESS/AP-Nick

Berglund will be loaned to Linkoping HC of the Swedish Hockey League for the 2020-21 season.

Berglund, 22, had 20 points (five goals, 15 assists), 16 penalty minutes and a plus-4 plus-minus rating in 52 games with his hometown club Skelleftea AIK, this past SHL season.

The six-foot-three, 206-pound blueliner has appeared in 200 career SHL games, registering 53 points (10 goals, 43 assists), 80 penalty minutes and a plus-20 rating. He has also has four assists in 31 playoff games.

This report by The Canadian Press was first published May 1, 2020.