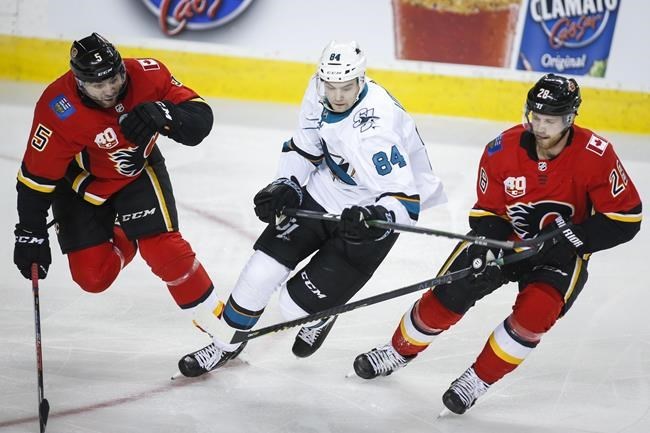 Calgary Flames general manager Brad Treliving says the team "dodged a big bullet" with defenceman Mark Giordano, who will be out week-to-week with right hamstring injury.

The Flames captain suffered the injury late in the second period of Tuesday's 3-1 loss to the San Jose Sharks. Giordano crumpled to the ice after contorting his body to attempt an off-balance one-timer.

"The good news is this is not as long-term as we initially feared," Treliving told reporters Thursday. "No surgical procedure, nothing of that nature. We'll get thorough the next week, his first week off, and then just monitor.

"Hopefully he's back sooner rather than later."

Calgary's game against Nashville on Thursday night is the first Giordano will miss due to injury since he tore his biceps tendon on Feb. 25, 2015 and was lost for the remainder of that season.

The 36-year-old has five goals and 22 assists with the Flames this season.

The injury to last season's Norris Trophy winner comes with the Flames in a dogfight for a Western Conference playoff spot. Entering Thursday's game , Calgary held down the second wild-card spot in the conference.

"You're never going to replace the Norris winner, our best player, our leader, hardest worker," defenceman Travis Hamonic said after Wednesday's practice. "When you go down the list, he's at the top for everything. So, you're never going to be able to replace a guy like that and I think everyone knows that, but at the same time, I think you have to keep pushing forward.