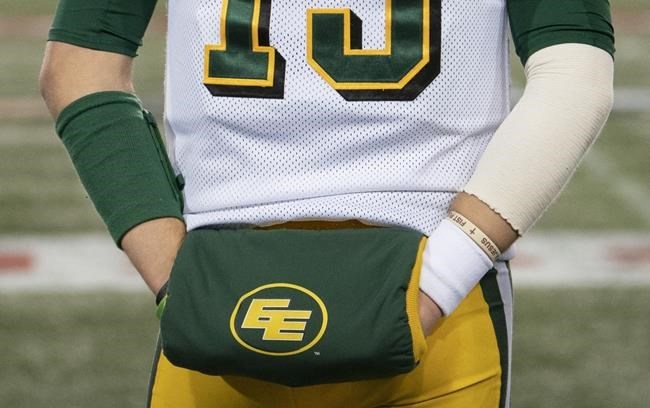 Eskimos quarterback Logan Kilgore (15) looks on from the sidelines late in the second half CFL football game action against the Hamilton Tiger Cats, in Hamilton, Ont., Friday, Oct. 4, 2019. Canadian Football Hall of Famer Hank Ilesic said he "absolutely" will continue to call himself a former Edmonton Eskimo even though the CFL franchise is retiring the longtime team name. THE CANADIAN PRESS/Peter Power

Canadian Football Hall of Famer Hank Ilesic said he "absolutely" will continue to call himself a former Edmonton Eskimo even though the CFL franchise is retiring the longtime team name.

Ilesic, who joined the team as a punter in 1977 and helped Edmonton win five straight Grey Cups from 1978-'82, said his reaction to the news Tuesday was "very mixed." The Edmonton native added that he felt the name was a tribute to the tough, hard-working people in the north that was in no way derogatory, negative or racist.

"Anybody who has put that green and gold jersey on, has put that Edmonton Eskimo helmet on, we have a saying," Ilesic said. "You may have heard this before: 'Once an Eskimo, always an Eskimo.' Period. No matter what tomorrow brings and that's fact. You can ask any player and they'll tell you that."

Former Edmonton stars Matt Dunigan and A.J. Gass published tweets with the "Once an Eskimo, Always an Eskimo" slogan after the name change was announced.

Critics say that Eskimo is a derogatory, colonial-era term for Inuit. The club said it has begun an engagement process on a new name and will use Edmonton Football Team and EE Football team in the meantime.

The change was announced Tuesday as pressure builds on pro sports teams to eliminate racist or stereotypical names.

In Major League Baseball, Cleveland Indians players met Tuesday with owner Paul Dolan to discuss a potential name change for the team. The Indians' move coincided with the recent decision by Washington's NFL team to stop using a derogatory term for Native Americans.

Boston Pizza recently ended its sponsorship of Edmonton's CFL team. Belairdirect had announced it was rethinking its relationship with the club and other sponsors said they'd welcome a review of the name.

"When you get pressure from your sponsors, I guess you have to try to appease everyone involved to some degree," Ilesic said from Orillia, Ont. "You have to. But the history of the Edmonton Eskimos will never change. Nobody can take that away from that organization, no matter what the name will be changed to."

The team announced in February that it was keeping the name following year-long research that involved Inuit leaders and community members across Canada. The club said it received "no consensus" during that review.

Earlier this month, Edmonton promised to speed up another review of its name. In that statement, the club noted "a lot has happened" since February.

"When I look at memorabilia, team pictures, my jersey, my helmets and the Grey Cup and all those points of identification of what the team used to be called, I don't think that's ever going to leave," said former Edmonton running back Neil Lumsden. "I think there's a footnote that the name is going to be changed ... probably moving forward that's the way history will show it."

There have been repeated calls in recent years for the franchise to drop the name. In 2015, Canada's national Inuit organization said it was time for a change.

Lumsden, who won three Grey Cups in Edmonton and was the top Canadian in the 1981 championship game, said he understands why the decision was made.

"Listening to the conversations and reading the articles and the commentaries around it, it really makes you sit down and think, as all of this should," the Hall of Famer said from St. Catharines, Ont. "I have the greatest respect for the football team, what it represented to me, my teammates and my family. But I never looked at it in that way — whether it was the Edmonton Football Club, the Edmonton Eskimos, the green and gold, that's who we were professionally.

"But I would guess close to, if not 100 per cent of the players at the time and even after that, if there was a suggestion that the Eskimo name was being disrespectful, we would have had a conversation. There's no doubt in my mind. That'd be the last thing that we'd want to do is insult or disrespect by using that name inappropriately."

The team said it hopes to keep its double-E logo and its green and gold colours.

The start of the 2020 CFL season has been postponed due to the COVID-19 pandemic. It remains unclear whether games will be played this year.

This report by The Canadian Press was first published July 22, 2020.

Connor McDavid scores twice as Oilers beat Flames 4-1 in NHL exhibition game
Jul 29, 2020 8:41 AM
Comments
We welcome your feedback and encourage you to share your thoughts. We ask that you be respectful of others and their points of view, refrain from personal attacks and stay on topic. To learn about our commenting policies and how we moderate, please read our Community Guidelines.