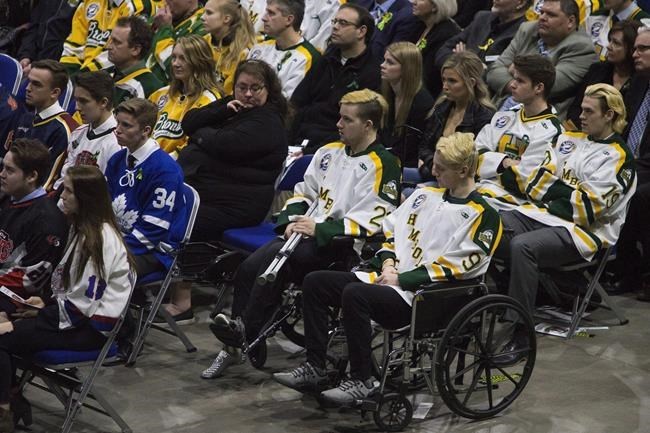 urvivors Graysen Cameron, right, and Derek Patter watch a tribute during the funeral of Humboldt Broncos player Evan Thomas in Saskatoon, Sask., Monday, April, 16, 2018. Cameron, who broke his back in the Humboldt Broncos bus crash two years ago, has committed to play NCAA hockey for Northland College in Wisconsin. THE CANADIAN PRESS/Kayle Neis

ASHLAND, Wis. — Graysen Cameron, who broke his back in the Humboldt Broncos bus crash two years ago, has committed to play NCAA hockey for Northland College in Wisconsin.

The 20-year-old from Olds, Alta., was captain of the Broncos this past season. Northland College is an NCAA Division 3 school.

"I'm proud to announce my commitment to @LumberJackHKY thanks to all my coaches, trainers, teammates, friends, @HumboldtBroncos and most importantly all my family for helping me over the last year and a half get back on the ice and play... Dream come true," Cameron said in a tweet.

Sixteen people died and 13 were injured when a transport truck barrelled through a stop sign and crashed into the Humboldt Broncos team bus April 6, 2018.

Cameron, who also sustained a concussion and an eye injury, underwent surgeries on his back that year.

He spent a season as an assistant coach of the midget Red Deer Optimist Chiefs before returning to the Broncos.

The six-foot winger contributed five goals and eight assists in 46 games in 2019-20.

"We are beyond excited to announce that our Captain, Graysen Cameron has committed to Northland College," the Broncos said on the team's Twitter account.

"His dedication, work ethic and leadership is above anything you could ever ask for. We are truly honoured to call Graysen a Bronco, and we always will."

This report by The Canadian Press was first published April 26, 2020.