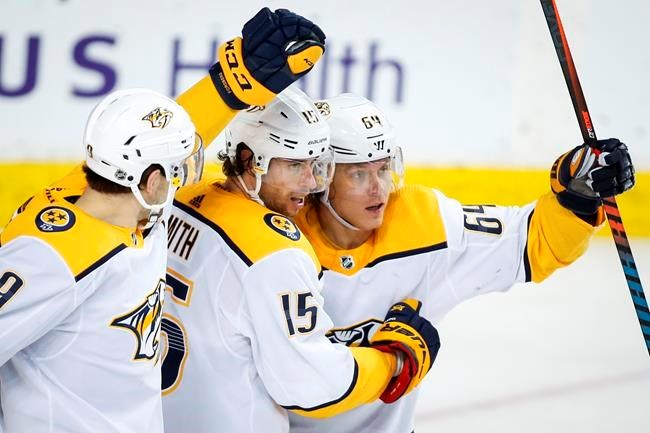 Granlund scored the eventual game-winner and also added an assist on Thursday to lead the Nashville Predators to a 3-2 victory over the Calgary Flames.

After assisting on the tying goal in the first, Granlund made it three straight for the visitors at 9:06 of the second, poking in a rebound after Cam Talbot had stopped the initial blast from the blueline by Roman Josi. The power-play goal came on the Predators' only man advantage of the game.

Six of Granlund's 12 goals on the season have come in the 12 games since Hynes took over behind the bench on Jan. 7 for the fired Peter Laviolette.

“When pucks are going in, that’s when the confidence comes,” said Granlund. “But at the same time I’ve been out there a lot, getting a lot of minutes and chances. You just try to take advantage of that.”

“He’s a good, smart, competitive player that has offensive skill. He’s bringing that to the table but the big thing is he’s been consistent,” says Hynes, whose record is 7-5-0. “He plays the game in the right areas. He’s very strong at the net front offensively. He’s strong on his puck battles. He’s a very smart player. I can use him everywhere.”

It was an important victory for the surging Predators, who have won four of their last five to climb within one point of the Flames for the second wild card spot in the Western Conference. The Predators hold two games in hand.

“Huge win for us,” said Josi, who had two assists to surpass the 400-point plateau for his career. “We’re a confident group. We need to make a push. We’re not happy with where we are, but we’re feeling confident and we’re excited to make that push.”

Rasmus Andersson's goal at 11:06 of the second drew the Flames back within a goal, but Juuse Saros shut the door the rest of the way,

After a 33-save performance Tuesday in a 2-1 win in Winnipeg, Saros got the start again and made 37 stops to improve to 9-8-4. His best stop was a pad save off Matthew Tkachuk as Calgary failed to convert a late second-period two-on-one that would have tied it.

Cam Talbot, in his first appearance since he was thrown out of Saturday's game against Edmonton after his fight with Mike Smith, made 32 saves. His record falls to 7-8-1.

Sam Bennett also scored for Calgary (27-22-6). After losing all three games on their homestand in regulation, the Flames head out on a four-game road trip that begins Saturday night in Vancouver.

Flames interim head coach Geoff Ward, visibly frustrated, spoke post game about his club's lack of urgency. Entering the third period down by a goal, they went over 12 minutes without a shot.

“It’s about how hard you want to compete,” Ward said. “At the end of the day when there’s a loose puck, are we getting it or are they getting it? And right now we’re not getting it enough.”

Calgary got off to a fast start with Bennett snapping a 12-game goalless drought just 33 seconds into the game. But the lead lasted less than two minutes with Fabbro tying it at 1:49.

“It's getting frustrating,” Tkachuk said. “It's crunch time right now. We've just got to play our game and get to it early. There's no excuse why after we make it 1-0, it's 2-1 after the end of the first period. We've got to do a better job of playing with the lead.”

Calgary was without captain Mark Giordano (hamstring), his first game missed due to injury since February 2015. The Flames captain is out week-to-week. In the absence of the club's ice-time leader, Travis Hamonic jumped up to the top pairing to join TJ Brodie. That pair was on the ice for all three Predators goals.

“This needs to be a desperate group right now,” said Talbot. “You look at the standings and teams are closing quickly. We needed this one tonight.”

The Predators took 2-1 lead at 11:43 when Turris banged in a loose puck during a scramble in front.

Notes: Calgary C Elias Lindholm had an assist to extend his point-streak to five games (3-2-5)... Brandon Davidson, called up earlier in the day from Stockton (AHL), stepped right into the Flames line-up with Oliver Kylington (illness) also not available.