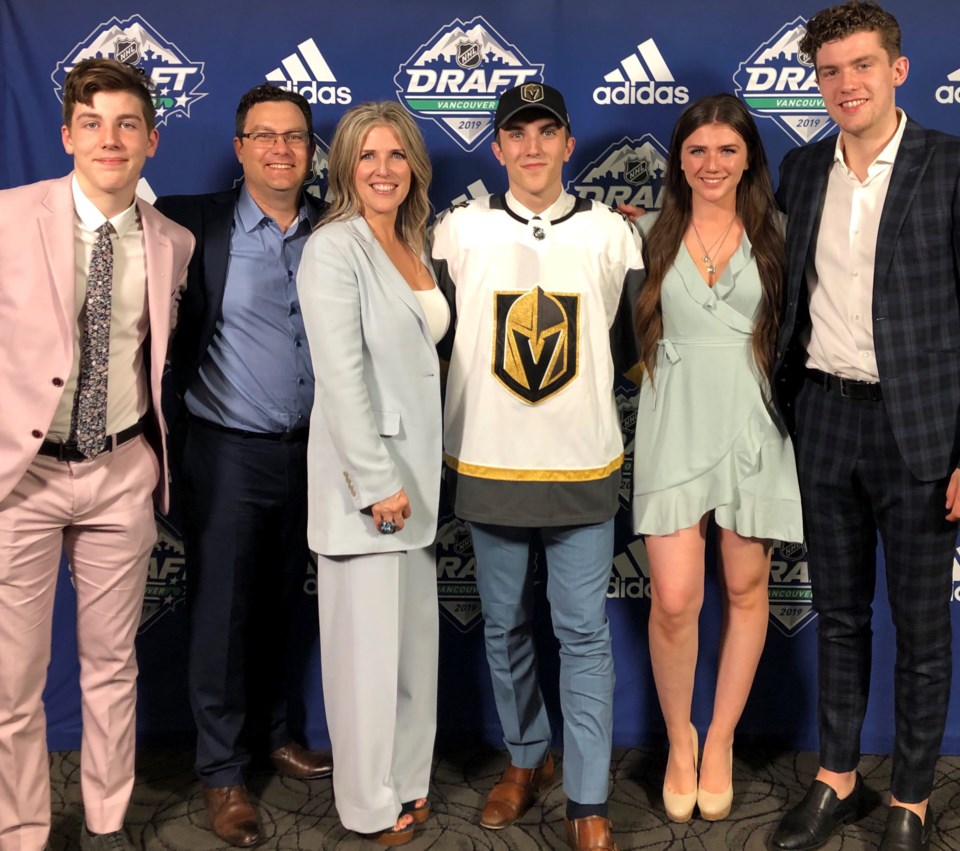 Peyton Krebs, flanked by his family at the 2019 NHL Draft, from left Dru, Greg, Cindy, Peyton, Maddison and Dakota, was part of the Vegas Golden Knights' NHL playoff run as a black-ace for the squad. (Photo submitted)

But for those getting their first taste of a National Hockey League post-season, like Okotokian and Vegas Golden Knights prospect Peyton Krebs, it’s hard to come away with the experience with anything but glowing reviews.

“I had a blast and took away so much from it,” said Krebs, the Golden Knights’ first-round draft pick in 2019. “I learned so much each and every day and just the experience from being with the team and that atmosphere, practising every day and warming up, I gained a lot of knowledge and experience I didn’t have before.

“I think it’s going to help me a lot in the future.”

The 19-year-old skated in warm-ups at times in Vegas’ playoff series against the Chicago Blackhawks and Vancouver Canucks as one of the black-aces on the Golden Knights roster.

“That was amazing,” said Krebs, a Foothills Composite alumnus. “If you had told me I would be doing that at the start of last summer I would have been pretty fired up.

“Skating around the ice and seeing guys without helmets on in warm-ups you realize you’re in the Show and it’s pretty awesome. I had a lot of fun, obviously it would have been a lot more fun to play, but I think those guys deserved to play and they did a great job out there.”

After impressing at the summer training camp in advance of the playoffs, Krebs was one of 31 players to make the Golden Knights’ playoff roster.

He did so following an injury-shortened season as captain of the Winnipeg Ice, seeing 38 games of action for the Western Hockey League squad after recovering from an Achilles injury sustained prior to last June’s NHL draft.

“For me, I was just going to go in and work my hardest and see where I was at,” he said. “I hadn’t really skated at the NHL level, I had one practice under my belt with the guys right before I got sent back to junior last year.

“I wanted to come in there and feel it out. It ended up working out great, I felt great during the training camp and from there just tried to keep playing hard and practising hard every day in order to be ready to maybe play in a game.”

The Golden Knights departed for the bubble in late July and advanced through to the Western Conference final, ultimately bowing out to the Dallas Stars in five games.

The players were confined to their hotel, Edmonton’s Rogers Place and a practice rink facility, save for a few trips for team bonding activities, during their 50-day stay.

“For me, I had a lot of fun as a younger guy, fresh coming in,” Krebs said. “Some of the older guys that have been around a lot it might not have been as fun, but no it was really good. I got to know a lot of guys that maybe I didn’t know in the past. Jon Merrill and Deryk Engelland, were two of those guys, I hung out with them a lot, Marc-André Fleury and a few other guys, Mark Stone, all of the aces I got to know really well.

“I think those relationships are going to last a long time. I want to play with those guys for the next 10 years and do everything I can to make the roster because it was a blast.”

Krebs, who signed his three-year entry-level contract with Vegas last November, was also extremely motivated to put in a good impression for Golden Knights bench boss Peter DeBoer and general manager Kelly McCrimmon while in Edmonton.

DeBoer told media in late-August that Krebs “made a huge impression on us through camp” when asked about the forward skating in warm-ups.

“It was my first time skating in front of Pete and the rest of the management and just wanted to play hard and show what I can do,” he said. “I’m here to make the team and that’s what I want to do, make an impact and turn their heads that I can play as a younger guy and help the team win.

“I look back at times, going to watch NHL games here in Calgary and it’s pretty surreal to know that I’m this close and it just motivates me to work harder every day.”

Though just three years into its run as an NHL franchise, Vegas has established itself as perennial Cup contenders and the Golden Knights were one of the prohibitive favourites entering the bubble.

That’s an exciting prospect for one of its top prospects.

“It’s my first taste of the NHL and to be a part of a team that is so high up there, from talking to the guys and experiencing it you don’t realize how good you’ve got it and how deep of a team we have,” he said. “It’s exciting, for sure, and I think this year was another we could have won it and the next few years we’re going to be even closer.”

Star goaltender Devin Buffalo wants to help Indigenous youth on the ice and off
Oct 22, 2020 12:45 PM
Comments
We welcome your feedback and encourage you to share your thoughts. We ask that you be respectful of others and their points of view, refrain from personal attacks and stay on topic. To learn about our commenting policies and how we moderate, please read our Community Guidelines.