CALGARY — A good start and a strong finish propelled the Edmonton Oilers to an 8-3 win over the Calgary Flames on Saturday. The Oilers jumped out to an early 2-0 lead and extended it to three before the Flames rallied in the second period.
Feb 2, 2020 12:15 AM By: Canadian Press 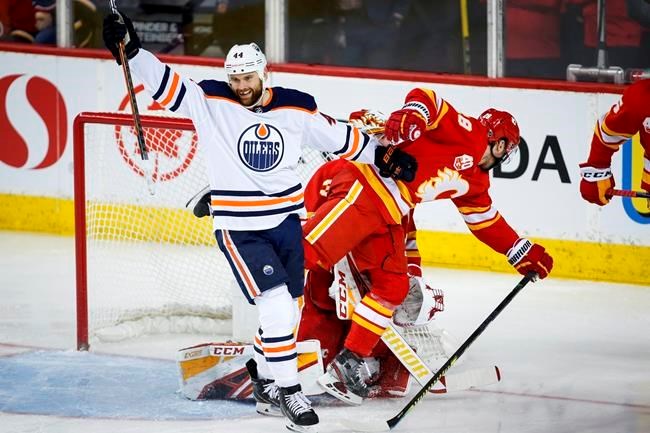 CALGARY — A good start and a strong finish propelled the Edmonton Oilers to an 8-3 win over the Calgary Flames on Saturday.

The Oilers jumped out to an early 2-0 lead and extended it to three before the Flames rallied in the second period. Edmonton then reeled off four unanswered goals to earn their first win over the Flames (27-20-6) in four tries this season.

Connor McDavid scored twice and Kailer Yamamoto had a goal and an assist for the Oilers (28-18-6), who have won two straight games since losing 4-3 in a shootout at home to the Flames on Wednesday.

“When we start better, we start on time,” said Oilers forward Leon Draisaitl, who chipped in four assists. “We’ve lost a few games against them this season so we wanted to come out strong and come out fast.”

Draisaitl also took the time to share his thoughts on Rittich's stick-flip celebration following his shootout-winning save against the NHL's leading scorer when the Oilers and Flames met last Wednesday.

"It's just disrespectful," Draisaitl said. "We hit two posts and he's celebrating like they just won the Stanley Cup. Just show some respect, that's my opinion."

Mike Smith, who spent the last two seasons as Rittich's teammate in Calgary, acknowledged that the pair have on-going relationship but did admit the Flames netminder took things too far.

"What goes around comes around," said Smith.

Zack Kassian, Ryan Nugent-Hopkins, Caleb Jones, Sam Gagner and Gaetan Haas also scored, while Smith made 15 saves to record the win before being ejected from the game with 24 seconds left in the second period for a secondary fight with Flames netminder Cam Talbot.

Mikko Koskinen played the final 20:24 of the game in net for the Oilers and stopped all eight shots he faced.

“They’ve kind of took it to us the last three times we’ve played them,” added Smith, who signed with the Oilers on July 1 after playing the previous two seasons with the Flames. “I feel like we hadn’t played our best game against Calgary yet. Tonight was a lot better.”

“We allowed their best players to really feel it tonight and that was the difference,” Giordano said. “When they’re getting chances, they’re a really dangerous team and we didn’t do a good enough job of eliminating odd-man rushes and zone time. It felt like they had a lot of space out there tonight.”

David Rittich started in net for Calgary, but was pulled 3:18 into the second period after allowing four goals on 17 shots. Talbot made 21 saves in a relief appearance before being ejected from the game for the secondary fight with Smith. Rittich then went back in net and made nine more saves.

The Oilers opened the scoring 29 seconds into the game when Yamamoto picked up a rebound and slid a shot past a sprawling Rittich.

Just 36 seconds later Kassian took a pass from Josh Archibald and lifted a shot into the top-right corner.

The Flames had a great chance to score a short time later when Smith ventured behind his net to play the puck, but had to scramble to get back into position before he extended out his stick to stop Johnny Gaudreau.

Robinson pulled Calgary within a goal at 12:42 of the first when he took a pass from Gaudreau before chipping the puck up and over Smith’s right pad and into the net. It was his first goal as a Flame and first since scoring against the Florida Panthers as a member of the Ottawa Senators on Apr. 17, 2016.

“It was definitely a special moment for myself to score a goal after all this time and have a friend like [Gaudreau] assist on it on a cool play, but it’s just something that I’m going to have to just kind of put in the memory bank and get ready to go back to work tomorrow,” Robinson said.

McDavid restored Edmonton’s two-goal lead at 15:33 by snapping a shot from the slot through a screen and over Rittich’s blocker.

McDavid added his second of the game 3:18 into the second. Rittich got a piece of the shot with his right arm, but the puck still got past him.

The Flames fought back within a goal as Tkachuk beat Smith off a feed from Andrew Mangiapane at 4:35 of the second, before Lindholm banked the puck off the Oilers netminder’s leg and into the net from behind the goal line at 10:14.

The Oilers responded 83 seconds later when Nugent-Hopkins scored thanks to a great pass from Yamamoto.

Jones put Edmonton up 6-3 at 15:58 of the second when his slap shot from the point through traffic found its way into the net.

Tempers flared with 24 seconds left before the second intermission when Gagner poked a puck that was under Talbot into the net.

Although the goal was immediately waved off, several skirmishes broke out including a fight between Tkachuk and Ethan Bear and another at centre ice between Smith and Talbot.

“In a game like that, it kinds of sets you off and I reacted accordingly – probably not the smartest reaction on my part, but it is a highly emotional game and my emotions got the best of me,” Talbot said.

Smith didn’t like seeing Talbot mix it up with his teammates so he skated out to the red line.

“Old fashioned hockey right there,” Smith said. “Obviously Talbot gets in there and mixes up a little bit, throws some blockers. I didn’t really like that. I was just seeing what was happening there. He obliged.”

The teams were subsequently sent to their respective rooms and the remaining 24 seconds were played just prior to the start of the third period.

The Oilers scored the only two goals of the third as Gagner snapped a shot that fooled Rittich shortside at 13:16, before Haas scored on a penalty shot with 1:57 remaining in regulation.