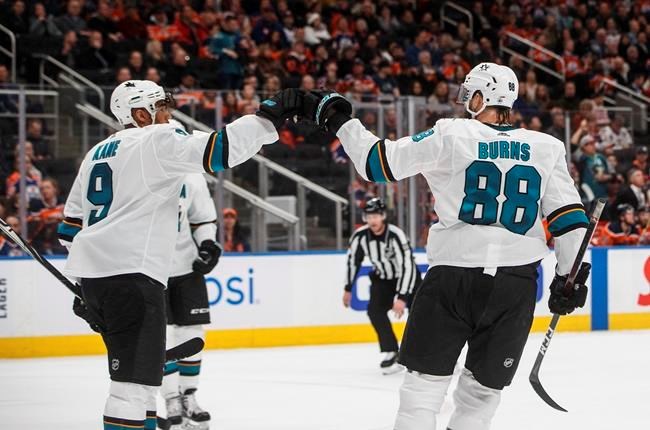 EDMONTON — The San Jose Sharks showed the value of persistent play on Thursday.

Timo Meier had two goals and an assist as the Sharks battled back for a 6-3 victory over the Edmonton Oilers.

Meier said it was a case of the Sharks being willing to pay the price.

“I thought that’s where most of our goals came from tonight, everybody went to the net and stopped at the net,” he said. “You have to grind it out. I know sometimes it’s painful, but that’s where you get rewarded and I think we did a good job of that.”

Evander Kane, Maxim Letunov, Stefan Noesen and Kevin Labanc also scored for the Sharks (24-27-4) who have won two in a row.

Sharks defenceman Erik Karlsson said the young players who have come in to replace injured veterans have been making an impact.

“They are bringing a lot of energy and they’re playing the same way no matter what the score is, and I think that brings up the veteran guys that maybe think a little bit too much when things happen and the kids just go out there and play,” he said.

“We were just flat, emotionless,” McDavid said. “We’re at our best when we’re playing with emotion and being physical and in guys’ faces and playing the right way. Two nights in a row we’ve been pretty flat, and maybe it’s a little bit of a letdown from those games in Calgary and whatnot, but we can’t make excuses for ourselves. We’ve got to be better.”

Edmonton started the scoring four minutes into the opening period as Gagner, getting an opportunity to play with McDavid on the Oilers’ top line, cashed in on some relentless pressure by roofing a backhand shot from the slot for his fourth of the season.

The Oilers made it 2-0 just 76 seconds later as McDavid turned on the jets to dance around a defender and chip in his 30th of the season past Sharks goalie Aaron Dell. It is McDavid’s fourth consecutive 30-goal campaign.

San Jose cut into the lead 11 minutes into the first as Meier was able to tip a Brent Burns point shot past Edmonton starter Mikko Koskinen.

The Sharks tied the game with a power play goal coming with less than two minutes to play in the first frame as it was Kane’s turn to tip a Burns shot in for his 21st of the season.

San Jose surged into the lead seven minutes into the second period as Letunov won a battle in front to hook a rebound into the net for his first career NHL goal.

The visitors made it 4-2 with seven-and-a-half minutes to play in the middle period as the puck squirted out front and Noesen tucked it inside the goal post.

The Sharks scored their fifth consecutive goal five minutes into the third as Meier blasted a one-timer to the top corner for his 18th of the year.

Edmonton finally responded shortly afterwards as Bear jumped into the play and wristed home his fifth.

However thoughts of a comeback were ended with eight minutes to play as a Meier shot banked in off of Labanc in front.

The Oilers return to action on Saturday when they welcome the Nashville Predators to town. The Sharks are off until Monday when they return home to host the Calgary Flames.

Notes: Edmonton native Tyler Benson made his NHL debut for the Oilers after recording 101 points in 115 games for Bakersfield of the American Hockey League.