Memories of Sidney Crosby's golden goal ahead of 10-year anniversary 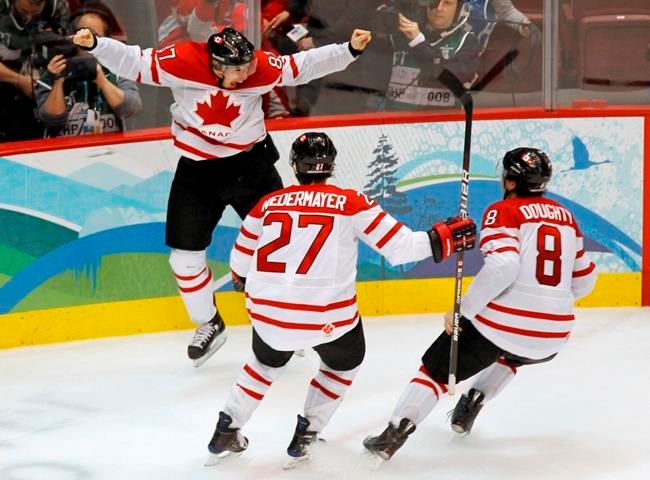 Friday marks 10 years since Sidney Crosby scored in overtime to lead Canada past the United States in the gold-medal men's hockey final at the 2010 Winter Olympics in Vancouver. The goal came after the Americans tied the game with less than 30 seconds left in regulation when Zach Parise buried a rebound. Here's how some prominent Canadians — and a few Americans — recall the moment Crosby beat U.S. goalie Ryan Miller for that memorable 3-2 win.

"We had to turn the page pretty quick. When they score that late, you don't have a lot of time to think about it. We had a pretty solid group there when it came to leadership and the poise that everyone showed. That's always something I'll remember."

"The whole downtown area pretty much wasn't going to sleep (the night before the game). In the Olympic Village, you could hear everything. The whole city was just partying all night. That night was tough to try and calm the nerves and just focus on hockey."

"I remember very well because my husband is a big hockey fan and I'm a big Canada fan. We were wearing Canadian jerseys. I had them from past Games. I remember screams in the house even though it was just the two of us."

"I was clearly pulling for the U.S. It didn't happen, but that was just a fun Olympics to watch. That game was a nail-biter."

"That night there was a big brouhaha at the village. A few of the hockey guys came back and nestled in with us for a couple cocktails."

"I was so proud to be Canadian in that moment. I'll never forget getting in the car with my wife and girls afterwards — we were driving downtown and the girls waved their Canadian flags out the windows. The streets were flooded with fans, everyone was beaming with Canadian pride."

"That one was probably my favourite Olympics. The weather in Vancouver was awesome, the city did a fantastic job in showcasing the city and Canada."

"It's the biggest game I'll ever call. The tension in the building was like none other I'll ever be in."

"I was lucky to be offered a last-minute ticket to the game. I was so excited that I arrived really early and when I got to the arena, there was an elderly gentleman who asked if I'd trade seats with him as he was having trouble walking. Of course I agreed to help him, but to my surprise his seats ended up being right behind the goal."

"I remember being so nervous for that game as I drove to my brother's house. I remember seeing a few hundred Canada flags on the windows of cars and trucks as I passed them on the highway. I remember arriving at my brother's with all our friends and family, thinking: 'This is the biggest game of our lifetime!'"

"We couldn't have hoped for a better ending. We were really happy for Canada, but also for Sidney. It's always fun to see former players of our league stand out in moments like this."

"I remember (Jarome Iginla) taking a hit along the boards so he could make the pass to Crosby. With Sid's patented quick release, the puck was in the net. The family erupted in celebration — major fist pumps at winning gold in our national sport right here in Canada."

"The entire building felt like a stress factory, minute by minute, followed by the loudest eruption of noise I ever heard. Crosby's goal was a perfect, storybook moment I will never forget. Afterwards, I was able to get one of the certified game pucks which is currently framed at my cottage to remind everyone who sees it that Canada can indeed punch above its weight in the world."

"I remember being on the edge of my seat. The back and forth, the stress of the U.S. tying the game in the dying seconds, and then — out of nowhere — total elation as Crosby came through when we needed him most. It was the perfect cap on a record-setting Olympics for Canada."

"It truly did feel like one of the last great Canadian sports moments that wasn't completely transformed by social media. We now consume sports wins, losses, triumphs and scandals through a far broader lens, as a big part of the public conversation online. But when we won gold in Vancouver a decade ago, that kind of moment felt more like an individualized experience, rather than some you'd share in that moment with millions of people across the country."

"I remember exactly where I was. That game is probably one of my all-time favourites."

"Something like the Olympics and sports is one thing that can bring the whole country together no matter your religious or ethnic background. I was really blown away by that and I was very proud. We don't put enough importance on that as Canadians — what sport can do to our nation and the importance it can have."

"At a lot hockey games (I've attended), people are there to have fun. This was a little bit of a different vibe. The building was crazy. It was tense in there."

"It was a huge disappointment when (the U.S.) lost in overtime. But if we were to lose to anyone, I was still happy for the Canadian win, especially given their love for hockey and (as) the host of the Games."

"I remember with about two minutes to go, I actually thought, 'You're going to have to have a call, because it's coming.' Everybody jokes about the jinx, but it was in my mind. And with 30 or 40 seconds the game was tied."

"After the game it was kind of a little bit of a relief. All the work that they'd put in, the volunteers and the people that set it up, Vancouver. It was just a great way to end the Olympics. Everybody was really proud to be Canadian and we got to showcase our great country on a world stage."

Athletes applaud decision to pull out of Olympics
Mar 23, 2020 9:00 PM
Comments
We welcome your feedback and encourage you to share your thoughts on this story. We ask that you be respectful of others and their points of view, refrain from personal attacks and stay on topic. To learn about our commenting policies and how we moderate, please read our Community Guidelines.