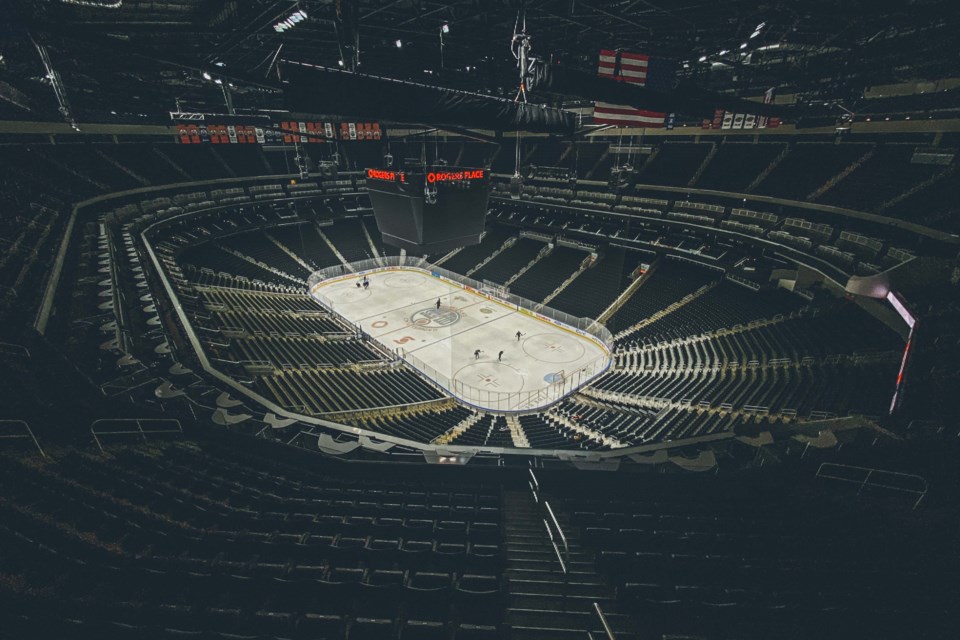 A shot from inside Rogers Place in Edmonton. PHOTO by Tim Trad on Unsplash

Edmonton is under consideration by the NHL as a hub where games could be played in a compressed timeline to complete the regular season.

Alberta premier Jason Kenney said Wednesday he'd had a conversation with NHL commissioner Gary Bettman, who seemed to be interested in Edmonton as one potential site.

"I did receive a call from NHL commissioner Gary Bettman, who wanted to ask some questions about Alberta's status and combating COVID," Kenney said in Edmonton.

"There was a very general conversation. We have not received a formal proposal of any kind.

"I underscored if a proposal were forthcoming, we would obviously expect the league to prepare a very detailed plan to mitigate risk.

"It's pretty clear to me that if something like that were to happen, we would not have large crowds gathering in arenas.

"I gather the NHL is looking at finishing the season in arenas for television purposes without large crowds. Whether or not we could accommodate that, we do not yet know."

Under one scenario the league is mulling to finish the regular season, four NHL arenas would host three games per day without fans, Bettman told Sportsnet on Wednesday.

The commissioner said the league has moved away from the idea of games in non-NHL centres because NHL arenas have more locker rooms — which can be sanitized as teams move in and out — and are better equipped for technology and broadcasting equipment for television.

The NHL has extended its self-quarantine recommendations to players until April 30. Bettman says the NHL Players' Association wants a three-week training camp before a regular season could resume.

The province is currently restricting gatherings of people to no more than 15, and that "includes large sporting events."

"As we look at the future and look at that re-launch, those may shift and change based on our epidemiology and where our numbers are.

"Whatever those orders are and the requirements are, we will be looking to see a proposal that lines up with those."

This report by The Canadian Press was first published April 22, 2020.

Lake Louise world cup plans 'moving forward' until further notice
May 26, 2020 4:12 PM
Comments
We welcome your feedback and encourage you to share your thoughts. We ask that you be respectful of others and their points of view, refrain from personal attacks and stay on topic. To learn about our commenting policies and how we moderate, please read our Community Guidelines.