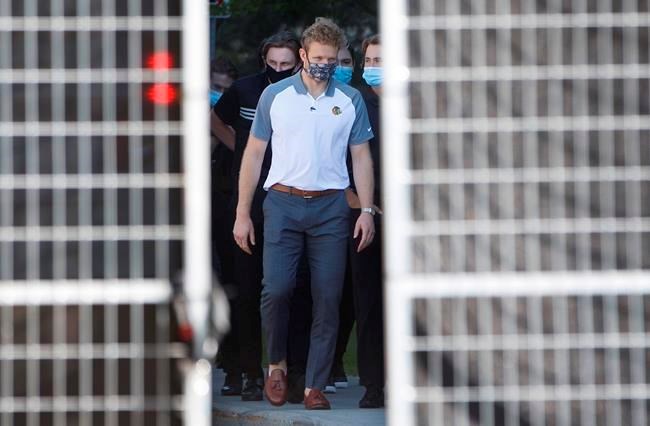 Chicago Blackhawks team members arrive in Edmonton on Sunday July 26, 2020. NHL players settled into the hub cities of Edmonton and Toronto on Monday for what feels like an extended road trip with some odd wrinkles. Their lives will largely consist of an arena and a hotel for as long as their respective teams remain in the playoffs, starting in summer because of the COVID-19 pandemic. THE CANADIAN PRESS/Jason Franson

NHL players settled into Edmonton and Toronto on Monday for what will be the mother of all road trips for some.

Meanwhile, the Maple Leafs and Oilers are now ensconced in hotels in their home cities.

"Obviously it is a little weird being home, but being in a hotel instead of your house," Leafs forward Mitch Marner said during a media video conference call.

Almost 800 players and dozens more team staff have embarked on the completion of a 2019-20 season suspended on March 12 because of the COVID-19 pandemic.

If the virus doesn't derail the NHL's plans, two teams could be playing in the Stanley Cup final as late as Oct. 4 in Edmonton.

The 24 teams in Cup contention got a first taste Monday of what moving between hotels and arenas entails, and what extended hotel living will look like.

"I think today is the day that a lot of these questions get answered," Winnipeg Jets head coach Paul Maurice said.

"And that's how do you move an NHL team through its day in the situation that we're in? By the time we're done our day here, we'll have a pretty good handle on how this is all going to work."

Playing hockey — albeit in front of empty seats — might be the easiest adjustment for those whom the sport is second nature.

Daily testing, wearing masks and credentials, swapping dressing rooms, how they'll eat meals and occupy their time between games were all new habits to be established.

"We don't get to grab our own food. That's a little different, being served," Jets forward Adam Lowry said.

"You know you're going to be here hopefully for a while, (so) just to get used to some of the protocols, wearing a mask and make sure you've got your credentials on.

"Some of the things you fill out before you enter the rink, that's going to take a couple days to get used to, but that's not anything that's too drastic."

The NHL's hub-city concept is designed to wall off players and staff from the general public to prevent contagion.

The league said no players tested positive for the virus in the final week of training camp July 18-25, which is in stark contrast to Major League Baseball's resumption of the season.

Monday's Miami Marlins home-opener was cancelled due to a number of players testing positive for COVID-19.

"Getting everyone here was probably the biggest stress point of this whole thing," Oilers goaltender Mike Smith said. "There were no positive tests here in the last week or so, so that's important.

"As players I think we feel pretty safe where we're at right now."

"You've got to make your little one-bedroom apartment here for the next couple months as homey as you can," Nashville Predators defenceman Matthias Ekholm said.

The Predators and Calgary Flames arranged to have family photos in each player's hotel room upon arrival.

"They must have skipped my room," quipped Winnipeg's Adam Lowry.

This report by The Canadian Press was first published July 27, 2020.

Star goaltender Devin Buffalo wants to help Indigenous youth on the ice and off
Oct 22, 2020 12:45 PM
Comments
We welcome your feedback and encourage you to share your thoughts. We ask that you be respectful of others and their points of view, refrain from personal attacks and stay on topic. To learn about our commenting policies and how we moderate, please read our Community Guidelines.