Oilers' Draisaitl reflects on Art Ross Trophy win: 'You dream of these things' 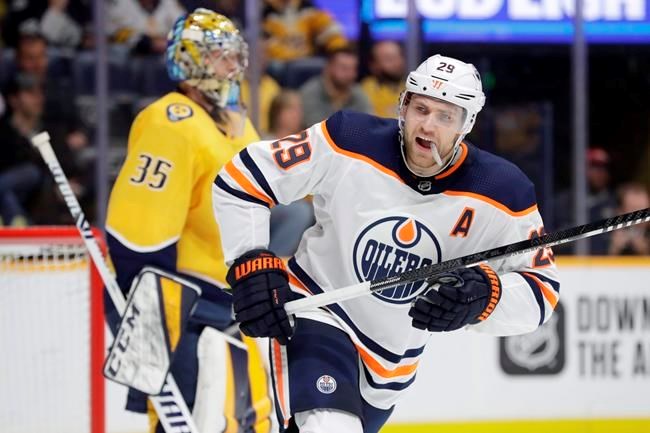 Leon Draisaitl had just wrapped up a phone call with Alphonso Davies.

The German hockey star and the Canadian soccer sensation have a lot in common.

A dominant centre for the Edmonton Oilers, Draisaitl became the first athlete in his country's history to lead a North American sports league in scoring when he was awarded the Art Ross Trophy earlier this week after the NHL called time on its novel coronavirus-hit 2019-20 regular season.

Davies, meanwhile, the Canadian refugee-turned-soccer-phenom, is turning more heads each week for Bayern Munich in the Germany's Bundesliga, with his matches becoming must-see-TV for many fans back home.

The pair — elite talents from non-traditional countries in their sports — have stayed in touch since the 19-year-old Davies dropped the ceremonial puck at an Oilers' game in December.

"I kind of know what he's going through right now with soccer being so big back home and hockey being big in Canada," Draisaitl said on a video conference call with reporters Thursday. "Coming over and trying to adjust and find your rhythm, find your game, find your life a little bit.

After a stuttering start to his NHL career, Oilers fans feel the same way about Draisaitl.

The 24-year-old finished the regular season with 43 goals and 110 points in 71 games, 13 clear of teammate and fellow star Connor McDavid.

"I'm proud of it," he said of the Art Ross. "It's a cool story for myself personally, no question."

That story, however, had a somewhat rocky beginning.

The No. 3 pick at the 2014 draft got a 37-game audition with Edmonton as a teenager before getting sent back to junior. Draisaitl arrived at training camp the following September looking to stick, but was shipped to the minors for six games.

"I don't think I was ready at the time," Draisaitl said of playing in the NHL as a teenager. "It's OK to maybe take a step down. That was the case with me. In the long run, that was probably the best thing for me, to go back down to junior and start the next year in the AHL.

"Sometimes it's not a bad thing to take a step back and go at your own pace."

Draisaitl's pace has certainly ramped up drastically since those difficult first few seasons.

Along with McDavid, he's been at the forefront of the Oilers' resurgence that saw the team sitting second in the Pacific Division with 83 points when the COVID-19 pandemic forced the NHL to pause play March 12.

McDavid is the face of the franchise and one of the faces of the league — but it's their team.

"It's been great to stick around the same group of guys for so many years now and see them grow and watch the team grow, watch the organization grow," Draisaitl said. "It's definitely a lot of fun to be a part of. We still have a lot of upside."

"We're heading in the right spot as a country," Draisaitl said. "Germany just isn't a big hockey country. That's just how it is, but we can still become a very solid hockey country."

The NHL unveiled its return-to-play plan earlier this week — there's still lots of hurdles to overcome for the games to actually resume this summer — but the Oilers know if that happens, they'll face the Chicago Blackhawks in one of eight best-of-five qualifying round series for a right to make the playoffs.

Draisaitl and McDavid started the season on the same line, as they had in the past, but were split up in December to give the team a different look. Draisaitl then carried the load himself when McDavid went down with an injury in February.

"What he's done for our group has been great," said McDavid, who along with Draisaitl are in the running for the Hart Trophy as league MVP. "He's helped both our team and me personally out a ton."

"He's always been very confident, he's always been an unbelievable hockey player, and he just continues to work," Nurse said. "He didn't change much. He just kept playing."

Never one keen to talk about himself, Draisaitl was more than happy to share the credit for his Art Ross.

"There's always people that help you get there," he said. "You dream of these things.

"But until you do it, it always seems so far away."

This report by The Canadian Press was first published May 29, 2020.

Foothills businessman elected to Hockey Alberta board
Nov 28, 2020 3:15 PM
Comments
We welcome your feedback and encourage you to share your thoughts. We ask that you be respectful of others and their points of view, refrain from personal attacks and stay on topic. To learn about our commenting policies and how we moderate, please read our Community Guidelines.