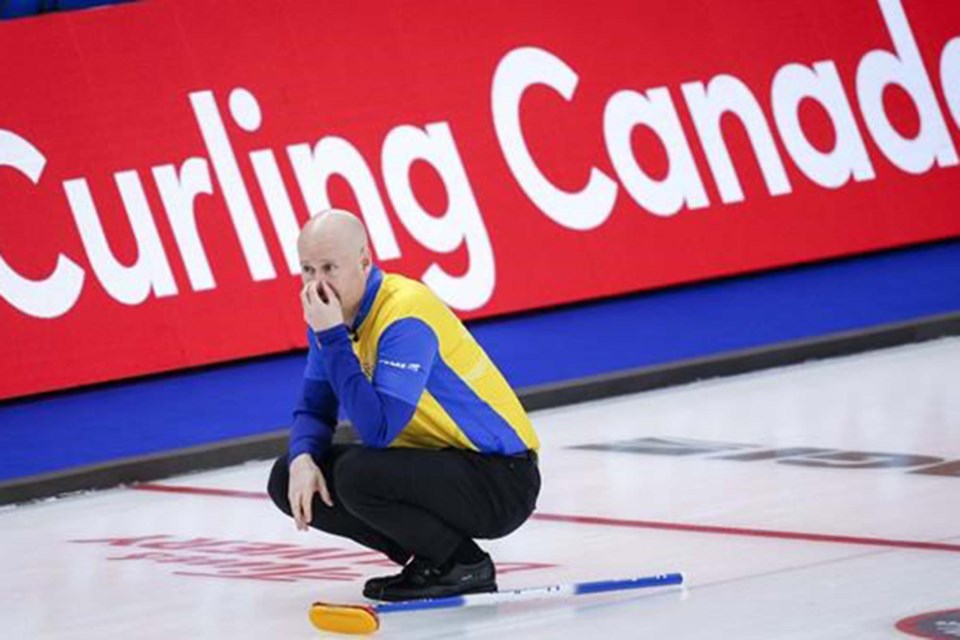 Team Wild Card Two skip Kevin Koe reacts to his shot as he plays Team Newfoundland and Labrador at the Brier in Calgary, Alta., on March 6.THE CANADIAN PRESS/Jeff McIntosh

CALGARY — Two of the favourites in the Canadian men's curling championship field showed Sunday night why they're expected to be in the playoff mix again this year.

Down one with hammer coming home, Koe put the pressure on by sitting three. Gushue was a tad heavy with his final draw and Koe picked it out for the victory.

Every player shot at least 80 per cent in a back-and-forth battle between longtime rivals.

"That was definitely a signature-type game for us I think," said Koe third B.J. Neufeld. "It's good to have it here early."

Koe improved to 4-0 after seven draws at the WinSport Arena while Gushue fell to 2-1.

Koe is hoping to win a record fifth career Tim Hortons Brier title as skip. Gushue, from St. John's, N.L., has won the Brier in three of the last four years.

"I think we learned that if we're in a tight game against a good team that we can pull it out at the end," Koe said. "Make the shots that we need to and that's always a good feeling to do that."

Quebec and Ontario moved into a second place tie in Pool B at 3-1. Gushue was tied in fourth place with Saskatchewan's Matt Dunstone.

"Our schedule is a little back-heavy in terms of the favourites in the pool, which is probably a good thing," Koe said after the early win. "We've (had) a few games to figure some stuff out and play some real games for the first time in a long time.

"Now we're looking forward to the challenges ahead."

Gushue offered a significant test from the start, opening with hammer and scoring a deuce when Koe was heavy with his last draw.

The defending champion had rare back-to-back misses in the second end and Koe took advantage by scoring three. Koe made a draw for two in the sixth for a 5-3 lead but Gushue pulled even with a hit for a pair.

Koe was forced to one in the eighth and Gushue made a draw for two to take the lead in the ninth.

With the victory, Koe improved to 38-26 in career head-to-head matchups against Gushue.

In the afternoon draw, Wayne Middaugh - who's throwing fourth stones for the injured Glenn Howard on Wild Card Three - led the Ontario-based rink to a 12-2 rout of Yukon's Dustin Mikkelsen.

Middaugh moved into a first-place tie with idle Manitoba atop the Pool A standings at 2-0.

"Now we've hopefully learned a few things and we can keep playing at a good level with the really top teams that are here," Middaugh said.

With the game well in hand, Howard came on for the last two ends to play lead for the first time in his long career. He has moved into the alternate role at the 10-day event as he's nursing sore ribs.

The preliminary round continues through Thursday night. The top four teams in each pool will advance to the two-day championship round.

The semifinal and final are set for March 14. The champion will represent Canada at the world men's curling championship next month in the same Canada Olympic Park venue.

This report by The Canadian Press was first published March 7, 2021.