Airdrie-East MLA Angela Pitt once again took aim at her party’s leader on social media, after a photo of Premier Jason Kenney dining with colleagues at the Sky Palace, located in a government high-rise office in Edmonton, went viral.
Jun 10, 2021 11:15 AM By: Jordan Stricker 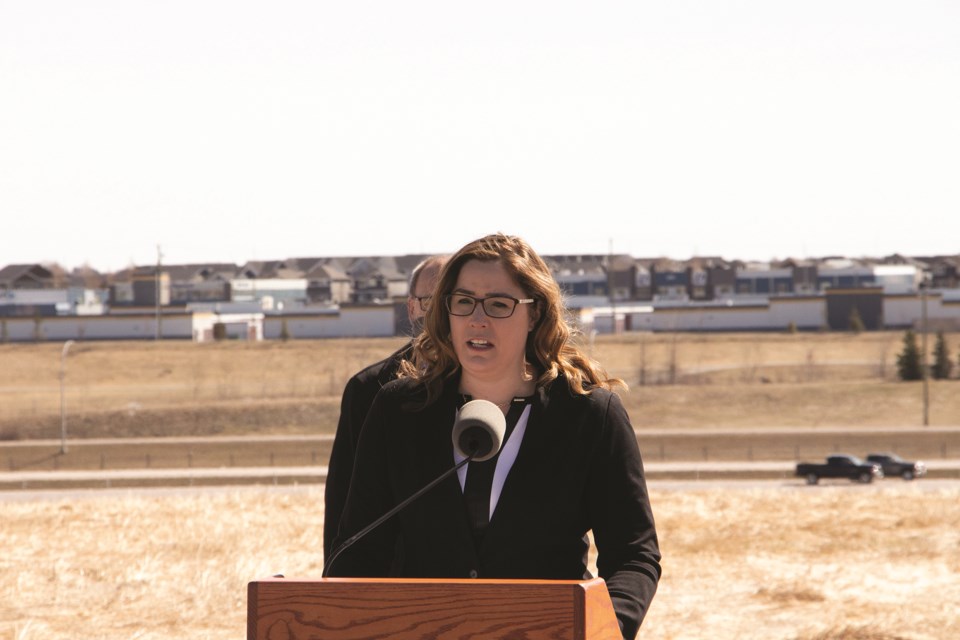 Airdrie-East MLA Angela Pitt once again took aim at her party’s leader on social media, after a photo of Premier Jason Kenney dining with colleagues at the Sky Palace, located in a government high-rise office in Edmonton, went viral last week.

“There has been some speculation online that I took part,” Pitt said. “I would like to assure my constituents and all Albertans that I had nothing to do with this.”

She said the photo, which shows Kenney, three of his cabinet ministers and one other government colleague on a rooftop patio having drinks, shows COVID-19 health restrictions were violated.

“Much of the public concern about this incident has been about the hypocrisy of senior officials breaking their own rules,” Pitt said. “I can certainly understand these concerns.”

Pitt went on to say as a proud conservative, former business owner and the Alberta legislature's representative for Airdrie-East, it has pained her to watch small businesses be the constant target of back-and-forth government restrictions.

“I see the extreme amounts of uncertainty. I see the unmeasurable levels of creative problem-solving being invested into working with COVID-19 restrictions, only for the restrictions to change over and over again,” she said. “I see the stress on so many suffering business owners and their families, and I know as well as every other Albertan that many of these businesses will not make it.”

At the time the photo was taken, Stage 1 restrictions allowed for restaurants to operate patio-only service. According to the restrictions, up to four members of the same household were allowed per table, or three people from different households if they live alone and are with their two designated close contacts.

“The premier had a restaurant dinner on his patio with seven friends, and it remains unclear to Albertans why a restaurant owner can't have larger groups on their patio,” Pitt said. “I am calling on the premier today to make the rules more consistent, to give businesses fairness, and to allow restaurants to safely operate in the same fashion in which the premier just portrayed.”

Despite holding the position of Deputy Speaker of the Legislative Assembly, Pitt has been at loggerheads with Kenney for months over his handling of the COVID-19 pandemic. Earlier this year, she joined a national caucus of politicians who were against government restrictions – including her own. She later left the group in April after another member compared the Ontario government’s 28-day lockdown to Adolf Hitler’s Nazi Germany.

But just a few days after departing that group, Pitt joined 16 of her UCP colleagues in signing a joint public letter that criticized Kenney’s implementation of additional public health restrictions in Alberta.

Since Pitt and other UCP MLAs voiced criticism of the photo, Kenney officially released an apology on June 8, after days of receiving backlash in the media.

“For the past 16 months, I have tried hard to observe the public health rules,” he said. “I thought it’s important for me to lead by example. I have to admit, I haven’t always done that perfectly.”

Kenney said he thought because the patio event and photo in question took place on the official launch of Stage 1 of the Alberta government’s reopening plan – which allowed for outdoor gatherings of up to 10 people – he thought it was prudent to do the scheduled work meeting outside on the patio.

“We took precautions to do it in a distanced way,” he said. “There is no doubt throughout the course of the meeting [that] people came within the two-metre distance that is laid out in the guidelines. I regret that. I regret the perception this has created.”

During his apology, he said he takes full responsibility for the event and the backlash it resulted in.

“I was of the clear view that we were complying with the rules,” he said. “I have to take responsibility for that. We have to set an example. I want to sincerely apologize for letting you down.”

About the Author: Jordan Stricker