Giant 'murder-hornet' with painful sting discovered in BC

Just a couple of weeks ago, the first-ever Asian giant hornet nest in the U.S. was discovered just south of the B.C. border in Blaine, Washington.
Nov 5, 2020 11:15 AM By: Elana Shepert 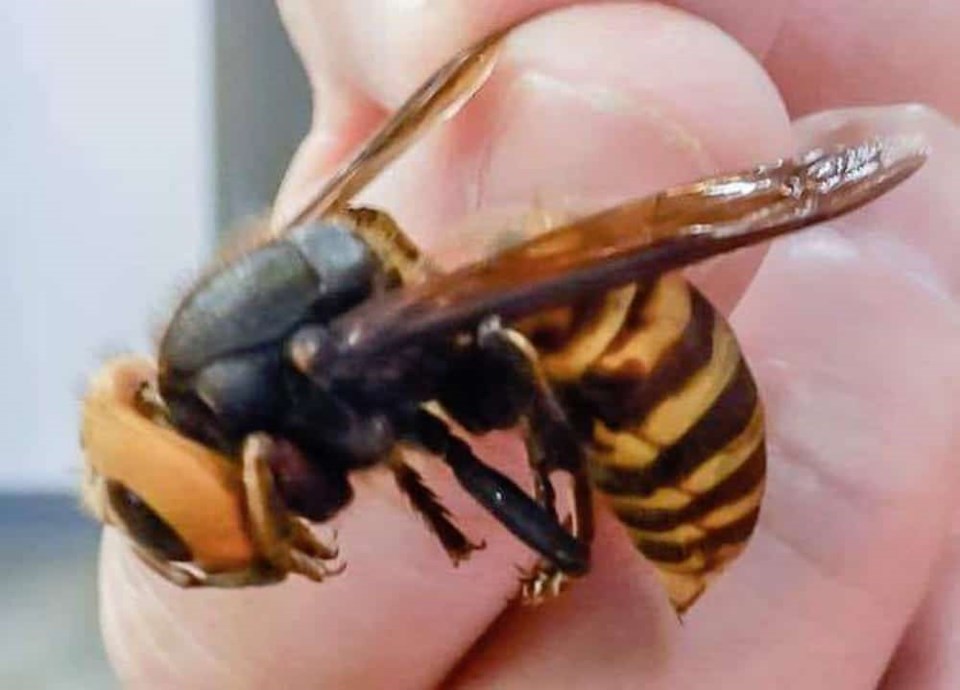 An Asian giant hornet was discovered in Abbotsford this week, according to a government information bulletin.

Beekeepers and residents in the area are asked to report any Asian giant hornet (Vespa mandarinia) sightings, following the discovery of one of the insects in the 7000 block of Bradner Road on Monday, Nov. 2.

In early October, a sterile worker was discovered in B.C. close to the United States border. Provincial Apiculturist Paul van Westendorp told Vancouver Is Awesome in a phone interview that finding the worker was less concerning than finding a queen.

"When you deal with a queen they will have the capability to produce, and that's what we don't want," he explained.

Westerndorp noted that the B.C. specimen was found approximately two-and-a-half kilometres north of where the nest is located.

Single hornets were found in White Rock and Langley in 2019, and on 0 Avenue in Langley in 2020. A nest has never been found in the Fraser Valley or Lower Mainland.

Survey efforts in the Fraser Valley in 2020 have focused on surveillance and trap monitoring along 0 Avenue with the support of local beekeepers and other organizations, as well as in Nanaimo.

The buzz about Asian giant hornets

An invasive species, the Asian Giant Hornet (Vespa mandarinia), is commonly referred to as the 'murder hornet.' Normally found in the forests and low mountains of eastern and southeast Asia, it remains unclear how they arrived in North America. Their moniker — perhaps better suited for a comic book title or rock band name — was coined in Japan.

Despite the presence of more specimens and the discovery of a nest, Westerndorp says it isn't a cause for mass hysteria. While they can be dangerous when their nests are disturbed, they are not actively attacking humans. That said, he emphasizes that you should not disturb their nests--which are typically located on the ground or in crevasses.

Disturbing a nest will put them on the attack. And a sting packs a mighty wallop.

A Vancouver Island man says the sting felt as though hot thumbtacks had been stuck into his leg. Further, he experienced “throbbing muscular aches” in his legs for about 24 hours.

• If you find a nest, do not disturb it. Leave the area.

• Stings are rare but could occur if the nest is disturbed.

• Because of the larger amount of venom injected, a sting can be very painful and cause localized swelling, redness and itching.

• Treat a sting similar to wasp or bee stings by putting ice or a cold compress on the site to reduce inflammation and spread of venom.

• Do not rub the site because it will spread venom.

• People who are stung multiple times (10 or more) have a higher risk of developing toxic or allergic reactions, lightheadedness or dizziness.

• People who are stung multiple time or who develop symptoms of toxic or allergic reactions are advised to seek medical attention immediately.

• If you think you’ve spotted an Asian giant hornet, call the Alberta Invasive Species Council at 587-999-0954, or via mobile phone app

- With files from Carla Wilson / The Times Colonist and The Canadian Press.

About the Author: Elana Shepert