'It's a sombre place': Broncos permanent memorial in the works

“From everything we've talked about, we know that their hearts are in the right place, they're going to try and do something to honour the Broncos. And I'm sure they'll do a good job,” Chris Joseph said.
Nov 5, 2020 4:15 PM By: Jennifer Henderson, Local Journalism Initiative reporter 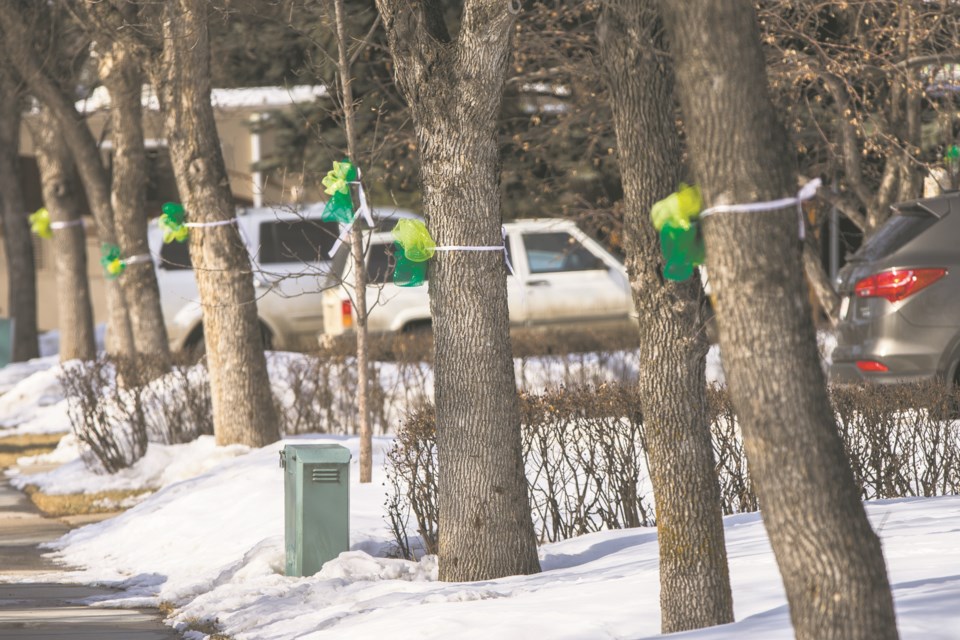 Green and yellow ribbons, the same colours at the Humboldt Broncos, lined the street along Lorraine Cres. in St. Albert following the tragic bus crash in April 2018. A permanent memorial at the crash site is now in the works.

Chris Joseph said a permanent memorial for the Humboldt Broncos crash site is “a must” for the families who lost loved ones in the 2018 tragedy.

Preliminary plans are underway to set up a permanent memorial site where the 16 members of the Humboldt Broncos team lost their lives in April 2018.

The crash happened at an intersection around 30 kilometres north of Tisdale, Sask., as the Broncos were travelling to play what was likely the last game of their season against the Nipawin Hawks. Sixteen people lost their lives while another 13 were injured.

Joseph lost his son Jaxon in the crash, along with three other St. Albert players – Logan Hunter, Conner Lukan and Stephen Wack.

Currently at the intersection, a temporary memorial has been set up, including hockey sticks, jerseys and crosses, to help remember those who passed away in the crash but Joseph said a more permanent fixture would be more fitting for the location. After sitting outside in the wind, snow and sun, the memorial is becoming weathered.

“We think it's a must. In the first two years, we really didn't focus on (a memorial) at all, because we were just focused on the day to day and getting through some of the grief,” Joseph said.

“Now I think a lot of the families are in a more stable place that we want to start thinking about it.”

The memorial is being championed by some of the family members and a professional group organizing with them, and Joseph said he is confident they will do a great job.

“I suppose better late than never, but that is pretty late. We don't want that,” Joseph said.

Right now, Joseph said he doesn’t know what the memorial will look like, but said it would be nice if there was a shelter with some sort of museum there – but he noted that would come at a high price tag.

“From everything we've talked about, we know that their hearts are in the right place, they're going to try and do something to honour the Broncos. And I'm sure they'll do a good job,” Joseph said.

The father has visited the crash site at the intersection of Saskatchewan Hwy. 35 and 335 four times and said it is an emotional experience to be there.

“It's not a fun place to be. We get a lot of emotion going there but we are not afraid to go there,” Joseph said.

“Sometimes we feel a little bit of a calling, like we have to go visit it.”

Joseph said the first two times he went he “absolutely melted down” but other times it has been more of a silent and reflective experience.

“It's a sombre place for sure,” Joseph said.

“If there is something there that is permanent, (that) will probably reflect back on the days of the makeshift white and green crosses with writing on it.”