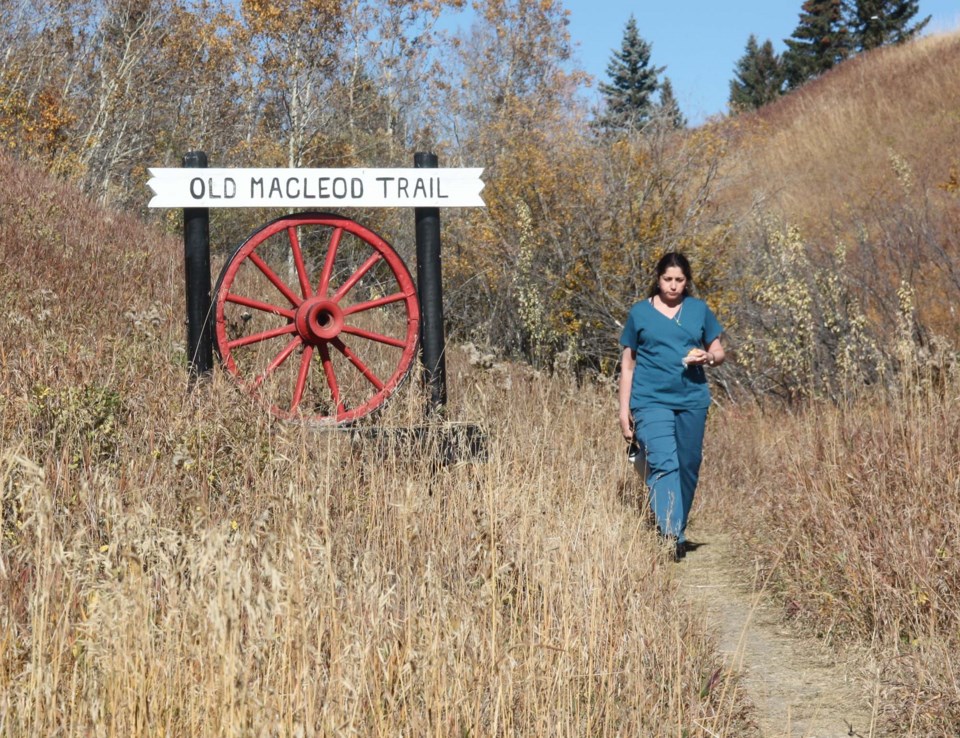 An historic trail in the heart of downtown Okotoks is now officially under protection.

A seven-hectare section of land east of Northridge Drive between Elma Street and Mountain Street, where the Macleod Trail runs, was designated a municipal historic resource by Okotoks town council on Sept. 28.

The designation followed council’s decision in February to place an environmental reserve on the same section of land, protecting the area from development.

“Council felt it was really important we protect this amazing parcel of land that sits right in the heart of Okotoks,” said Allan Boss, culture and heritage manager.

He said adding a municipal historic resource designation to the environmental reserve is a second layer of protection on the Macleod Trail to ensure it is not developed or compromised.

A portion of the original trail, which can be found at the end of Elk Street, north of Elma Street, is marked by a wagon wheel, which was installed by Foothills historian Bill Dunn in December 2012 to recognize its important in Alberta’s history. The marker was one of 17 Dunn erected along the Macleod Trail route.

Boss said the Old Macleod Trail, which went from Fort Benton in Montana through Fort Macleod to Fort Calgary and on to Fort Edmonton, played a major role in development of southern Alberta and in the establishment of the Village of Okotoks.

He said travellers came from Calgary, which was a two or three-day trek, and stopped at the base of the escarpment to rest and stock up on supplies, which allowed business to develop. With a river nearby, it didn’t take long for a village to rise up, laying the foundation for modern-day Okotoks.

The Macleod Trail wasn’t the first to run through the area, he said – some evidence identifies the route as part of the Old North Trail thousands of years ago, which was used by First Nations people to travel from Mexico to the Arctic.

With rich history, it was a natural piece of land to include as a municipal historic resource, he said. It will be overseen by the Standards and Guidelines for the Conservation of Historic Places in Canada, a set of federal policies that control the development or improvement of heritage sites.

“If we wanted to do something with the trail that runs there, we’d work through the standards and guidelines to find the right way to do it and make sure we weren’t disturbing anything that might be there,” said Boss.

He said it was a long process to get the Macleod Trail designated but it was well worth the effort.

About the Author: Krista Conrad