OTTAWA — Parliament's budget watchdog has called out the Trudeau government for not providing information on billions of dollars in planned federal spending.
Nov 4, 2020 1:45 PM By: Canadian Press 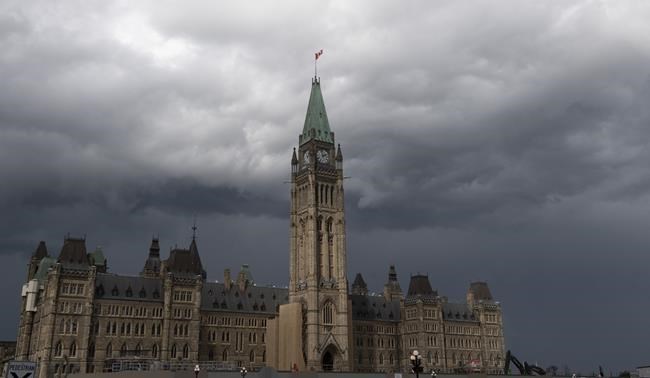 Storm clouds pass by the Peace tower and Parliament hill Tuesday, Aug. 18, 2020 in Ottawa. Parliament's budget watchdog is calling out the Trudeau government for not providing information on billions of dollars in planned federal spending. THE CANADIAN PRESS/Adrian Wyld

OTTAWA — Parliament's budget watchdog has called out the Trudeau government for not providing information on billions of dollars in planned federal spending.

The parliamentary budget office made clear its concerns about the Liberals' spending secrecy in two separate reports released Wednesday.

The first accused the government of having failed to provide detailed information in its recent request to Parliament for $79 billion in added spending authority.

While the government says most of the money is intended for COVID-19 relief, the PBO suggested Parliament was hamstrung in its ability to oversee government spending because of the Liberals' secrecy.

"While the sum of these measures is significant, the amount of information that is publicly available to track this spending is lacking, thus making it more challenging for parliamentarians to perform their critical role in overseeing government spending and holding it to account," reads the report.

The budget office went on to note that the Liberals have yet to provide a complete list of COVID-19 measures announced so far, or updated estimates on how much those measures will cost.

"This lack of data is not a result of it not being available," the PBO report added. "The Department of Finance had been providing biweekly updates to the standing committee on finance, but stopped when Parliament was prorogued in August."

The budget office has taken it upon itself in recent months to start tracking the estimated costs of the government's COVID-19 relief, with the most recent tally coming in at more than $176 billion this year.

While the PBO estimated the government will shell out at least $600 million per year for pay equity, it says that number only accounts for about 30 per cent of jobs affected by the new pay-equity law.

The budget office said the real cost will be substantially higher, but that while the Trudeau government knows how much, it refused to provide the information, citing cabinet confidence.

It went on to encourage parliamentarians to push the government to be more forthright with its information.

This report by The Canadian Press was first published Nov. 4, 2020.