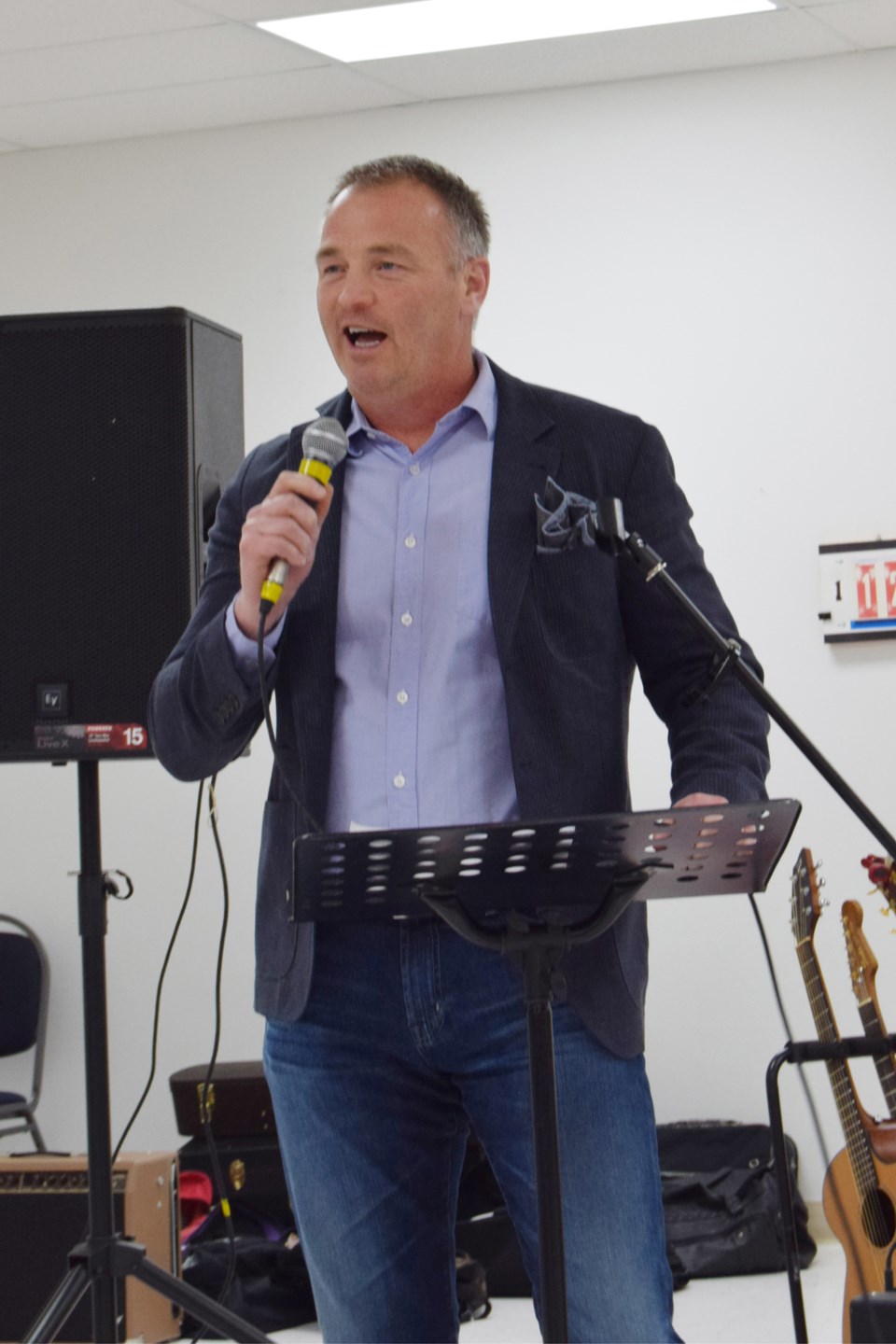 Dr. Kent Bernes, pictured here at the Rural Physician Action Plan Skills Day Dinner in March 2019, recommends that Barrhead residents should not be apprehensive about receiving the COVID-19 vaccine saying the science behind vaccines is pretty solid.Here he is pictured addressing the students who took part in Rural Health Professions Action Plan Skills Day in Barrhead at a dinner in March 2019.

The first residents in Barrhead have received their first round of vaccinations.

That is what Barrhead's medical director Dr Kent Bernes told the Leader last week after we reached out to Bernes to see whether he or any of his colleagues felt any trepidation about receiving the first doses of the vaccine.

Alberta received its first shipment of COVID-19 vaccine from Pfizer-BioNTech on Dec. 14.

A day later, Alberta Health Services started its phased vaccination program,  starting with frontline health professionals in intensive care units (ICU) and acute care sites in Edmonton and Calgary before expanding to other regions as well as residents of long-term care facilities.

Bernes received his first inoculation on Dec. 24, while the residents of Barrhead Continuing Care Centre and Shepherd's Care were vaccinated a few days later.

Because Bernes received the Pfizer-BioNTech, which requires ultra-cold storage, he had to travel to the Alberta Health Services (AHS) clinic in Edson, while the residents at the senior residences here received the Moderna vaccine can be stored at a much lower temperature and allows the vaccine to be administered on-site. Both vaccines require a second dose, roughly three-weeks to a month after the first.

The only hesitation he heard from any of the local health professionals about receiving the vaccine was scheduling.

"The only fly in the ointment was that it happened over the holidays, which made scheduling difficult in some cases," Bernes said, citing the example of potentially being on-call. "When you have to travel for two hours, one way, it is a little inconvenient but not impossible."

In the next stage, the province vaccines will be continued to be offered to key populations working in ICUs and longterm care and will be expanded to staff in designated supportive living facilities (DSL), along with their residents regardless of age, and those working in emergency departments.

In subsequent stages in Phase 1, vaccines will be offered to seniors 75 and over regardless of where they live, as well as First Nations and Metis 65 and over living in an Indigenous or Metis communities or settlements as well as healthcare workers in medical, surgical and COVID-19 units or operating rooms will also receive vaccines.

In Phase 2, which is hoped will begin in early April, AHS will continue to target other high-risk populations which have yet to be determined before the vaccines are offered to the general public sometime in the fall.

Of course, the timeline is dependent largely on when and in what quantity the province receives future vaccines.

And although he realizes some people might be reluctant to receive the vaccination because of wariness of vaccines in general or the speed which vaccines were developed, Bernes hopes Albertans will seriously consider being vaccinated when their time comes.

"Statistically, if you look at the adverse effects of vaccination versus the potential impact of the disease, I think your lowest risk is with the vaccination. The science is pretty solid and it is going to be the solution to defeating this pandemic," he said.