If ever there was a Canadian love story about man and machine, it would be the Avro Arrow interceptor, long recognized as being 20 years ahead of its time. From the time of its inception in 1953-54 until the day the program was cancelled on Feb.
0
Feb 27, 2019 11:00 AM By: Alberta Prime Times 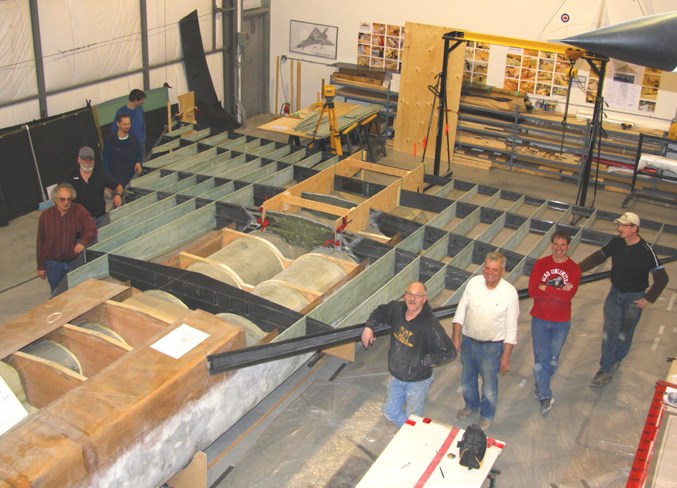 The recreation of the Avro Arrow is underway. Photo by Jan Rose

If ever there was a Canadian love story about man and machine, it would be the Avro Arrow interceptor, long recognized as being 20 years ahead of its time.

From the time of its inception in 1953-54 until the day the program was cancelled on Feb. 20, 1959 by the John Diefenbaker government, the CF-105 has taken on legendary status. The wish of thousands who want to see the Arrow fly again will be realized, sort of, in about five years when a 60% scale replica, under construction in the Avro Museum hangar at Springbank Airport, undergoes taxiing tests prior to flight testing.

This is no mere model airplane.  The plane's total length will be 46 ft., the wing span 30 ft., and it will be powered by two jet engines. According to the specification sheets, the cruising speed will be 926 km/h (500 knots) and, like the original, the cockpit seats two.

“The genesis of the project had its start in 1997 when someone floated the idea of building a replica after CBC television aired a documentary about the legendary plane,” says Michael Ward of the Avro Museum. “The models used in that documentary were constructed and flown by one of the museum’s founders, Doug Hyslip, who received a Gemini Award for the construction of models and flight sequences in the movie.”

Since that start 21 years ago, more than 19,000 hours of volunteer time has been spent in development, design and testing plus over 30,000 hours on the actual construction of the replica.

Financing for the project comes from various sources that include memberships, donations, and casinos. The replica is being constructed using fibreglass and carbon fibre. To date, more than $400,000 of the $1.5 million estimated total cost has been spent on materials, the most expensive being epoxy, carbon fibre and fibreglass cloth.  When sheets of carbon fibre are bonded to  each other the resulting panel looks like a thick ceramic sheet.

“Not a screw or bolt was used in the assembly to date,” says Ward.

Thousands of design and engineering drawings of the interceptor were located by sleuthing and word of mouth as news of the project migrated through the grapevine, Ward says.

“One gentleman in Ontario had a massive hoard of documents. One of the volunteers drove down and purchased a trailer to bring them back.”

A few months ago a man, whose father worked on the Arrow when it closed down, asked them if the museum would like to have a titanium turbine blade from the Orenda Iroquois engine, destined for but not actually used in the Avro Arrow.

“This happens all the time,” Ward says.

The opportunity to work on the once-in-a-lifetime project has proven irresistible to many volunteers, ranging from those with an interest in aviation, amateur and current civilian pilots, a former aircraft maintenance engineer to a retired Air Canada instructor pilot. Other volunteers include business consultants, accountants, business owners, oil and gas personnel and those with just a keen interest in aviation. Of particular value to the project is Paul Gies, the president of the Avro Museum who is currently constructing several “home built” aircraft in addition to being what Ward describes as an “electronics wizard.”

To get a feel for flying the Arrow, there is a X-planes flight simulator with four large screens as part of the restoration project. Ward says the volunteer Air Canada instructor pilot quipped that the simulator was better than anything his employer had.

A.V. Roe Canada Ltd was a subsidiary of the Hawker Siddeley Group of Great Britain, which owned 60%. The company grew to be the third largest employer in Canada by 1959, employing some 14,300 people at the time of the cancellation of the Arrow. The company shut down in 1962.

Canada's loss was American's gain: many capable engineers and technicians found employment with the National Aeronautics and Space Administration (NASA) which gave a huge boost to the American space program.

So what inspires dozens of volunteers to spend thousands of hours working on this project, week after week and year after year? Ward doesn't believe the attraction is to be a part of history, even 60 years down the road.

“This aircraft we're building is a pretty spectacular aircraft. This is a high performance we're building that replicates the Arrow," he says, adding “the drive is to be part of  something that is really great in terms of remembering what this was.

“The project's intent is to not just build an aircraft. The whole purpose is to keep the memory of A.V. Roe Canada Ltd. alive."