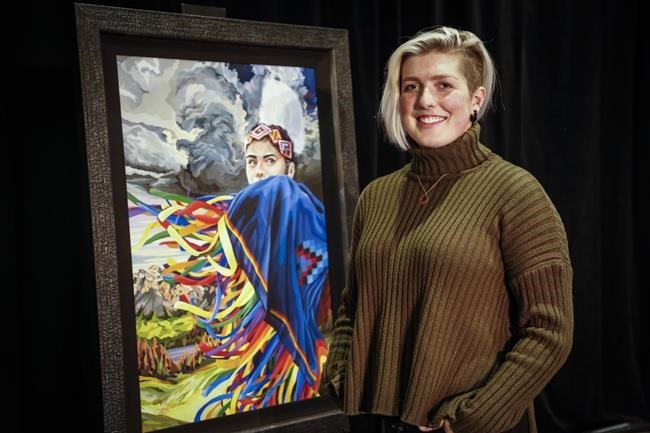 CALGARY — Lexi Hilderman hopes the dark, storm clouds in the background of the 2021 Calgary Stampede poster are in the past.

The 22-year-old Calgarian's artwork of a young Indigenous dancer with rainbow ribbons flowing from her costume, Rocky Mountains and dark clouds in the background, was unveiled Tuesday as the winning placard for next year's Stampede, although it has yet to be determined if the event will go ahead.

This year's Stampede was cancelled due to COVID-19.

Hilderman said she had seen a picture of Katari Righthand of the Siksika First Nation and thought of her as a symbol of hope for the future, so based the poster on the dancer.

"Her Blackfoot name was given to her after the 2013 flood and it's 'Rainbow Girl,' which symbolized the idea of hope, growth and movement past the storm," Hilderman said.

"Thinking about even the 2013 floods and comparing that to now, where we are in this pandemic, it's really important to have some sort of beacon of hope and optimism and something stable so we can move forward."

Flooding seven years ago devastated parts of Calgary and other areas in southern Alberta. But the Stampede went ahead that year, as it did through the Great Depression and the Second World War.

However, with COVID-19 cases surging in a second wave across Canada, the future of the 2021 western celebration remains in doubt.

But a senior Stampede official said planning has to continue.

Steve McDonough, first vice-chairman of the Stampede's board of directors, said his fingers are crossed.

And, he said, the winning artwork, given a blessing by a native elder, reinforces that optimism.

"We want to show what the future could be," McDonough said.

"We would love to have a Calgary Stampede. What it looks like? I can't tell you that today."

The Stampede, one of the richest rodeos in the world, usually attracts more than 100,000 people a day over its 10-day run, which includes a parade, a fair, a midway and a nightly rodeo.

McDonough said if everything works out, the Stampede would incorporate safety protocols and physical distancing.

"It takes a year to plan the Stampede. We can pivot, you know. We can cancel."

The Stampede is tentatively scheduled for July 9-18.

This report by The Canadian Press was first published November 17, 2020.

Dangers of impaired driving a focus this holiday season
Nov 27, 2020 11:10 AM
Comments
We welcome your feedback and encourage you to share your thoughts. We ask that you be respectful of others and their points of view, refrain from personal attacks and stay on topic. To learn about our commenting policies and how we moderate, please read our Community Guidelines.